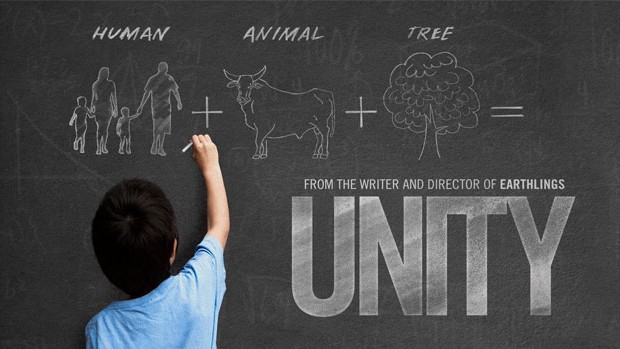 Unity isn’t the documentary it proclaims to be. It is an annoying, self-righteous finger waving rant that is at once pretentious and florid and broad and overly simplistic. The film’s writer and director Shaun Monson last made the 2005 documentary Earthlings and since then seems to have watched Terrence Malick’s The Tree of Life (2011) several times to simulate his hippy-like aspirations. The film claims to be about how humanity is born collectively in time and space, including people and animals, and questions why we’re so terrible to each other if all of nature is born equally. It uses over one hundred celebrity voices—including heavyweights such as Joaquin Phoenix, Geoffrey Rush, Marion Cotillard, Joel Edgerton and others who should have known better—with stock footage of the various atrocities of world history, occasionally juxtaposed with external shots of the Earth. To sound deep, each celebrity voice over whispers their lines and trails off like they’re reading every sentence with an ellipsis. These questions and statements are allocated to five different chapters labelled: Cosmos, Mind, Body, Heart and Soul.

It certainly has a lot on in its mind but many of these questions and discussions are preaching to the choir of global suffering and a lot of what is said by the celebrities makes it seem as though they’re mouthpieces for Monson’s internal thoughts. How valuable are a lot of these questions when they’re the topical ones that everyone already asks but will never resolve? The voices pose “deep” questions such as: “How many times do we have to die in war to realise how absurd it is?” It’s like asking the question out of moral righteousness not because anyone has the answer. Also, why did Monson think it was a good idea to have celebrities talking about people being egotistical and overly consumerist? It doesn’t come across like the celebrities are being self-critical either, which means the hypocrisy on display is unbelievable at times. The film’s philosophical discourse is naive and removed from understanding the nuances of world politics, like when it asks why we can’t share power peacefully. The film is also cluttered with impenetrable narration about how we’re the nebula and that the human experience is being incarnate. Most annoying though is that after broadly summarising world atrocities and omitting others—the Iraq War and September 11 aren’t mentioned or at least not in any detail—the film switches to a rants about how terrible people are for eating meat. Monson became a vegetarian in the 1990s and then decided he was a vegan but stuffing this in right after a summary of violent history seems strange. According to his film, we’re on a treadmill of life by living through killing. There are laughably absurd statements like animals are healthier than people because they don’t eat as much meat. This is an example of the film being overly broad and imbalanced, failing to account for simple variables like how humans are more physically active than animals on a daily basis. Did you know that Joaquin Phoenix is a dedicated vegan? It’s at least one interesting thing to take from this segment of the film.

When reaching its conclusions about how to resolve some of the global issues lame clichés like learning to love and feeling the suffering of every creature are drawn upon. This highlights substantially the film’s weakness. Without specific case studies or targets its asking huge questions it can’t possibly answer and it purports to be deeper and more thoughtful than it actually is. Surprisingly, not that many images accompanying the voices resonate for very long, except perhaps the prolonged opening involving the slaughter of an animal. Perhaps Monson could also have used more contemporary examples throughout history rather than drawing from obvious sources like the Nazis or Hitler as an example of people electing a terrible leader. Why not a more provocative contemporary choice such as George W. Bush? A lot of the film is baffling and other parts are irritable like having the celebrities talk about egotism and the consumerism of the world, which is far too rich and hypocritical. It is not for cynics and though some might buy into the film’s supposed philosophical ramblings, much of it is grating and righteous. It would seem like the emperor has no clothes and not enough protein.

Summary: It is an annoying, self-righteous finger waving rant that is at once pretentious and florid and broad and overly simplistic.