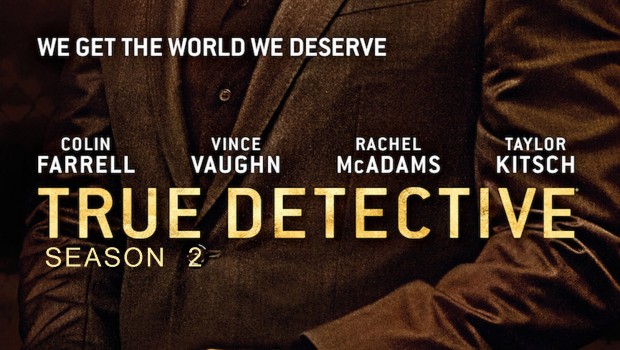 Summary: A wonderful shot, gritty modern detective story with characters that get put through the ringer.

HBO… I just want to let that sit for a moment. There was a shift a number of years ago from normal television filming to a more cinematic filming style, more attention paid to sets, characters, locations the whole thing. HBO has played a big part in that shift and True Detective certainly benefits from that shift.

The series opens with three separate law enforcement agents from three different precincts all working their normal territories with varying degrees of success/failure. When officer Paul Woodrugh (Taylor Kitsch) comes across a murder victim whilst on a night ride, he, Ray Velcoro (Colin Farrell) and Ani Bezzerides (Rachel McAdams) are thrown together to form a task force challenged with uncovering what happened. What we soon discover is that the murder victim was a key figure in a large legitimate business deal that was about to pull a mobster out of his world of crime and into the world of above board business dealings and his death has thrown a spanner in those works and it would seem have dug up some things from the past that others would remain left buried. I have to say that I never got to watch season one of True Detective so I don’t have that to compare this to but I thoroughly enjoyed the show. I was therefore quite surprised to read that it was not received very well and that Vince Vaughn seems to have copped a significant amount of flak for his performance. Personally I found it very refreshing to see Vince being someone other than Owen Wilson’s partner in crime, getting a chance to show some menace and delivered my favourite response to “gangsters grills” “What kind of way is that to greet the world”.

I also found the interplays and interactions between all the cast both principle and supporting to be quite believable and enjoyable to watch as their story arcs played out… and story arcs are something that get quite a workout in this series. It is often said that actors gravitate towards scripts that provide a good arc for their character… something that will allow them to show a range of emotions and dig into what makes the character tick. True Detective presents us at first with a group of what seem to be floundering stuff ups… but we learn as things progress that they have very layered and complicated personalities. They all seem to be seeking redemption of some sort, even if they don’t realise it yet.

I also found Taylor Kitsch’s character of Office Paul Woodrugh quite refreshing. It’s not often you see a character portrayed as being gay (or at least bisexual) and not really being able to accept that or understand how to be himself (perhaps there are plenty of examples and I just haven’t been watching them). It was very interesting to see the struggle he had within himself trying to come to terms with who he was, denying his homosexuality but then also having that pull towards acting on those suppressed desires. He didn’t play the character as a stereotype at all… but simply as a real person who was conflicted and I suspect there are still (unfortunately) many people out there who can relate to the pressure they feel to hide those feelings away and play things straight. Much like seeing Vince Vaughn as a tough man was refreshing, it was good to see Rachel McAdams play someone with a lot more darkness and grittiness to her character and she did so with great gravity, the results of her decisions clearly expressed on her face (and in some cases whole body) at times. Then there’s Colin… Colin Farrell almost seems to be playing an alternate universe version of himself, a heavy drinking, potentially violent person who at his core is driven by a sense of justice… but it works… it works very well. We first seem him talking about custody of his child and it seems like he is being hard done by… then we see what he’s done (and continues to do) and we understand why things aren’t going his way… but the catalyst for it all is such a tragic event that many of us could imagine taking a similar path as a result of experiencing such trauma. If you look at other reviews around the web you will likely be hesitant to take a look at True Detective Season 2… if you have a chance though I think it is worth a watch… if you like beautiful visual stylings, gritty unpleasant drama then it’s certainly worth a look. If you have any interest in the behind the scenes of tv/film there is also an excellent “making of” of one of the pivotal events in the film that is a fascinating day by day explanation of how they tackled a logistically trying event that needed to go off without a hitch to both make sure everyone involved was safe… but also to make sure the scene had the impact it needed.