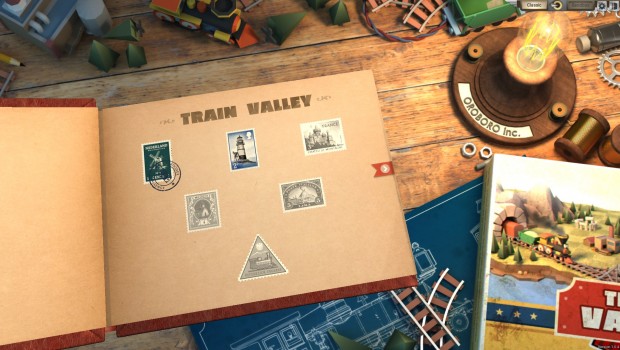 Summary: A puzzling management sim where you direct trains through history and across the globe.

Train Valley is a game I wish I was good at. The premise is straightforward enough: a number of stations appear on a map and you must connect them with railway lines, directing trains between the stations by ensuring the ‘switch’ at each intersection is pointing the right way. Each logic puzzle introduces a new element or challenge, like a bridge or a tunnel, all of which seem fantastic in theory, but there’s something about this game that I just cannot wrap my head around.

The first level is a tutorial that calmly steps you through the process and lulls you into a false sense of security about how relaxing this game will be, but the difficulty ramps up quite quickly, leaving you with stations in a whole range of challenging positions that you somehow need to navigate to. Whoever approves the building plans for these stations is not in my good books. Each level has challenges in addition to the standard ‘make your trains do things and don’t go bankrupt’, like spending a specified amount of money, not demolishing any tracks, or ensuring your trains don’t crash (which sounds like a no-brainer). As much as avoiding crashes is logical, it can be difficult to achieve. I keep accidentally letting my trains get so impatient that they leave their stations before I’m ready. I’m absurdly bad at remembering which trains were there first and, while each train has a decreasing amount of money attached to it, always sending the train with the lowest counter is not a foolproof method. I’ve been inadvertently responsible for so many train crashes that I’m surprised the game still lets me open it.

This particular issue doesn’t feel as though it’s entirely my fault though. There are a few important aspects of the game—such as this detail of when a train will leave on its own—that are obfuscated for seemingly no reason. I’m reminded of Mini Metro—a similar, though much less graphically detailed train management game—and the very obvious shaking and pulsing of a station when it’s becoming overcrowded; I think I need similar flashing neon arrows in Train Valley, allowing me to focus less on memorising the order trains appear and more on how I am actually going to get them where they need to go. The recently released Germany DLC for Train Valley brings with it a range of newfound challenges (which, as I’m sure you’ve guessed, caused a difficulty increase that I didn’t really need). In one of the levels, a military bomber flew overhead and dropped bombs on my tracks, destroying them just before my train attempted to pass through. On another of the new maps—where the map is divided in two by the Berlin Wall—I struggled to even start the level, as each time I tried to make connections between stations through the one gap in the wall, I ran out of money. These challenges must be a welcome addition for those who had mastered the original four seasons of Train Valley, but for someone who struggles before she reaches the end of season one (Europe), the Germany levels were not my friends.

In addition to Europe (1830-1980), Germany is joining America (1840-1960), the USSR (1880-1980), and Japan (1990-2020). The challenges you face on each map are inspired by historical events and the trains you are directing are designed to be ‘accurate’. Working my way through train history was interesting, if only because the events are familiar to me; I don’t know enough about trains themselves to be excited by the authenticity or be bothered by any inaccuracies. Not only do the trains change between these locations, but the scenery and music are notably different. The atmosphere in the Japan levels is probably my favourite, with cherry blossoms dotting the landscape and music that is heavily inspired by traditional Japanese melodies. The care and attention to detail in the scenes helps create a beautiful game.

As much as I would like it to be, Train Valley is not a game for me, but it is still a beautiful game. If you like puzzle games crossed with management sims and would like to direct trains through history, I recommend trying your hand at the base game and the ever-challenging Germany DLC.