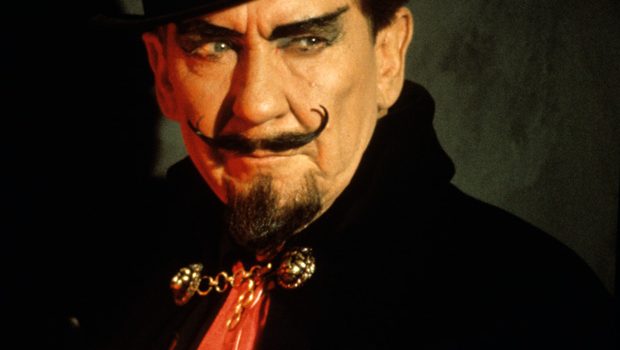 Summary: Portmanteau horror was all the rage in the UK in the 1960s as some classic UK actors bring to life short horror stories from the master who brought you psycho, Robert Bloch!

While Hammer Films were more well-known, Amicus Films also played in the same horror field for many years, and was responsible for many memorable horror films. This effort, Torture Garden, based on four short stories by Robert Bloch, is another in a long line of portmanteau horror films that stretch from the 1960s all the way to do (think V/H/S). A framing device (a visit to the fair allows Burgess Meredith’s Dr Diablo to scare and titillate a group of attendees) brackets what are effectively four short horror films packed into the 93 minute running time. Francis, who also later directed a portmanteau horror film, Tales from the Crypt, efficiently works through the disparate material. And disparate it is – Bloch, an acclaimed writer of horror fiction for almost fifty years, delivers a script that presents material that ranges from the (sort of) sublime (The Man Who Collected Poe), to the patently ridiculous (a killer grand piano. Really?) The participants in what is effectively a morality play, receive visions of their futures as Dr Diablo entices them to look into the future.

Pacing quickly through the stories, we see Michael Bryant face off against a possessed, man-eating cat (yes, you did indeed read that right) in Enoch. Androids feature in Terror Over Hollywood, where an unscrupulous starlet discovers that life at the top isn’t a bed of roses. The aforementioned grand piano appears in Mr Steinway, and, rather bizarrely, becomes jealous of its owner’s new beau. Finally, Jack Palance chews the scenario with Peter Cushing as two competing collectors of all things Edgar Allan Poe. What resides in the cavity behind the desk will shock you to your core (not really).

As you can no doubt tell from the tone of this review, this movie is not very good.

Frequently, it is awful. Films of this nature stand or fall on the ability of each story to capture the audience’s attendance. Where a single story movie has a better chance to raise the tension over the course of the running time, the frequent breaks as the narrative resets for the next instalment kill any chance of Torture Garden being a compelling experience.
The acting is variable (the female leads are not up to much and are clearly there for their visual, not acting, appeal) and it is sad to see great character actors like Peter Cushing slumming it in this very average fare. While it is certainly an interesting curio of a time when horror ruled British cinema, it says a lot that the most interesting actor to watch is the America Burgess Meredith, fresh off his appearances as the Penguin in the wonderful Batman television series.

The print is perfectly serviceable, with a slightly washed out feel typical of the era. The sound is a little soft, but that’s fixed with the volume control. There are no special features, nor is there even a scene selection option. To top it all off, take care when removing the disc from the case – for some reason, the case’s plastic is quite thin, so pushing the prongs too hard will result in you puncturing the case and the insert.