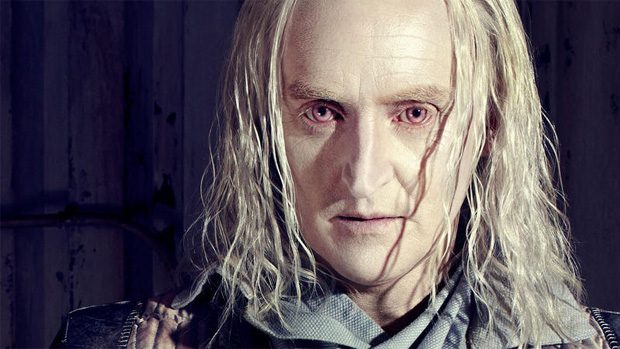 Q: What do you think sets Defiance apart from other genre shows?

It is such a unique sci-fi drama about aliens who are looking for a new home after their own homes have been destroyed. There was a battle called the Pale Wars that raged on for 12 years and in the town of Defiance humans and aliens worked together, for once. There was an act of defiance, hence the name, and it is now a melting pot of all colours and creeds.

Q: You play an alien on the show but is there any common ground between you and the character?

[Laughs] Well, I am a complete psychopath, so there is that, of course. I play a villainous, wicked character and I have gone very method with it. But seriously, of course, every actor brings something to a role and my hook with Datak is channeling my own experiences as a young actor moving to London from Scotland, then going to live in California. I am not sure if I ever actually re-invented myself whereas my character has had to do that, coming from another planet; but from my perspective, when you move to a new place, you do have to try and integrate. When I moved to London, I tried to do that and, when I moved to Los Angeles, I tried too and [laughs] I failed miserably. Q: How did filming the second season compare to the first?

It goes deeper than the first. The aspirations of the characters and the devious nature on which a lot of them tried to social-climb and get on in the first season, that has all been ripped away at the beginning of the second season. So, after all that calculating behaviour, they have been knocked on their backsides again. The humans are not too friendly and they are not too happy about having these aliens in town. We see a darker side to all the characters and there are a lot of skeletons in closets. Desperate times call for desperate measures and there are plenty of desperate times ahead.

Q: Do you have much input into storylines?

It is a very collaborative show and sometimes something you do like reacting to another actor’s line gives the writers an idea. It gives them a spark where they go ‘That would be an interesting way to take things.’

Q: How was it taking the show to Comic-Con?

Amazing. The fans are so well-informed and they sometimes know more about the show, more of the details, than we do. The fans are incredible. There is a real integration at these conventions, like a big party, with everyone hanging out. The fans quote lines from this show and other shows that any of us have been in in the past. They go ‘So, Tony, when you did Boardwalk Empire (2010-2014) why did you do such and such to your wife?’ and I have no idea what the answer is. Q: Didn’t you have an interesting audition experience with Jaime Murray, who plays Stahma Tarr on Defiance?

She was sitting on my knee and she was meant to be all calm and serene. At one point, I put my head on her chest and I could feel her heart beating furiously. She is brilliant at seeming calm on the outside but her heart was beating so fast. There is an adrenaline that kicks in, especially when you are playing villainous characters. When generals went into battle, it was adrenaline that kept them fighting and kept them alive.

Q: In what ways does Defiance reflect society at the moment?

The immigration theme is interesting because all over Europe and all over the world it is a big issue. Plus, sometimes we do not see our own potential; all we see is our differences. It is ‘You are Catholic’ or ‘You are a Muslim.’ As humans, we should be celebrating our differences. We are different but isn’t that beautiful? Isn’t it amazing? You know, when I talk about the show like this it makes me come up with ideas for the next season and themes that could be incorporated. [Laughs] Datak’s actually from Scotland, like me. He’s not an alien at all.

Q: Do you see Datak as a pure villain?

No, I do not. I think power corrupts. Absolutely, power corrupts and I think these people have been corrupted in the past. Someone once said to me about Shylock in The Merchant of Venice (2004): ‘Victim or victimiser?’ In many ways, these characters have been victimised but they are definitely victimisers as well. I have got a baby girl and it is interesting to think of the show in terms of my daughter’s future. There is a lot of inequalities in the show and about how men treat women, how women have to deal with that and how they have to progress. What is happening in some countries now, having to do with rape and stuff like that, is unbelievable and unacceptable and some things politicians have said are just as unbelievable. I do not want to go into all that, but women who watch the show and even some men will see these strong characters and go ‘I can believe in myself and I desire to be stronger.’ Fear is a state of mind and it is something governments make us feel. Q: Do you understand why fans enjoy binge-watching shows on DVD and Blu-Ray? Are you a binge-watcher yourself?

I am, yes. Time is so valuable to people now and they want to be able to watch things on the go. My mum called me recently and she went ‘Oh that Walter White, he is quite a character!’ I bought her an iPad for her 80th birthday and she watched five episodes of Breaking Bad (2008-2013) back to back, so she has become a binge-watcher herself.