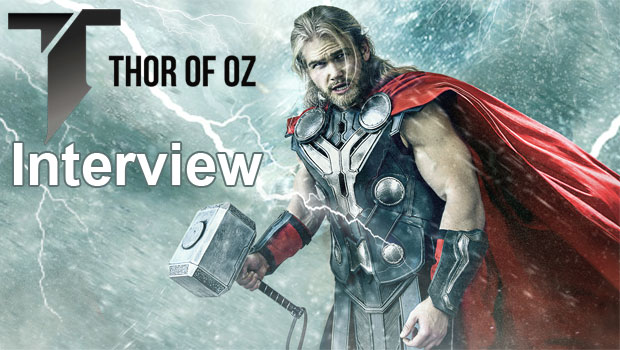 Welcome to Impulse Gamer Andrew (aka Thor of Oz)! So tell us how you became involved in cosplay?

Thanks for having me guys, it’s a pleasure and an honour.  I became involved in cosplay after growing my hair long.  I was frequently stopped by people in the street saying I looked like “Thor”.  For a laugh I decided to buy a Thor costume online.  I had some fun with it, took a few photos etc and at that point I got very keen on going to a Comic Convention (I had never been to one) to see how people would react.  I built my own Thor costume and took it to Oz Comic Con in Melbourne, 2015 and had a blast.  I met some really good friends that day. What drew you to the character Thor?

I hadn’t actually read about Thor or seen any films until people started telling me I looked like him.  I thought I had better do a little research before trying to fulfil his character at a Con.  I find mythology very interesting and after finding out a little more about Thor, I really got drawn in, mostly by his strong physical attributes as I am a fitness enthusiast. Can you walk us through how you created your movie accurate costume of The God of Thunder?

I have to be honest in that I did very little “building” of the Thor costume that I have now.  It’s a collective effort – originally built by SKYLAR cosplay, who I had commissioned for the job.  They can be found on Etsy and are based in China.  They built the armour pieces (torso, bracers, boot armour, helmet) out of EVA foam.  The pants were made from vinyl, and the cape from my mother’s drapes (har-har!).  A really good friend of mine Arwin from “Doofus Creations” (yes, Doofus Creations. Fair dinkum) made some awesome modifications to it and also gave it a great paint job.

Originally I had built a Thor costume which I am a little proud of as it was my first go, but it is by no means movie accurate. When you first saw yourself in the mirror, what did you think?

I’ve been perfecting the look over the last 9 months.  If you look at some of the pictures on Thorofoz Instagram you will be able to see the development of it.

Particularly, from the last two events I have worn it to – Supanova Gold Coast and Melbourne.

I reckon it’s looking pretty good.  I am now working on an Avengers: Age of Ultron version of Thor. What’s the feedback been of your Thor costume from other cosplayers?

The feedback has been really positive and people have had some really nice things to say.

Stuff like “you look like the real Thor” and “are you related to Chris Hemsworth?” are pretty standard comments now.  Obviously I have nothing on the real deal, but it’s certainly not a bad thing to hear people say that.

Tell us about Mjolnir?

Mjolnir is one of the most fearsome weapons, capable of leveling mountains.  That’s taken straight from Wikipedia ;-)

My version is rubber, which makes it nicely weighted and safe so that kids don’t dong themselves on the noggin if they want to pick it up and play around.

Tell us your most memorable feedback about your costume from someone at a convention?

I’m usually trying to stay in character whenever someone approaches me, or I’m too stunned by other cosplayers and the effort they go to in making their costumes so sometimes it’s difficult to appreciate their comments on the spot.  There have been quite a few memorable moments at conventions, but probably the biggest stand-out was actually at my local post office where I met a Cosplayer Nikki.  Total stranger (at the time) approached me and said “please tell me you cosplay as Thor!?”  I wasn’t even wearing the costume!  We proceeded to take some selfies, exchanged numbers and we have remained friends since.

I like to entertain, put a smile on people’s faces and see their reactions when I walk around as Thor.

But mostly I like the atmosphere when you are at an event like ComicCon or Supanova, everyone is there to have a good time and escape reality for a day or two.  I’m yet to go to a Con incognito so that I can fully appreciate all the interesting things to see and do.  I’m going to try and go to as many Cons this year as my bank account will allow me to. Tell us your favourite convention and why?

To date, it would have to be Gold Coast Supanova this year.  I flew up with my Partner and good mate Logan-V, stayed in Boradbeach, caught up with a few top blokes I know up that way and hit the surf all 4 days.  Weather was perfect and there was generally a really good feeling in Broady.  I went to the Con as Thor Dark World both days, got invited for a few interviews with some friendly people, participated in the Cosplay Parade down the main street of Boradbeach, got my mug on the news and in two local newspapers AND had a blast filming up on the Titan (Tank) with the Garrison 7 cast and crew including Sue, Scott and his boys.  They are great people and I really did have a fantastic time up there, all the people I met at Gold Coast were just great.  It was good to meet people in person that I had been interacting with on social media too. Dressed as Thor, what’s been the funniest thing that has happened to you?

I live in Melbourne CBD so occasionally I’ll be able to throw on the suit and hop on the tram on my way to events.  I rode the tram all the way up Collins Street and got some really interesting looks and comments from commuters.  I can only imagine what some of them would have been thinking when they saw me hanging onto the rail and casually taking a ride, which to me makes it very, very funny. I was involved in an independent film this year, where basically a bunch of superheroes met at a local park and belt the crap out of each other.  We were in the sun filming for about 6 hours and I don’t think anyone thought to put on any sunscreen.  I went from a fair skinned Nordic god to a red tomato pretty quickly.  I got very burnt, I was so Thor.  The next day I had a beaming red face while marching down Swanston Street in Melbourne for the Australia Day Parade.  I was alongside the great people from Melbourne Costume Group who do amazing volunteer work at charities and fund raisers. I think I’m gonna have to go with Cap and his team on this one!

I like the majority of the characters on both teams but there’s no way I can go against the righteous Captain America. This year I’ll be Thor at OzComicCon Melbourne so I’d love to see and meet more people on June 11 and 12 at the Melbourne Convention and Exhibition Centre.

I will also be exhibiting at the Blood Tattoo Trilogy stall, portraying the character Auden, who is a Viking and trainer of Warriors since the beginning of time.  Blood Tattoo Trilogy is a graphic novel series which is being adapted for screen and I am very excited to be involved in that.  The writer Chrys Phillips is very enthusiastic about the whole project and I have to congratulate her on such amazing work.

I will also continue to appear as Thor at fund raisers, charities, birthday parties and corporate events alongside my fellow avengers and superheros in the name of good fun.

Thanks again for having me.