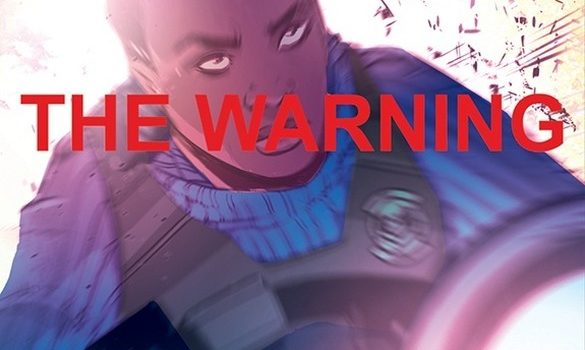 Summary: For a fast-paced story backed by tension inducing art look no further!

The Warning is a military action thriller of a series, where aliens have struck at Earth.  Issue #5 takes place shortly after the ISS MK 2 has been destroyed.  Humanity is in a danger, and it’s up to Team Gladiator Two Six to mount a counter to the invasion and try to save humanity.

Edward Laroche and Brad Simpson open this book with a beautiful scene of the ISS MK 2 crashing through the atmosphere.  The detail of the Earth below is excellent, with the forests, hills and coast all visible in the darkness and the colouring is exquisite.  The space station itself is in dire straights, with the fire of re-entry flaring around the intact pieces, while the smaller pieces are rendered as streaks of fire.

The humans in the series are also well drawn, with several scenes focusing in on characters faces, with black backgrounds behind them.  This allows Laroche’s work on the characters facial expressions to really shine and be the center of those panels.  It does a great job of ramping up the tension, especially early in the book.

I also enjoyed the aliens.  They look just humanoid enough to be familiar, yet possess enough features that are exaggerated or slightly off to make them seem both mysterious and dangerous.  Even their technology has a unique feel to it.  The weapon used when the first alien appears is relatively benign in appearance, but its’ effects are devastating and drawn in a truly eerie fashion.

The Warning #5 opens with the ISS MK 2 crashing to the Earth.  The ground team is tracking both the station, and three alien craft that launched from the main alien craft.  The first two land in Los Angeles and Burbank.  The third crashes down right through the command center.  Though the story begins with the tension already high, it’s at this point that it really gets cranked up.

Laroche creates scenes of utter chaos in the aftermath of the crash, as injured military personnel try to quickly pick the pieces back up and get help for the injured.  Then, the alien appears.  This is when an atmosphere of pure fear begins to permeate the story.  The full reveal of the alien is spread over several panels, and balances the fear of the unknown with the mystery of what this creature is.  Even the weapon it deploys operates in this fashion, with the reveal of what it does being drawn out.  I found this really deepened the mood of the story and made for a far more terrifying reveal.

The issue ends with an airstrike that is quickly interrupted by alien craft that quickly defeat most of the human craft.  The fact that the issue begins with humanity in a bad spot and ends with us being in a far worse situation makes for a good narrative arc.  Mankind being overrun by aliens is a story that has been used often in media, but not always well.  This book does a great job of infusing some real emotion and feel into this story, and making it both exciting and fear inspiring.

This is an enjoyable book.  The artwork of Laroche is strongly supported by the strong colour work of Brad Simpson, which goes a long way to flesh out and amplify the feeling of fear of the unknown that permeates this issue.  We know the aliens are dangerous as it starts, and this issue begins to flesh out just how dangerous they can potentially be.  As a human vs alien survival type tale, this one hits on every level.

For a fast-paced story backed by tension inducing art look no further! This alien invasion tale is 4 out of 5 stars!