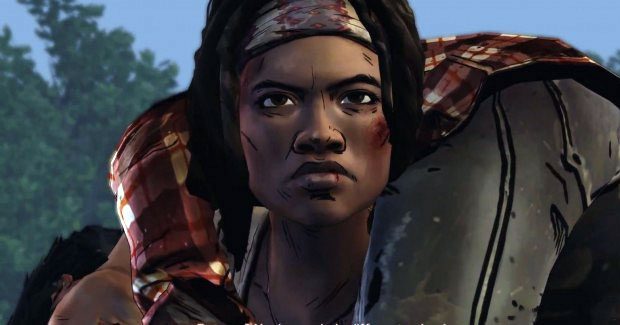 The Walking Dead Michone Episode 2 Give No Shelter PS4 review

Summary: The second episode of The Walking Dead: Michonne is faster-paced and more about the action, but things are more than a little rushed - though still immensely violent and satisfying.

The Walking Dead: Michonne – Episode 2 – Give No Shelter is the second part of Telltale’s point-and-click adventure mini-series focused on the titular bad-ass character and based on the original comic-book adaptation of The Walking Dead.

Kicking off immediately where In Too Deep left us and the final choice you made in the closing moments of the previous episode, Michonne has to rescue Pete from Norma and Randall’s interrogation and escape Monroe – with or without the help of certain people you decided the fate of previously. While the first episode was a slow burner which gradually set the scene for the new mystery surrounding Michonne’s dead daughters and the emotional guilt she carries, Give No Shelter plays out its events fast and frantic without giving players too much time to think and recover. It ultimately feels rushed and much shorter in gameplay length as a consequence, clocking in at well under 2 hours.

For instance, the rescue of Pete in the opening moments feels way too easy for Michonne and company to pull off when the first episode established Randall and Norma as two extremely careful, very capable survivors and set up the prospect of escaping as a daunting and almost impossible task – the tension and stakes built up from the previous episode is erased in seconds.

Give No Shelter thankfully introduces several new interesting characters for Michonne to interact with, but the opportunity to discover the background of these survivors is squandered quickly.  You’re hardly ever given a chance to get to know them before the action unfolds, and many of them aren’t available to speak too after their introductions. Whether the third episode will slow things down once more to give ample time to develop what should be a meaningful mini-story arc exploring Michonne’s character seems a little less likely after experiencing this episode. A recurring positive is many of the action sequences are well-presented and satisfying as they were in the first episode. As always, Michonne will be up against hordes of relentless undead walkers while being hunted by the hostile community of Monroe, and all of these fight sequences are presented in a stylised cinematic manner compared to past Telltale games.

The best sequences in this episode involve Randall, the formidable, well-written antagonist to our stoic emotionally troubled protagonist introduced in In Too Deep. Their inevitable violent confrontation teased in the previous episode’s closing moments and its repercussions depending on your choice is one many players will find difficult to decide – but it’s a safe call to say most will find the lead up to it satisfying, including the way Randall interacts with the player.

Whatever your viewpoint on its faster pacing and shorter duration, Give No Shelter and the choices it presents the player as Michonne lead to one hell of a ride many will be divided on, but undeniably intrigued, by for the final episode.