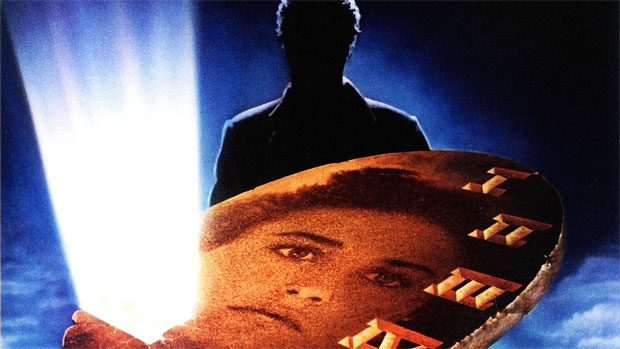 Rosemary’s Baby was swiftly followed by The Exorcist, perhaps the ur-text of taking your inspiration from Catholic teaching, and then The Omen, a pulpier examination of religious horror. Never again would American horror go back to the horror fantasias exemplified in Roger Corman’s adaptations of the works of Poe. Now, mixed in with the souring of Flower Power at the end of the 60s, and the urban and political corruption and decay of the 70s, horror began to feel more real, just as religion was releasing its stranglehold on the morals of Western society.

The Seventh Sign in many ways echoes its progenitor, Rosemary’s Baby. Like Mia Farrow’s Rosemary, Abby Quinn (a very young Demi Moore) takes centre stage as an expectant mother bothered by inexplicable events connected to her troubled pregnancy. While a sinister priest lurks in the shadows, gradually drawing nearer, another mysterious figure, David Bannon (Prochnow) also appears to have sinister intentions, being in the vicinity of events plucked directly from the Book of Revelations that appear to indicate the imminent threat of the Apocalypse.

While a cut above the horror fare served up during the 80s in terms of class and style, The Seventh Sign is a tepid thriller that marches steadily towards its conclusion. Abby’s pregnancy take centre stage early on, with strong performances by Moore and Biehn, who plays her lawyer husband desperately trying to save a handicapped murderer on death row.

As the Biblically inspired signs of the Apocalypse begin to appear, the movie rapidly moves its set pieces into place. While there is nothing surprising here, several events, particularly the blood moon and the final frantic moments in the prison and hospital are effectively realised. The ending of the movie, which eschews the confronting shock of Rosemary’s Baby’s finale, still packs an emotional punch and resonance, offering hope in the shadow of tragedy. While Biehn has little to do, he does shine as a crusading lawyer attempting to perform a miracle in a hopeless case. Moore brings plenty of light and shade to a character who has suffered tragedy and looks to be in danger of losing another baby. If we’re comparing this movie to Rosemary’s Baby, then Moore’s character is more appealing and proactive than Farrow’s colder, more reactive portrayal of a woman being manipulated into a terrible situation. Prochnow brings a studied ambiguity to his portrayal; originally much more sinister than Father Lucci (Peter Friedman), his portrayal softens into one of impotent anguish at the events around him. His performance elevates the movie whenever he is on screen.

In the end, The Seventh Sign is typical of 80s thriller/horror fare. It lacks depth, and in fact heavily relies on the mysticism of the Book of Revelation to lend a sheen of intellectual respectability. Essentially plot driven, with characters designed to help the story along, it belongs to a sub-genre of movies that, like religion, has waned in recent decades. Not as essential as Rosemary’s Baby, or visceral as The Exorcist, or just plain like The Omen, The Seventh Sign is a minor entrant in the canon.

The blu-ray transfer captures the washed out imagery original to the movie’s release back in 1988, which your reviewer vividly remembers seeing in the cinema. The visuals are clear, as is the audio track. What you won’t get on this release are any extras. There are none, not even the option of scene selection.