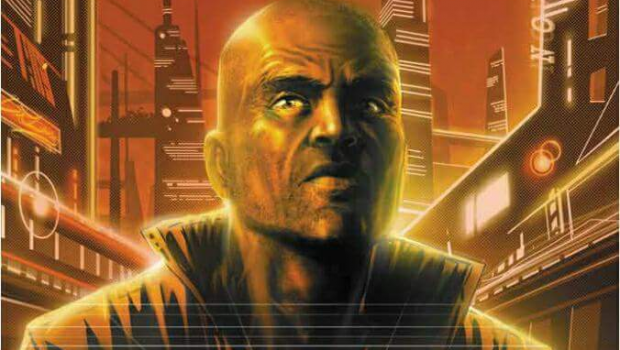 Summary: Sci-fi noir that explores Australia's dark history and the ethics of immortality. The story begins with a brief history of the colonisation of Australia in 1788 and the devastating impact that it has had on the Indigenous population, ranging from wars, disease and the Stolen Generations. We then jump forward to 2032, where colossal advancements in nanotechnology has resulted in a serum that can resurrect the dead, however, with the ethical implications widespread the serum is banned around the world. It is in this setting that we are introduced to the main protagonist, an Aboriginal-Australian named Cain Duluth who works at Nova Lucis which is a newly created United Nations city-state located off the coast of New York. His family remain in Sydney, where his wife works for an Australian nanotech corporation doing stem cell research. During a video conversation with his wife and daughter, Cain witnesses the beginning of a nanobot attack which decimates 90% of the Australian population, killing his entire family. We then see Cain on the eve of the five-year anniversary of the attack, working alongside his partner as they try to solve a perplexing murder investigation involving a familiar looking John Doe. The investigation quickly progresses into a dangerous nightmare, as Cain tries to unlock the mystery surrounding the murdered man and the connection he has to what is called, the resurrected. This is a rather complex story, exploring some interesting ideas and concepts that will linger with you long after you finish reading. At its core, it’s a post-apocalyptic, science fiction noir, that delves into some compelling themes that include loss, redemption and the ethics of resurrecting the dead. All of these themes come together to form a cohesive narrative that I personally found to be powerful to read. I applaud Christian for critically highlighting Australia’s dark colonial history, drawing attention to the rape, murder and genocide of Australia’s Aborigines. It’s an awful and bloody history, filled with massacres, frontier wars, stolen babies and countless other atrocities. It’s heavy stuff and no easy task to incorporate this into a science fiction setting.

The main portagonist, Cain, is an interesting character who pushes away from the offensive cultural stereotypes that many Indigenous Australian’s have unfortunately been labelled with. For a fleeting moment, we see him happy and carefree, however, that quickly changes after the abrupt loss of his family. He is grief-stricken and deeply traumatised from the nanobot attack which resulted in the death of his wife, daughter and 90% of the population of Australian’s. It is through Cain that we begin to form a connection to his past and the plight of Indigenous Australian’s, and I’m curious to see how this history will interact and shape things for Cain in the future

I also rather like the combination of the multiracial detective team investigating the case. We have Aboriginal-Australian, Cain Duluth, and his Japanese-American partner, Akimi Ozaki. They work for the Special Division for the Resurrected (SDR), whose mission is to permanently detain the resurrected dead, a.k.a. Rezzies. Their dynamic is excellent, with contrasting personalities that make for some interesting and funny banter between the two. She is a sassy smart aleck who is quick to tease Cain at any opportunity. He is dark, broody and very serious, and only really wants to focus on doing his job. I found the writing to feel effortless during their interactions, with it reminding me of many famous detective partnerships. The art by Crizam Zamora capture the tonal shifts of the story. There is a lot of intensity that we get to see reflected in the emotional turmoil that Cain is experiencing. He is a dark, broody kind of character, which is a direct result from his personal trauma and loss, and I found that this was reflected in his expressions really well. I also rather enjoy Zamora’s use of montages, which allow him to compress events occurring over time in a visually compelling way. I also found that these pages inject some diversity into the visual narrative with the use of overlaying images. However, I did find that there were some moments when the flow and movement of some of the characters appeared to be a little awkward and forced at times. The colouring helps to reinforce the tonal shifts in the story. There is also a wonderful sense of light that is achieved through the colouring, helping to bringing a level of depth and perspective to each page.

Overall, I found this to be an intriguing introduction to this series. The story is complex and lore-heavy, filled with heavy philosophical themes questioning ethics and morality. If you’re into reading science fiction with a dark historical twist, then go grab a copy ASAP!