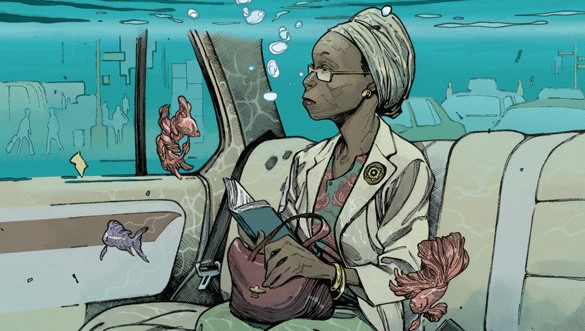 Summary: A powerful and dark force is targeting The Magic Order.

Bad things are happening to The Magic Order, with key members rapidly being picked off one by one by a dark and powerful wizard. With time is running out Leonard summons the remaining wizards for a meeting so that they may find a way to stop the evil forces before it’s too late.

OK, let’s recap. We begin this issue exploring Cordelia’s past, where we get to see how she escaped her abortion, thus coming into this world as an unexpected and somewhat unwanted surprise. An open book with a touch of derring-do, Cordelia continuously blunders her way through life, ever-threatening to expose her magical secret, whist also at risk being committed. A complex and misunderstood creature indeed. We then jump to the present where we see Regan being summoned by his father to attend a meeting of wizards at the family castle, which just so happens to be hidden inside of an oil painting. The summons is a response to the unfolding crisis; a meeting so that the remaining wizards can discuss and troubleshoot a solution without violating any rules of magical etiquette. During the meeting a breach occurs in the ominous sounding vault, where the order keeps highly guarded and dangerous objects, amulets and talismans. Certain magical paraphernalia has been stolen, and with the recent assassinations of key members of the order, this does not bode well.

Things just keep getting worse for the order, with members dropping off here, there and everywhere. We get a better glimpse at the mysterious assassin, a mysterious character called The Venetian. The build-up and drama surrounding this character is excellent and I just love the threatening sense of menace that Mark Millar creates. This guy IS scary and means serious business, and the creative and downright hideous ways of killing people he comes up with heightens the fear and trepidation surrounding him. Whilst the bad guys at this point are riding on a high, the good guys aren’t doing so well. Millar has placed his heroes in a pretty bleak and desperate situation, and I like how it feels as if they are unsure of the next step to take. Ain’t nothing like dark magic and the total threat of annihilation to spur the Earth’s magical protectors to take action, even if that action is in the form of a meeting…with rules…and etiquette. Gotta love a gentleman’s war, not so great if the other side doesn’t play by the rules.

I also like how we get to explore more of the troubled Cordelia. I am both sympathetic and frustrated with this character and find her to be another cleverly crafted creation of Millar’s. She is complex and unhinged, with most of her troubles stemming from her birth into this world and her complicated relationship with her parents. I can’t help but feel that Cordelia could either be one of these characters that grows and matures into something incredible, amazing and powerful, or go the other way and be the catalyst for their demise and ruin. Either way, she’s great and I’m keen to see how she’ll develop throughout the arc.

Olivier Coipel’s art is magic…excuse the pun. He weaves a highly compelling visual narrative that is both dark and beautiful. His fine, detailed linework really captures the facial nuances and emotional responses of each character. Coipel also draws ugly and scary things wonderfully, with hideous spells and dark magic showcasing his highly creative designs. I also need to take a moment to talk about The Venetian. I am in love. This guy is my kind of baddie, with a cape, a mask and a tricorne hat. HE HAS A TRICORNE HAT! This guy is a snappy dresser and I love him, nuff said. Dave Stewart’s colouring fosters the ominous tone driving this narrative forward, with a dark and muted palette. There are also some gorgeous pops of colour that really stand out in an eye-catching and lovely way.

Overall, I think this is a killer issue. There isn’t much more I have to say about this chapter other than I think it’s pretty great, but you probably gathered that already. Go on, do as I say and go get a copy!