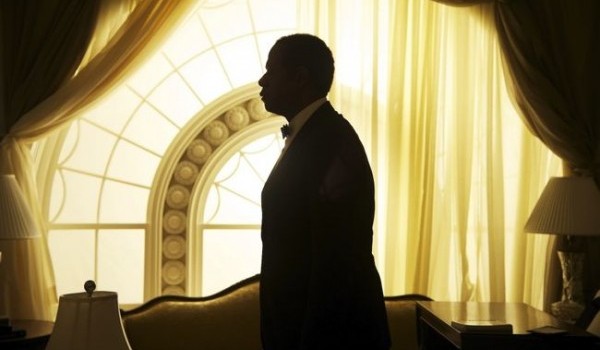 Lee Daniels’ film The Butler is inspired by the true story of Eugene Allen, an African American who from 1952 served as a butler in the White House for seven different presidents for thirty-four years. Despite sourcing Wil Haygood’s Washington Post article “A Butler Well Served by this Election”, this is very much an uneven, fictional account that recklessly uses Allen’s biographical details to ask about the separation between servant and slave, while filtering these characters through the various decades of racial tension and the Civil Rights Movement of America. How is it though that films are allowed to use and reshape the details of someone else’s life for their own stories and political questions?

Forest Whitaker stars in the film as Cecil Gaines, a fictional character mimicking Allen’s experiences, and has said that Cecil is viewed by his son in the film as an “Uncle Tom”. An Uncle Tom is a racial slur that refers to a black man who is obedient and submissive to his white masters. The term dates back to the 1850s, including Harriet Beecher Stowe’s anti-slavery novel “Uncle Tom’s Cabin” which was about a long-term suffering black slave. Due to some false truths in the biographical details and a simplistic political outlook, it’s difficult to read how The Butler stands on this term and how it views its passive and sometimes dull central character.

It’s an understatement to describe Danny Strong’s screenplay as taking liberties with the true story. Allen was born in Virginia, while the film has Cecil growing up in Georgia on a cotton farm. Eugene Allen’s parents were not raped and murdered, like Cecil’s are at the start of the film, and he grew up to father one child, not two as well. Cecil’s son Louis is played by David Oyelowo, whose character is interested in becoming a political activist. Between the juxtaposing narrative threads of Cecile serving in the White House and his son fighting for Civil Rights, the latter is the far more interesting and dramatically impacting. It details the development of the Black Panther Party from their passivity into a more aggressive stance. It is also entirely fabricated. Allen’s son was not a political activist, although he did fight in Vietnam, which is covered by the fictitious second son in the film. The two contrasting threads provide a moral question about the Uncle Tom syndrome, whether it is better to serve loyally in a steady, underpaying job or to continue fighting in the face of great adversity. The film’s answer is corny and belated. Although a character says that the help can be a subversive force, the film finds its dramatic resolution between a father and son when they’re willing to protest and be arrested together. Ending with the words “Yes we can” the film feels too late. Allen met Obama and consequently the film embraces an idealised view that Obama’s election is a great triumph over racial tensions. Reflecting on this nearly four years later and there is still immense racial hatred in America and other irresolvable political problems. The director Lee Daniels, whose film Precious I admired for its courage and grit, works well with his lead actors but makes some fatal narrative and casting choices. It’s clear that the son’s involvement with the Black Panther Party was invented because the main thread in the White House lacks straight up drama. Cecil is a nice, pleasant hardworking character played with a great amount of gentility and sincerity by Forest Whitaker, but it doesn’t make for tense or involved viewing. Consequently, the pacing of the film is sluggish. A lot of the domestic scenes feel slow and lack dramatic proficiency. This is despite a solid and appropriately unglamorous and worn performance by Oprah Winfrey, who smokes and drinks, waiting for her husband to finish his long shifts and is tempted by a family friend played by Terrence Howard. Less immersive are the Presidents, casting with distracting cameo appearances from Robin Williams as Eisenhower, John Cusack as Richard Nixon and Liev Schreiber as Lyndon Johnson, who has one of the film’s funniest scenes involving prune juice. Typifying the film’s dramatic inflation is Daniels’ choice to shoot the riot scenes in slow-motion and making the flames of the Ku Klux Klan look like hellfire. Evidentially, he didn’t trust the personal side of the story enough to speak for itself. With material like this, a challenge of history, it’s crucial for one to relive it first.

Summary: How is it that films are allowed to use and reshape the details of someone else's life for their own stories and political questions?