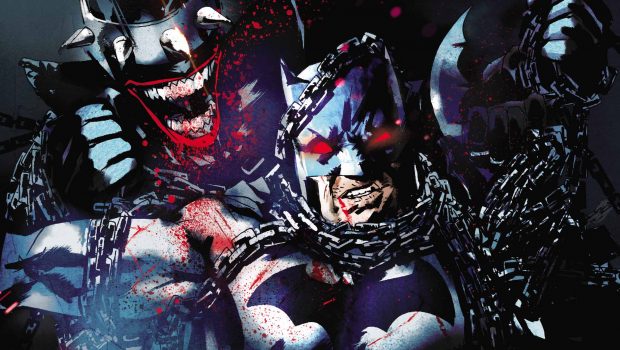 The Batman Who Laughs #3 Review

Summary: A fantastic issue with a shocking ending!

Scott Snyder and Jock return with the third installment featuring the battle of wits and souls between Batman and his Dark-Multiverse counterpart: The Batman Who Laughs.  This issue steps back a bit from the action, but sets the stage for the final three issues in a big way. This issue features two covers, a standard and a variant. Jock presents a very dark and macabre cover, both in terms of palette and content.  It features Batman wrapped in chains, with his eyes glowing red as he slowly succumbs to the Joker toxin that will transform him into a new version of The Batman Who Laughs.  Behind him and above him, The Batman Who Laughs is holding the chains and laughing, his eye piece and fear inducing smile the most visible and attention-grabbing parts of him showing.  The cover is great.  It represents the series brilliantly, and draws your eyes in right away.

Ricardo Federici presents the variant cover.  It features The Batman Who Laughs front and center, holding a scythe overhead.  He is surrounded by skulls, and behind him two skeletons are rising to their feet.  He is in full garb, all black leather and metal, one hand reaching out to the viewer.  To top it all off, he is surrounded by a green mist.  The effect caps off the eerie and horror theme of this variant.  It’s a well-done piece and a beautiful alternative to the standard for collectors. Jock handles the interior art in this issue with David Baron doing the colour work.  The character work in this series has been excellent.  Watching Batman as his body language and mannerisms slowly change has been a pleasure, and watching as Batman’s body language and positioning becomes more and more like The Batman Who Laughs adds a lot to the story.  The art in this issue focuses very much on driving the characterization of the cast of characters.  You won’t notice when in some panels the background details fade a bit.  The important pieces, the characters themselves, are drawn and coloured in a manner that keeps your eyes firmly on them. This issue begins right where issue #2 left off.  Commissioner Gordon is meeting with his son, whom we find is on drugs to curb his psychopathic urges.  His son is a serial killer, and some medications developed by Wayne Industries are the only thing keeping him from killing again.  Enter a desperate Batman.  Batman wants him to go off the drugs so he can use him to try and figure out the plan of The Batman Who Laughs.  James refuses, as he doesn’t want to go back to his old life.  This is the primary arc for Batman in this issue, and we can see the sane part of him struggling to remain in control, even as his body language gives away his ongoing struggle against the Joker toxin.

The Batman Who Laughs however is a smaller player in this issue.  He confronts the Penguin, who is harbouring an alternate universe version of Bruce Wayne while advising Penguin of a rat in his organization.  While he may be gathering an ally, it’s likely he just wanted to strike down another Bruce Wayne. This series continues to impress.  It’s well written and the art is fantastic.  This is most noticeable in Batman’s continued fight against the Joker toxin that is slowly turning him into another Batman Who Laughs.  The subtle hints in his body language and the increasing desperation in his actions and voice.  This is a Batman racing against the clock and in real danger of losing everything.

A fantastic issue with a shocking ending! 4.5 out of 5 stars. NATASHA ROMANOFF IS THE BLACK WIDOW NO MORE IN NEW COMIC SERIES! → 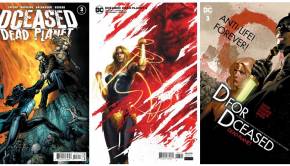