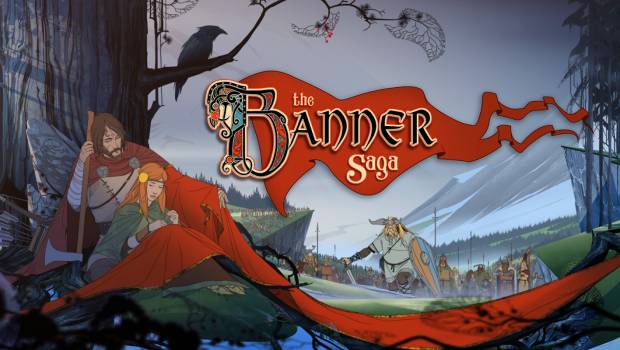 Summary: The Banner Saga is a highly worthwhile addition to any Switch library

Four years ago The Banner Saga, a highly successful Kickstarter project developed by ex Bioware staff was released to critical acclaim for its brutal yet addictive combat system and a mature story where your in game choices mattered. Now it’s been ported to Nintendo Switch and I’m pleased to say that all the factors that made the game so playable in 2014 are still present. The Banner Saga takes place in a world inspired by Norse mythology populated by varls (Giants) and humans. As the game begins we are introduced to the Dredge, a mechanical race thought to be extinct that are hell bent on wiping out all life. The game contains two intertwining stories of groups that are on the run from the Dredge and the decisions they make to ensure their survival. The story is mature and engaging, featuring a very well rounded cast that you feel responsible for. Almost all of the story plays out via text boxes, sometimes accompanied by the beautifully hand drawn character designs. Occasionally there is the little bit of voiceover narration, but this is scarce. People not used to interactive stories or games like Final Fantasy Tactics may at first not be used to the presentation and the need to pay constant attention to what is going on. There are no cut-scenes, and major characters can and will die in the little text boxes due to your decisions. Once you get used to the presentation players will find a rewarding story with a lot of weight behind it. Let’s talk about the choices. While not in combat your party is represented by a ‘caravan’ which contains your battle party and all civilians and other followers you accrue along the way. Movement is automatic in caravan segments, but you have to pay attention to your caravan’s morale and the amount of supplies they have left. If either of these sink too low, people will leave or even perish due to the harsh nature of the journey. The player can choose when to stop and rest as well, but resting too much drains resources that might better be used elsewhere. The caravan segments are often interrupted by a moment where you must decide what course of action to take. Sometimes your caravan members revolt due to the conditions, one early game choice involves a drunken nuisance among your caravan and how to punish him. Your choices will affect the morale of the caravan and also ‘renown’, which The Banner Saga uses as its currency for everything from supplies to experience points. Your choices for some events might seem minor, but there are many that have a huge impact on the game. The Banner Saga is not afraid to kill off characters and one story choice might make the difference between a well-rounded combat party or an under developed and outnumbered party. The choice mechanics keep you invested in the caravan sections and also give you an opportunity to get to know The Banner Saga’s large cast of characters. Fans of tactical RPG’s are in for a treat with The Banner Saga. Your party is placed on a grid and tasked with defeating enemies. Combat is turn based and characters can either attack, rest or perform special moves. An added wrinkle is ‘Willpower’ which can be used to boost attacks but also only has a finite amount. Another key feature of The Banner Saga’s combat is armour breaking, which is all but required after the first half an hour of play. Each unit has an armour rating and a strength rating. Depleting their strength rating will kill them, but the more you attack the armour, the greater chance you have of inflicting damage. The Banner Saga incorporates the armour breaking well, if you try not to do it your regular attacks have a percentage chance of being blocked outright, so you need to strategize about how to weaken the enemy before you taken them out. Fans of Fire Emblem and X-Com may be disappointed to see there is no permadeath in combat. Members in your party that are killed will be placed on an injured list for a certain number of days, which means you have to rest to bring them back to fighting health. This can lead to brutal situations where you are understaffed and crushed by Dredge, so party management is important.  Combat is very fun, and there are more hidden complexities contained within it as it goes along. The only complaints would be the lack of enemy variety and the lack of interesting landscapes, which were concerns addressed in The Banner Saga 2, also coming to the Switch this year. The Banner Saga still looks beautiful. The hand drawn animations make it look like a Disney cartoon from the 1950’s. From the landscape design to the combat animations, everything contains a meticulous level of detail that suggests they really squeezed every last drop of the Kickstarter proceeds into developing the game.

The Banner Saga is a highly worthwhile addition to any Switch library. It is incredibly well suited to the portability of the console. Combat is addictive, at times brutal (There are 3 difficulty levels for people struggling or masochists) but always highly playable. Couple this with a well told story with proper choices that can reward and punish you in equal measure and you have a game that is completely absorbing and hard to put down. I eagerly anticipate the following two volumes.