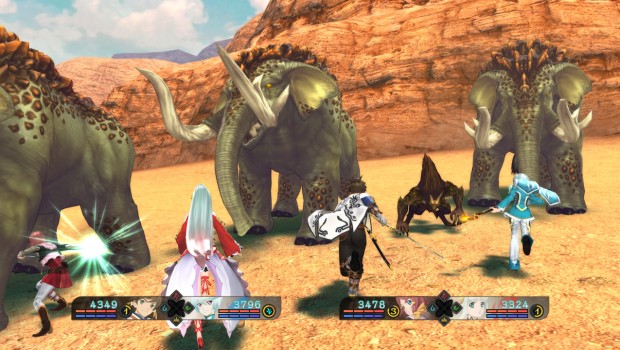 A not-quite-ordinary, sword-wielding human (raised by non-humans) embarks on a journey (to purify the world) with his silver-haired, magically-inclined, non-human childhood friend. This is a summary of the beginning of both Tales of Zestiria and its series sibling, Tales of Symphonia. That this kind of description can be written is problematic and symptomatic of the well-refined Tales formula beginning, perhaps, to stagnate. At some point, familiarity—or, perhaps more accurately, boredom—begins to creep in at the edges. I know what to expect from Tales games now to the point where even the actual clever subversions or innovations seem obvious. And this is the positives—when Tales of Zestiria misfires for me, it is much worse.

Some of the simple tweaks don’t work for me. Character ‘titles’ are bland and, worst of all, not unique—each character gets their own uninspired designations that hit the same cross-section of stat-enhancement, as opposed to previous games where titles were obtained through certain conditions and reflected the character’s personality of battle strengths. Basic attacks have become ‘artes’, which leads to the awkward position where the basic offensive ability is restricted by both combo limitations and Spirit Charge, the magic points substitute for Zestiria. Regular battles then transform from quick diversions and displays of still into confused, inefficient distractions. I am not ashamed, but disappointed, to admit that leaving all battles to full computer control is much more efficient (and in some ways also more enjoyable—I rode nearly 100km on my exercise bike while playing Zestiria).

I do like the new skills-on-equipment system, but it is incredibly complicated. Worried about choosing the wrong items—and with a lack of linear weapon progression—I was overly cautious with changing equipment. The first time I bought an improved piece of armour, I won the same item (with a slightly better set of attached skills) from my very next ordinary encounter, which further cemented the equipment system as slightly erratic and unpredictable. I still haven’t dared to try wrapping my head around item fusion in order to optimise my equipment, but there is, at the very least, a lot of variety and potential for those who are not dizzied by that kind of thing. The inter-party banter is one of the strong points—assuming you can stomach an abundance of puns. The fascination with puns is quite peculiar and on more than one occasion it’s clear that the translation team had to write a new joke to make up for the culture or language differences. Most conversations have one groan-worthy moment, but it’s arguably worth stomaching just for the really great puns. Unfortunately, jokes and puns don’t convey serious emotions very well so the ‘intense’ conversations can sometimes seem even more melodramatic or misaimed than they would otherwise be.

Lailah, the party’s lead seraphim (or spirit-character), is one of the most comedy-heavy characters. Prior to the in-game events, she took an oath in exchange for power which forbids her from discussing certain topics (or something along those lines—it’s hard to nail down aspects of a concept someone won’t talk about). So when the wrong subject matter comes up, Lailah acts like a fool and sings silly songs or makes jokes or talks about random objects and animals like an easily distracted 5-year-old. It’s weird but is both justified and consistent. But not all the characters are the same way. Take, for instance, tough guy with literal razor-sharp teeth, Dezel. He’s a rough guy with a soft spot for animals, who repeatedly tricks and confuses party members to spare all manner of critters—saving rabbits from being caught, cooked, and eaten is one example. But, when the party faces a minotaur, he regards it as little more than a hunk of beef. While there are probably hidden nuances at play, it seems contradictory that a man made uncomfortable by the concept of rabbits as food would be comfortable talking about a beast born from the tormented spirits of abused children as food.

There are other minor things that help to convey the general sense of lacklustre. Environments are large and open, but sparse; most locations feel more arduous than awe-inspiring. There’s also a weird contrast in styles between character models and environmental models: the characters still seem bright, colourful, and cartoony, while natural features seem muted and more ‘realistic’—the end result is that each looks like it belongs somewhere else. This is particularly prominent early on when the monsters are quite ordinary wolves and snakes, before the usual fantasy fare (orcs and angry suits of armour, etc) arrive. I must note, though, that the anime-styled cutscenes interspersed throughout are top-notch; sadly, these are too few and far between and also don’t blend with the weird ‘environmental realism’ focus. Monster mobs roam the landscape but, unlike previous titles, battles take place in the same location; a battlefield is set out in the location where the encounter was initiated. Getting rid of the repetitive, one-per-location battle screen is great but it also leads to the bizarre situation where touching one slime results in three more appearing, alongside two weird birds and one really angry boar, each of which was apparently hiding in an empty field or what-have-you. I am reminded of how Final Fantasy XII handled on-map monster mobs better, nearly a decade ago; I hope Tales games can implement their own spin soon, because it has potential.

Tales of Zestiria is not bad nor is it broken but it does not offer the wonder that I once found in JRPGs. Perhaps it is like a relationship grown too far apart; we no longer work together but neither knows how to end what has become comfortable, if rote. Maybe something will rekindle the spark, but it’s not Tales of Zestiria. It’s not you, it’s me. Sorry.