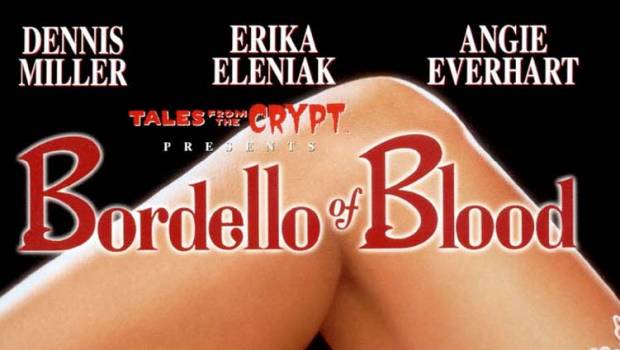 Tales From the Crypt: Bordello of Blood Blu-ray Review

Summary: Madam Lilith runs a bordello on the edge of town that people are dying to get into.

The 80’s and early 90’s were an interesting time in the entertainment industry… many movies were swinging for the fences… going all out and over the top. Realism wasn’t so much the focus as a kind of larger than life representation of the story. This was the era that brought us such classics as American Werewolf in London and The Nightmare On Elm Street series. But let’s back up a moment here… Tales from the Crypt was a TV series based on a comic series of the same name. The television series being based on a “premium cable” television channel was allowed to put more or less what they wanted in the show without concern about censorship and so graphic violence, nudity, profanity and sexual activity were all on the cards. The series did so well that movies followed and Bordello of Blood was the second of those movies.

Bordello of Blood features Angie Everhart as Madam Lilith, Erika Eleniak as Katherine Verdoux and as mentioned Dennis Miller playing private eye Rafe Guttman. Katherine’s brother has gone missing so she tried to enlist the help of the local police but they have so many missing people to investigate that her case will be more or less lost in the pile. Rafe overhears her story and offers to look into the disappearance, perhaps against her better judgment Katherine accepts his offer and the search begins. There’s nothing overly special about the story but that’s not really what you watch these films for… it’s the witty one liners (The Crypt keeper is famous for them… but Miller does his best to throw in a few good ones), the over the top gore and, certainly in this case, the excessive amounts of skin on display. This is schlock exploitation film making and it doesn’t hide away from that… the big difference is that at the time these sorts of films were “cool” and so you get plenty of actors appearing who likely would steer clear of the “low budget” schlock. In addition to the previously mentioned stars, we have Corey Feldman as Katherine’s brother, Chris Sarandon as Reverend Current, Aubrey Morris as McCutcheon along with some other familiar faces in cameo roles. Visually this is a respectable transfer… there’s nothing special about it, but it’s holding up pretty well for it’s age. There are the usual semi muted tones in some of the colours which is not uncommon for the time but the clarity is pretty good and certainly better than the VHS copy that some fans may still have sitting around in their collection somewhere. Unfortunately there are no extra features on the disc… it jumps straight into the film and that’s it.

I suspect this is mostly due to the fact that electronic press kits and the like didn’t really take off until the advent of DVD, the notion of filming behind the scenes material was far more rare. It’s a shame though because the animatronics of the Crypt Keeper hold up quite well and though some of the special effects and makeup are a bit obvious these days… seeing how they put them together would have made for some interesting supplemental material. If you are a fan of the over the top horror with giggles mixed in… this should be right up your alley. Not so much yelps of fright as groans of “eww gross”.