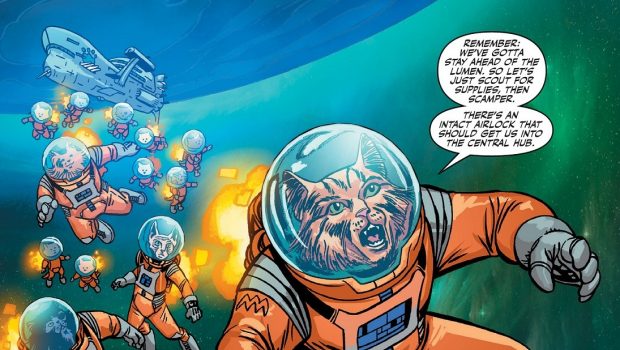 AHOY Comics is about to release their feline adventure tale set in space called Captain Ginger, written by Stuart Moore with art by June Brigman. I recently had a quick chat with Stuart Moore, where we got to talk about his kitty space opera, the inspiration behind the characters, his love of cats – heh- and much more!

Can you give us a little overview of the plot and introduce some of the key players for those who are unfamiliar with what Captain Ginger is about?

CAPTAIN GINGER is a space adventure with a twist: the entire crew is composed of cats. Captain Ginger, our hero, is the one who’s convinced the others that they need to operate with some sort of military-style discipline if they’re going to survive—now that the Feeders (their word for humans) have died out. It’s not an easy road. The rest of the cast ranges from Ramscoop, the cheerful engineer with too many kittens; to Sergeant Mittens, quick-tempered gunnery officer; and Ecru, a troubled, skittish cat who runs the ship’s Maker. We’re adding more all the time, too. It’s a colorful crew, quite literally. I absolutely love this concept and was hooked as soon as I read the description on the AHOY website. How did you come up with this idea?

Two words: June Brigman. We’d worked together before and I knew I wanted to do something with her, and I knew it had to involve cats.

I thought that the characters had an excellent and fluid dynamic with one another, and to me it felt reminiscent of a Star Trek episode. Was that intentional?

I’m definitely inspired by Trek—all the versions, probably, though I’m not much of a DS9 fan (sorry guys!). Although my other title at AHOY is “Ops,” so I guess that’s part of my life too. Were there any particular fictional or real personalities that inspired these characters?

There’s a pretty classic love triangle at the center of the story. Ecru was inspired by a difficult cat that my wife and I almost adopted once. We have a great big friendly ginger cat at home, but he’s more of an eater than a commander. Ginger himself is probably inspired more by the few times in my life when I’ve had a number of people reporting to me in a work situation. It’s not easy. June Brigman is the artist for this series, whom you’ve worked with before. I’m curious about what her reaction was when you pitched this idea of a feline space opera to her.

To my great relief, she said yes right away. I don’t know what I would have done otherwise. I’ve said this before, but it’s the first series I ever created with a single artist in mind. I can’t imagine doing it with anyone else. Finally, am I correct in guessing that you’re a cat person?

Can’t stand the bloody things. They jump up on the keyboard all the time, don’t they? How am I supposed to get any work done OH I DIDN’T MEAN IT COME HERE BEBE MM MM SKRITCH SKRITCH WHO’S A GOOD GIRL YES YES YOU ARE*