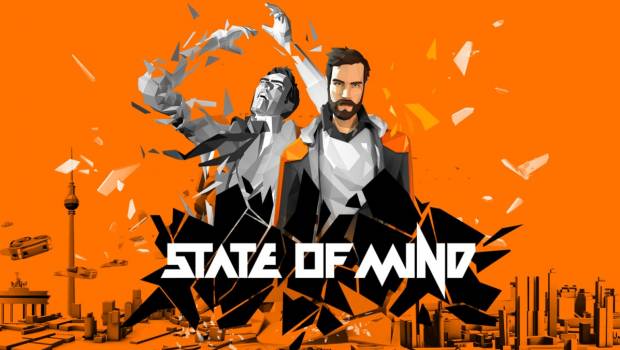 Summary: Cyber punk with a Money for nothing visual flair.

When the opportunity to review State of Mind came up I have to say the visuals are what really grabbed me. My first thought was that they are a cross between A Scanner Darkly and Dire Straits film clip for Money for Nothing with maybe a touch of Max Headroom thrown in for good measure. It’s that sense of attempting to show reality but not quite achieving it… the uncanny valley scenario. That visual style may just give a clue to one of the other main themes, that of A.I. and whether machines can become more than just simple programmable aides. The game starts with you waking up after an accident and being questioned by a doctor about what you recall, it’s a clever trick to enable some exposition that doesn’t seem unreasonable after all it’s important to know if you have acquired any brain damage from your crash… but if you think things will become clear after your little assessment, think again. For the moment, you are Richard Nolan and you start to learn that you are a journalist of some past success… but your world seems to be crumbling around you personally and possibly on a larger scale.

After a bit of exploring, you find yourself now playing Adam someone who seems to be doing far better and living in a nicer world. The stark contrast between Richard’s dark gritty world and fractured home life and Adam’s bright city and loving family life are just the tip of the iceberg and the deeper you trek into State of Mind the more you learn about their two worlds and how they relate to each other. The game play is predominantly point and click but there are a few “mini games” to break things up. Essentially it plays like a semi interactive movie, a little like a more advanced and more modern version of Space Ace or Dragon’s Lair. But exploration in a world that is so well realised can be quite a pleasure. Whether it’s strolling through Richard’s seemingly 24 hours darkness (no doubt helping to forge the comparisons with BladeRunner) or through the clean and sparkly world of Adam, there are points of interest and a general mood to take in and consider. Without giving too much away (and given this is a game about story development so I really can’t say too much)… the split down the middle is a theme echoed in many parts of the game… between Richard and Adam, between those wanting a more technologically infused future and those that don’t, those scenes of Richard’s dark city and Adam’s bright city are almost stating right there in your face… we are dealing with black and white… but there are shades in between and the player can take as much or as little away from this philosophical exploration as they want. The main issue I had with the game was to do with movement. It’s not a new issue with these types of games but it is a persistent pain. For anyone who has played these point and click exploration games you are probably familiar with the issue wherein you want to move around an object or walk from one spot to another, but your character seems to have these odd movement spheres that they have to move within… it breaks any sense of realism with the world when you character, ironically, shows themselves to be no more than a programmed character, unable to figure out how to move around an object… instead constantly walking into it until you nudge them a little to the left or right and they can find their path past again. But over all the negatives are outweighed by the well fleshed out worlds in which the characters live. It’s nice to have a break from the standard FPS or survival game or the usual tropes. Sure cyberpunk has been done before and will be again… but it’s not as common as some genres so any time a new titles comes out that has a decent amount of polish on it… I’m interested. While State of Mind does follow pretty directly in the footsteps of prior cyberpunk stories and themes… it’s not always what is being told but how it’s being told that makes the difference… and State of Mind can draw you in and make you want to know what’s going on. If in doubt, wait for it to be on special… but if you want a less hectic gaming experience with a cinematic feel… State of Mind could be just what you are after.