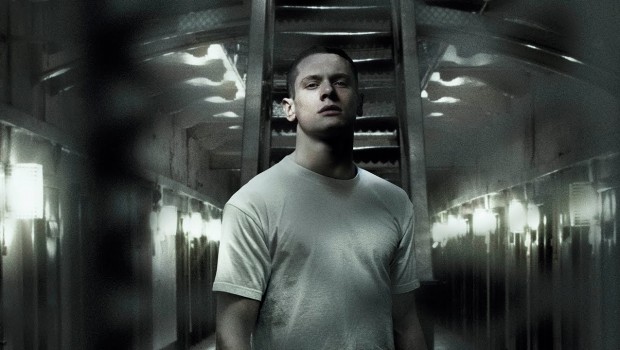 Summary: Starred up is an unflinching portrait of the tension filled hell that is a male prison

What does it mean to cage a man in a dank, forbidding edifice, surrounded by other men, most violent, all damaged?  Should we actually attempt to rehabilitate them, or are the criminals animals who should never again see the light of day?

Starred Up is a movie that leaves the viewer pondering those questions and more.  The transfer of Eric Love (Jack O’Connell) a juvenile offender who has ‘graduated’ to an adult prison quickly stirs up the settled routine.  Played with a rare intensity by O’Connell, Eric quickly demonstrates how profoundly damaged he is, engaging in an unprovoked brawl with the guards that is shocking in its brutality. At this point in the movie, the two other main characters appear.  Veteran Australian actor Ben Mendelsohn plays Nigel Love, Eric’s estranged father and an inmate enmeshed in the higher reaches of the prison hierarchy.  Not having seen his son since he was five, Love’s fathering skills revolve around the sort of tough love his son is ill-equipped to deal with.

Which is where prison counsellor Oliver Baumer (Rupert Friend) enters the movie.  An idealist working with a small group of inmates to help cope with their anger management issues, he attempts to break Eric out of the cycle of violence he finds himself trapped in.  Events quickly begin to spiral out of control, leaving the viewer to wonder who exactly will get out of the situation alive.

This movie is one of the finest your reviewer has seen this year.  The brooding menace of the prison itself, with its narrow corridors and narrower cells, lends the movie a claustrophobic feel that is not soon forgotten.  The byzantine, violent power structure in the prison population and the corruption amongst some of their guards is as dispiriting as the endless boredom of prison life.

Violence, or the threat of violence, is the common thread binding all the participants in the movie.  For the guards, the prison is like working on the summit of a volcano; the eruption will come, it’s just the timing that remains unknown.  And violence is the ultimate way the prisoners control and punish each other.  The violence in Starred Up is depicted unflinchingly – every punch, kick and slash is like a body blow to the viewer. What starts as a dehumanising depiction of men under extreme circumstances, evolves into a character study of the three main leads.  Are hardened criminals capable of change?  Where do loyalties truly lie in a world where trust is almost impossible?  Does your past determine your future?

And amidst all this violence and betrayal, the movie never abandons the idea of redemption.  For all his appalling parental skills, Nigel Love is a man who does love his wayward son.    Oliver shows that even in the bleakest of terrains, the urge to reach out and help your fellow man, no matter how alien their background, remains strong.

As for the Eric – abandoned as a child, prey to a paedophile, then sent to a juvenile facility – his story is the most profound in the movie.  Damaged and hurting, his instincts lean towards self-destruction.  He initially has no respect for his fellow inmates or the prison guards.  As the move progresses, however, and he comes under the influence of Oliver, Eric sees his life begin to turn around until by the end of the movie, the viewer is left with the impression that there is a chance for him to come to terms with his pain.

Tautly and pacily directed byDavid MacKenzie, from a script by former prison counsellor Jonathan Asser, Starred Up is a deep character study set in a hellish environment that confronts the viewer with the nature of violence and of masculinity itself.  Long after the credits have rolled, the viewer will still be thinking about this movie.  Always confronting, always thought provoking, it leaves you lamenting the dearth of character drama in today’s modern Western cinema. Film rating:  4.5/5  an unflinching portrait of the tension filled hell that is a male prison.  The weak are dominated by the strong, and corruption exists on either side of the bars.  And yet while sometimes a gruelling experience, the film does offer a shot of hope to the audience and its characters.  Fuelled by searing performances by the three leads, Starred Up is not only a great prison drama, but great drama as well.

Audio:  pitch perfect (though the predominance of regional UK accents can make the dialogue for those not familiar with the accents hard going).  4/5

Visuals:  crisp picture complemented by the choice colour palette adopted for filmmaking.  The warm yellow in Eric’s cell is offset by the often sickly, often stark, colour tones used through the rest of the prison.  5/5

Interviews:  the rise of DVDs and blu-rays has allowed the viewing public even greater access to the people essential to the production of the movie.  Sometimes, pulling back the curtain on the magic of film making can be a dispiriting process – in place of the wonder of film, you see everyday men and women explaining how the magic works.  Other times, as in the case of these set of interviews featuring actors and the production team, it helps enhance the viewing pleasure.

Director Ben MacKenzie speaks about the development of the script and his approach to filmmaking.  He speaks very generously of the actors he directed and gives a real insight into his process.  Writer Jonathan Asser gives a fascinating insight into the therapy work he conducted in prisons for over a decade which influenced the script he wrote and is essential to the tale of redemption that Starred Up is.

Actors Ben Mendelsohn, Jack O’Connell and Rupert Friend all speak with great insight into their characters, and the writer and director.  O’Connell in particular is humble and thoughtful about the people he worked with and the role he played.

Trailer:  the best trailers don’t give the movie away, or highlight the best scenes, but give you an indication of what the movie is about, and why you should watch it.  The trailer for Starred Up does just that, ratcheting up the tension and almost forcing you to come back to the cinema to watch the movie.

Madman Propaganda:  a selection of trailers for upcoming movies being released by Australian distributor Madman