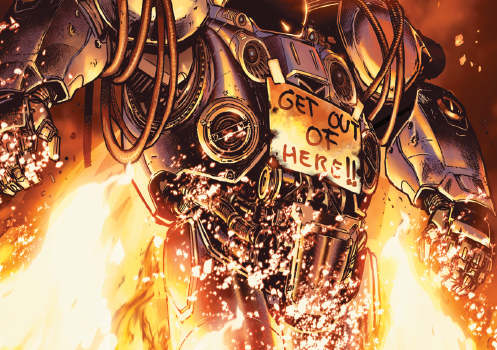 Summary: Tension between miners and marines builds in this Starcraft adventure.

Written by Andrew R Robinson and illustrated by Miguel Sepulveda, Starcraft Soldiers #2 continues the exploits of rookie Terran Lieutenant Shivani Singh. The story opens where the last issue left off. After attempting to arrest a lone miner for endangering the tenuous treaty between Dominion and Zerg, she and her squad are ambushed by a lurker and a pack of hydralisks. Singh freezes up, but the rest of her squad—more experienced veterans of Cavir—take charge and eliminate the threat. In the struggle, one member of her team is killed. Despite this fresh tragedy, Singh maintains her resolution and arrests the miner.

After she reports back to her superiors, Colonel Basch adamantly refuses to do anything about the miners. When she goes over his head, however, she’s issued the directive to move the miners off-world. Basch is pissed that she went above him, and so he dumps the full weight of the assignment on her. As expected, the miners aren’t pleased with the idea of leaving their home. Fresh tension begins to brew, and it’s obvious to Singh that these miners won’t leave without a fight.

It’s made clear early on that Shivani isn’t on Cavir to make friends. But so far her interactions with the miners—and also her fellow squad mates—makes her much less of a sympathetic character than I feel she should be. Not enough is revealed about her past to explain why she’s so gung ho about kicking these miners out of their homes and off the planet, and why she’s so willing to alienate herself from her fellow marines.

While Colonel Basch is a pretty stereotypical loudmouth superior, I almost felt more sympathy towards him when she went over his head and reported to her own mentor back home. I couldn’t really blame Basch for giving her the assignment that she basically brought down upon herself.

Even after Dr. Kazan shows her around and introduces her to the families of some of the miners, Singh’s reactions are cold. There is a hint that there’s something more to the story and a brief (but telling) one-panel glimpse into her past, but I’d like to see this much more fleshed out and developed. There must be some reason why she’s so adamant about sticking to the book, despite everything she’s already witnessed on Cavir.

Sergeant Tiller comes off as much more sympathetic. Though he follows the orders Singh gives him, there’s a reluctance to his attitude, and he responds as though he’s basically just humoring her for now. At the same time, he seems like he’s doing his best to maintain his own relationship with the miners. He’s hoping Singh will settle in, and this situation is just temporary.

It’s interesting to see the developing tension between the miners and the marines. The miners have been supplying the marines, helping to fortify their base, and now they’re being kicked out. In the Starcraft universe, this wouldn’t be the first time that Terrans have fought fellow Terrans, and it seems like this is where the series is headed.

From hydrolisks tearing into flesh, to the sun baked stretches of Cavir’s wastelands, to the pitted and battle damaged Terran marine armor, the art in this series embodies the Starcraft universe. Miguel Sepulveda does an amazing job of recreating the feel and aesthetic of the games I grew up on. Even little background details, like the row of barracks constructed side by side, each with the signature struts that signal they’re ready for take-off when necessary. The zerg are menacing in their own right—whether fully rendered, or just hinted at with shadowy outlines.

The cover art supports the brewing tension between the miners and the marines. It features a set of marine armor, crucified and set ablaze, along with the scrawled note “Get out of here!!”. Torch wielding hands can just barely be glimpsed at the bottom edge of the cover. It’s a fantastic first glance before delving into a story with brewing tension.

As the series continues, I want to know more about Shivani Singh, and why she is the way that she is. Right now she feels too unsympathetic to really care about what happens to her—I feel much more concern for the people around her, and what the trouble she’s stirring up will bring to them. Hopefully the next book in the series will flesh her out a little more.

Despite its problems, Starcraft Soldiers #2 is a fun adventure in the Starcraft universe. It triggered all sorts of feelings of nostalgia, and I enjoyed exploring the art on each page.