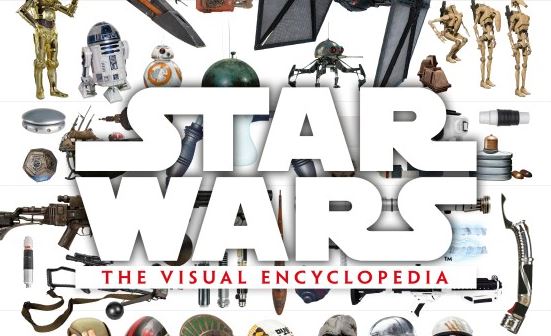 Summary: Star Wars The Visual Encyclopedia is a true bible of all things Star Wars!

Written by Tricia Barr, Adam Bray and Cole Horton, STAR WARS THE VISUAL ENCYCLOPEDIA is the definitive visual guide of this amazing sci-fi universe created by the legendary George Lucas. Boasting over 2,500 images from the Star Wars universe, this book touches upon the various elements showcased from this franchise that is split into five detailed categories that include Geography, Nature, History, Culture and finally, Science and Culture. So what exactly does this mean? This includes almost everything and anything from Star Wars such as the Lava Fields of Mustafar, the galactic politics of The First Order to Neva Kee’s customer podracer which may be quite obscure. It even has a section on the languages of the galaxy which include letters and even phrases that really makes this beautiful hardcover book of over 200 pages a very comprehensive tour of the Star Wars universe. Add in food, environmental health, weapons, starfighters and even pest control and everything from Star Wars is spectacularly showcased well with stunning images. Another highlight of this book is the foreword by Dennis Muren, Senior Creative Director of Industrial Light & Magic who notes that this book is a celebration to the story of Star Wars and how this series has had such a lasting impact on the world due to the amazing visuals and powerful characters. The paper stock is also high quality which almost makes the images stand out and the colours almost pop out of the page. My only drawback to this amazing book is that at times, you can become overwhelmed by the content as it’s almost a visual overload. However with the number of films and TV animated episodes, it’s easy to understand why and it also makes you wonder how on earth (or how on Tatooine), the writers brought all this content together. In terms of content, STAR WARS THE VISUAL ENCYCLOPEDIA focuses on all the films, including the animated series which add to the lore of this universe. For those wondering, this visual tour even includes images and information from the blockbuster Star Wars the Force Unleashed with a great summary of the new era which includes the leaders of hate (Captain Phasma & General Armitage Hux) plus the resistance fighters (Rey, Finn, Poe Dameron) and of course, General Leia Organa, R2-D2, C-3PO, Han Solo and Chewbacca. It even touches on Rogue Rogue: A Star Wars Story which is definitely a bonus. One interesting element of this book is the very detailed timeline that joins the prequels, original films, animated series plus the new films that starts from the Crisis on Naboo and ends with Rey tracking down Luke Skywalker and returning his lightsabre. Another highlight for me was the section detailing the Jedi and the Sith which showcases the key players and even discusses the path to the Dark Side. I really enjoyed the transformation of Darth Sidious from Senator Palpatine to Emperor Palpatine. All in all, this book is an amazing guide to the Star Wars universe that just draws you in and keeps you there. The STAR WARS THE VISUAL ENCYCLOPEDIA is pure Star Wars and the force is definitely strong in this publication from DK. Not only is it well written but it’s very informative that is matched with some glorious images from the Star Wars universe and is one book that not only makes for the perfect coffee table book but a guide that can be revisited on many occasions.