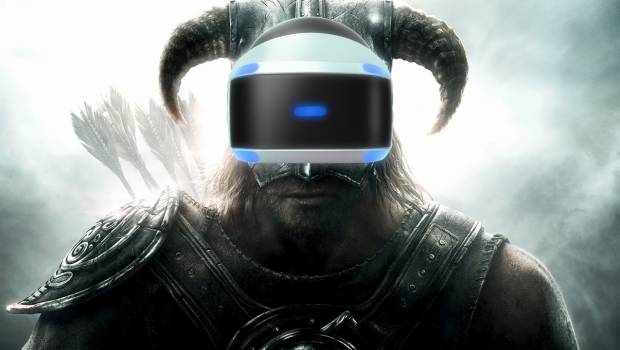 Summary: By far the largest PSVR title to date and packed with enough content to keep players coming back for months, experiencing Skyrim as an actual inhabitant of the world is an experience like no other and truly makes you feel like an epic adventurer, at least until you take a coffee table to the knee.

Six years to the month since it was initially released, Skyrim is back in the forefront of gamer’s minds again, with Bethesda’s one-two punch of porting the revered RPG to both the Switch and PSVR proving that there’s still an audience willing to experience the game in a fresh way despite the many, many re-releases over the last half decade.

The biggest difference between the two ports is that of immersion – Whilst playing Skyrim on the Switch gives you the benefit of portability, on the PSVR you’re afforded the chance to actually explore these familiar lands in an entirely new manner. Simply put, when playing on PSVR, you feel like you’re actually IN Skyrim for the very first time.

Now, I didn’t pour as many hours into Skyrim as most did, primarily due to having to juggle multiple titles at any given time, so after around twenty or so hours I became distracted and moved on to whatever else was vying for my attention; with that said, one of my fondest gaming memories of recent times involve questing with my homeboy Sven until we somehow became separated, arriving at Whiterun to be confronted with a letter informing me of his death (Which I tried fruitlessly to avoid by spamming previous saves to no avail) and then venturing back out into the bitter wilds alone in order to retrieve his corpse and place it upon a shrine behind my abode in Riverwood.

The story of Skyrim has been regurgitated more times than an Olsen twin’s lunch, so I’ll keep the synopsis brief: You’re the Dragonborn, you can use Dragon Shouts, you’re supposed to slay an evil Dragon God called Alduin but you’ll spend most of your time just faffing about and putting buckets on people’s heads.

All caught up now? Great. I mentioned my relative lack of time with the game above to kind of serve as a preface to this review, and if you’ve played and replayed hundreds upon hundreds of hours and discovered every secret tucked into every crevice of the base game and its DLC then your mileage may vary.

For me, however, going in for basically the first time and experiencing the scale and level of immersion that comes with playing in VR, playing Skyrim was an almost revelatory experience and shows naysayers that a fully open and explorable world packed with hours of content is actually viable in VR.

More importantly, Bethesda seem to have managed to overcome the major hurdle of implementing full locomotion whilst using the Move controllers, using a control scheme that, whilst admittedly finicky upon first booting up the game, soon feels almost as fluid as using analogue sticks. Although the option to use your Dualshock controller is there, personally I found actively acting out the movements greatly increased the sense of actually being present within this fantastical world.

By holding down the “MOVE” button and tilting your left controller in the desired direction you can easily traverse the environment, using Cross and Circle on the right Move controller to adjust your angle in incremental half-steps.

While this can break the immersion to a degree, it does help newer users who haven’t gained their VR legs acclimatise to free locomotion and regardless is looking to be patched to include the option for smooth turning at a later date. In fact, there’s a fair amount of different options for players to adjust to suit their comfort level, which is a relief after months of speculation that the game was only going to include teleportation movement mechanics.

If you want to teleport with FOV filters turned to max, you can, while conversely you can turn everything off entirely if your stomach is up to the task – How you play is entirely up to you and this is something that I feel should really be noted, as many early reviews of Skyrim VR gave off the impression that teleportation was still the only means of getting around. Using the Moves also opens up a whole new dimension in terms of combat, giving players the opportunity to simultaneously attack in two different directions; the intensity of the combat has been pared back somewhat in VR, with NPCs generally waiting their turn to attack, but there is still no more satisfying feeling than striking an enemy with your sword whilst casually blasting force lightning with your free hand at a grunt trying to unsuccessfully flank you.

Tracking isn’t quite as accurate as one would hope but this comes down a lot more to the limitations of the PSVR tech, namely the lack of a 360 camera set up. As with most PSVR games, if you block the light on your Move controller by turning around or whatever, the camera can no longer register it and your virtual limbs begin to spasmodically writhe across the screen.

Unlike most other PSVR games, however, which are often relatively stationary experiences, You’ll be turning about quite a bit in Skyrim, particularly during moments of intense combat, and inevitably you may find that the camera can no longer pick up your controller during the most inopportune of moments.

This can be mitigated somewhat by using the compass in game to orient yourself towards your camera, which is a nice design touch, and you’ll eventually learn to keep yourself in the right direction after a few hours of play, but it can be a bit bewildering when all of a sudden your shield appears ten feet away from where you’re frantically wailing on some bandits. Menu navigation can be a real pain at times with the Move controllers, but again eventually you learn to contend with the sensitivity issues when trying to select items or whatever. Where the tracking really needs to count is in regards to the combat and, in contrast to some other reviews I’ve read, I found the actions to be fairly 1:1 with my movements, which made for extremely satisfying battles against my opponents.

I did find using the bow to be incredibly difficult during my first few hours of exploring, but I discovered that this was more due to how I was miming the act of firing off an arrow – Rather than holding the right Move horizontally like you would an actual arrow, I realised that using both Moves perpendicular to each other greatly increased accuracy, as the game still registers them as your “hands” and not a bow and arrow respectively.

This may not work for everybody, but I found that sitting the camera around 6-7 foot high and angled slightly downwards while you stand about six feet away helps immensely with tracking accuracy, as it allows the camera to get a full view of your body even when stretching high above yourself, such as when trying to shoot down a dragon, or when you’re crouching on the ground. Okay, so this is where I’ve been hearing the most complaints; some people seem to think that VR technology is at a point where we can expect graphical fidelity on par with that of current generation consoles. Yes, Skyrim VR can appear a little blurry at first and, honestly, it can be quite the shock to the system, but give it five minutes and I guarantee that the downgraded graphics and faint blurriness won’t impact negatively upon your experience at all.

The key to VR is immersion and scale and despite the graphics basically being that of vanilla Skyrim, once you’re wandering about that massive world and discovering all that it has to offer, the sense of inhabiting Skyrim easily trumps the last gen textures and character models. Having played on both the OG PS4 and the Pro, I can confidently state that there is a definite increase in clarity when using the latter but, ultimately, I found both consoles perfectly capable of running the game.

In fact, the changes to both the map and the skill tree were far more impressive than their 2D counterparts, so some elements actually appear far more visually appealing in VR.

The sound is relatively solid, although the lack of true 3D audio and the presence of the channel crossover bug that appeared in previous versions of the game serve to knock its score down a few notches. Besides that, it’s the same Skyrim that most know and love – Bombastic and rousing soundtrack and some of the most stilted voice acting known to man all present and accounted for.

There seems to be a reluctance to embrace VR by most major gaming media outlets and even some developers, such as Ubisoft and EA who, after tentatively dipping their toes in the water, seem to have entirely given up on the format.

This genuinely puzzles me as, despite initial misgivings coloured by the lame attempts at virtual reality during the Nineties, upon actually using a VR headset I was well and truly on board the hype train, describing the experience to all that would listen as akin to those mind-blowing first moments playing Super Mario 64 and realising how irrevocably the transition into three dimensional gaming was going to change the industry going forward.

As a strong proponent for VR gaming, it’s heartening to see developers like Bethesda doubling down on the format and offering up experiences that, until now, have been declared as impossible to replicate in a virtual reality environment, with my anticipation for both Doom VFR and Fallout 4 VR rising exponentially after playing through Skyrim VR. Bethesda have creatively sidestepped many of the limitations of PSVR, particularly free locomotion without a DS4 or AIM controller, and with my camera set up as described earlier in the review, I seem to have avoided many of the tracking issues that have apparently hampered the experiences of some. While it’s true that the Move controls can feel a little clunky to begin with, I personally quickly became accustomed to them.

The simple fact that you can play Skyrim and all of its DLC in its entirety in VR is a massive technical achievement and hopefully it garners the reception it deserves so that Bethesda and other developers go back and rejig older titles for PSVR (Fallout: New Vegas come at me!!!) whilst expanding upon what’s currently possible with all-new AAA experiences like the aforementioned Doom VFR.

By far the largest PSVR title to date and packed with enough content to keep players coming back for months, experiencing Skyrim as an actual inhabitant of the world is an experience like no other and truly makes you feel like an epic adventurer, at least until you take a coffee table to the knee.