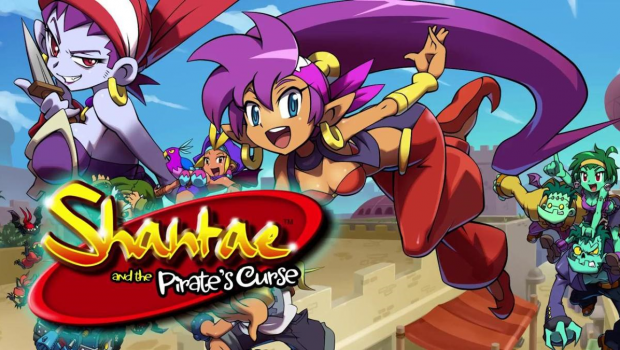 Summary: If you’re a fan of 2D retro platformers that test both your mental acuity and your thumb dexterity, then Shantae and the Pirate’s Curse should be right up your alley.

Shantae and the Pirate’s Curse is a 2D platformer that harkens back to the classic Metroidvania type titles of the SNES.

Originally released in 2014 for the 3DS and the Wii U, the game continues the adventures of the titular belly-dancing heroine as she struggles to adjust to a life without her Genie powers after the events of the previous game, Shantae’s Risky Revenge. Mechanically Pirate’s Curse is similar to the preceding titles, with the absence of magical powers alleviated by collecting pirate items such as a hat that allows Shantae to glide and special boots that grant the character a boost attack, so in essence the tightly honed gameplay that fans of the previous instalments loved so much remains relatively untouched, just contextually different in terms of the narrative.

Speaking of narrative, the plot itself is rather threadbare but the world is populated with such colourful characters and the dialogue exchanges are so well written that it really doesn’t matter if the main drive of your character’s quest is essentially the same as in the previous games; platforming games don’t necessarily need a convoluted plot anyway – After all, Mario’s been saving a princess from a spiky turtle tyrant for nigh on thirty years now. The basic premise is this: The Mayor of Scuttletown has sold the township for a bounty of chocolate to the nefarious Ammo Baron, who makes his first order of business a decree that Shantae’s luscious locks be cut off or she face imprisonment. Dejected, Shantae returns home where she runs into former nemesis Risky Boots, who accuses her of kidnapping her henchmen.

The two soon realise that there are dark forces at work and Risky’s former captain, the Pirate Master, is behind it all, forcing an uneasy alliance between the two and kickstarting Shantae’s latest island hopping adventure. That island hopping reference made above is actually quite literal; instead of the interconnected world of Risky’s Revenge, Shantae and the Pirate’s Curse arranges its levels across a series of self-contained islands, each one with a different environmental theme.

Whether this is a good or bad design decision rests on personal preference, but personally I preferred the more easily navigable island system, which relieves the often confusing, multi-layered treks back and forth between towns that hampered Risky’s Revenge. Shantae’s main attack is still her doing her best impression of Willow Smith, whipping all and sundry with her silken locks, but as you progress you accumulate a decent arsenal of additional weapons and items to assist in your quest.

The main draw behind the game for me is definitely the precision platforming and explorational aspects of the gameplay, using items to open new paths in earlier levels and solve puzzles and learning – and then exploiting – the movesets of your many, varied enemies. Shantae and the Pirate’s Curse retains the same charming retro inspired aesthetic of the previous entries in the series, although it’s clearly evident that the game was developed first and foremost with handhelds in mind. The pixelated sprites are slightly chunkier and compressed than what you’d see in similar titles created for larger screens, like the brilliant Shovel Knight but, personally, the brightly coloured graphics and endearing character and level design more than made up for this slight shortcoming. Add the crisp, static cartoon representations of characters used during the cutscenes to accurately convey emotion that would be impossible with the limited pixel palette and the graphical issues are completely mitigated.

Musically, Shantae and the Pirate’s Curse once again employs the prodigious talents of chiptune extraordinaire Jake Kaufman, the mind behind the music in games like the aforementioned Shovel Knight, so you just know that it’ll be pure quality. The minimal voice acting and environmental sounds are solid enough but it’s the infectious, nostalgia evoking soundtrack that really steals the show here. If you’re a fan of 2D retro platformers that test both your mental acuity and your thumb dexterity, then Shantae and the Pirate’s Curse should be right up your alley. The game is quite challenging at times but never reaches Shovel Knight or Mega Man levels of frustrating difficulty, so it’s a nice median between the ultra-hardcore platformers of the past and the more casual modern entries in the genre.

The cast of characters are charismatic, particularly the returning, fourth wall breaking Squid Baron, and Wayforward have done an impeccable job crafting the vibrant world of Shantae and her friends. With around 6-8 hours of gameplay and a whole host of upgrades to collect, plus a speedrun mode that unlocks upon completion of the main story, there’s a ton of stuff to keep even the most ardent platforming fanatic busy for a while.