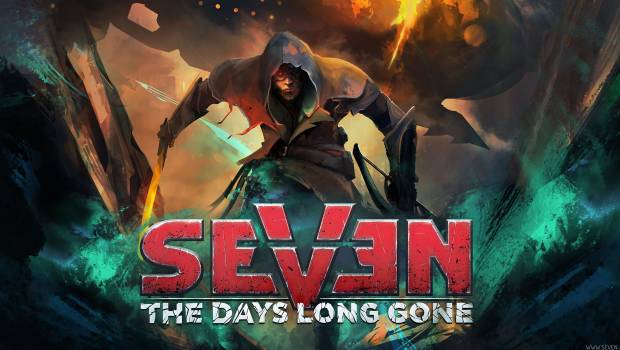 Summary: If you imagine Arcanum: Of Steamworks and Magick Obscura but transported to a futuristic setting by way of Assassin's Creed and you will have some idea of what this is all about. Isometric RPG fun with a touch of Parkour like motion and a twist of the occult.

Seven: The Days Long Gone is a game that is certainly the sum of all it’s parts. That probably sounds obvious but it’s a bit more relevant here. The first impression you get when looking at screenshots of the game suggest the classic Isometric games, Fallout, Baldur’s Gate and Arcanum: Of Steamworks and Magick Obscura… and it certainly does have that flavour to it… but you then need to add the “free roaming” of Assassin’s Creed, the stealthy light fingered gameplay of Thief, throw in a bit of Grand Theft Auto (for the sheer ability to wander where you want, within reason) and a few other elements as well. This is a risky prospect because all to often too many cooks spoil the broth but in this case… Fool’s Theory have more or less come out with a nice blend of all of that. The game starts with you talking one of your mates into helping you on a big score (being a thief by trade it’s just what you do). All seems to be going well, you find your target and then… then things really get interesting. It turns out the item you wanted to steal actually has as much interest in you as you have in it. Upon “completing” your little score you wake up on your way to a prison planet with a Daemon possessing you… not in the “you have no control over your body” type of possession but in the “I’m your internal dialogue, I’ll guide you but also criticize you” type. Turns out you have been “selected” to go under cover for the Emperor. Now when you or I think of prison we typically think of a very restricted space, small quarters for sleeping and limited mobility. This prison, Peh, is an island and I guess they figure no one is really going to leave so it’s more or less a city on the island and though movement is somewhat restricted via visas (you can buy visas or find other ways around), you still have pretty much free movement over the island. This free movement is also an important part of the game play because it means you can tackle objectives from a number of different angles. Some tasks will require you make your way into the center of a restricted building to locate an item… now you could try and go in guns blazing/swords swinging, magic flying… or you could try and sneak in through an open roof, you could even throw in a touch of Hitman by taking out an enemy, looting their clothes and then blending in with the other inhabitants. As with all games that attempt to bring as much as possible to the gamer, there are issues, it’s only natural that some things fall through the cracks. Sometimes the issues are going to be person to person based, what one person may find frustrating someone else may enjoy. Personally I found the view a little frustrating… it’s isometric but with a degree of flexibility, that is to say you can turn the camera around, zoom in and out… but you can’t quite bring it down as far as I felt I wanted to. Oftentimes I would be trying to see what was a bit further ahead and it felt like I should be able to bring the camera down to being more behind me looking forward… but it would stop me from getting to the level I wanted… as such it feels like you can’t see more than a some what limited distance ahead. I’m also a little curious about the loading times as they seemed excessively long, both for starting the game and for loading games (something you may well need to do often due to the challenges ahead). If you have it installed on an SSD I’m sure it will be much more bareable, but I have it installed on my main drive (OS is on SSD, games are on a traditional HDD) and other games load in fraction of the time, I don’t know whether it is an optimization issue (trying to load the entire world in one go?) but it seems a bit long. But there is a lot to like here. The world is full of interesting people and wildlife. Movement (though sometimes frustrating) allows you to traverse with speed and a good degree of freedom (scaling walls and cliffs is quite smooth when things are going well). There’s crafting and a Deus Ex enhancement program to make your character all you want them to be (or at least all you can make them), there’s a compelling enough story to keep you advancing to know what happens next and to uncover just what is going on. Really for the price it’s a good amount of game. The developers are tackling the bugs and recently released a patch to tackle many of them. It’s an impressive and at times awe inspiring achievement and well worth a look.