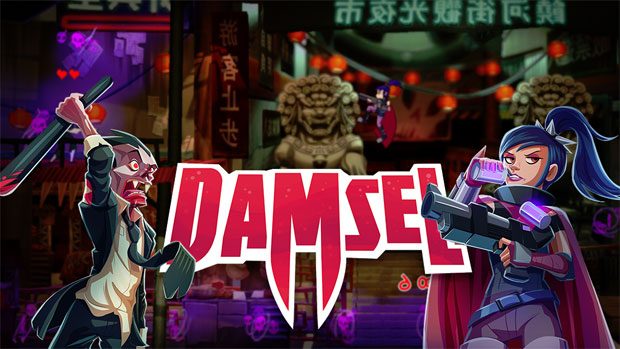 Impulse Gamer catches up with the delightful Megan Summers & Anthony Wood to talk about games, their new title Damsel and PAX Aus 2017!

Welcome to Impulse Gamer guys and can you tell our readers a little bit about yourselves and how you became involved in the gaming industry?

MS I’ve always loved playing games but being in my 30s it was never a job I never really knew existed. I came to the games industry by route of a theatre degree and a drama degree, both unfinished. While ‘taking some time off’ in 2006 I stumbled upon the Diploma of Mulitimedia (Game Development) and never looked back. In 2007 I started as a Junior QA tester at Pandemic OZ and moved to Krome then THQ Aus as the Australian industry began to shut down.

Anthony and I have been friends since back in the Theatre degree days and in 2011 we started Screwtape Studios. How did you come up with the name of Screwtape Studios?

MS Screwtape Studios comes from the novel the Screwtape Letter by C.S.Lewis. The book delves into the human condition in the form of letters between two demons.

MS It would have be the one and only time I finished the Well of Wishes (the Dope Fish level) in Commander Keen.

AW I was right in the middle of high school when Goldeneye came out. I think I spent the next couple of years worth of afternoons with mates playing the game. Even though I had to stare at a quarter of a relatively small TV for hours on end, it was a great time. Do you have a ‘go to’ game or favourite genre?

MS My current go to is Civilisation VI. I’m a certified Civ addict.

AW I always go back to Halo. There’s always been something very satisfying about the gameplay, It’s tight and well thought out. I like the simplicity of the enemy design and the complexity that comes from combining them in different situations. I get a similar vibe from the most recent Doom and Wolfenstein games as well.

Tell us about your new game Damsel which you’ll be showcasing at PAX Australia this year?

AW Damsel is an arcade platformer for PC and consoles. It features Damsel, an agent for the Department of Sanguinarian Affairs (DSA) whose job is to keep the worlds vampire population in order. It’s a fast paced, score attack style game that is set in a detailed cartoon world. It contains 75 missions across 15 environments, with each mission lasting on average a couple of minutes. It gets challenging pretty quickly, and attempting each mission multiple times is expected.

What inspired you to create this game?

AW There was no one thing that took us down this track. It’s us trying to do our spin on the classic PC platformers we played growing up and smashing that with some modern design sensibility. We were also interested in seeing if we could create a game with a traditional “core” feel, that is also accessible to a larger audience that may find fast paced arcade mechanics intimidating. Can you walk us through the gaming mechanics?

AW Damsel has a simple set of actions that remain the same for the entire game. She can shoot, jump, dash, and stake dive. The complexity comes from applying those mechanics differently, depending on the situation you find yourself in. This is tied to combo and bonus systems that encourage you to play fast, as well as pushing you to try tricks that push your score up. For example, rather than shooting enemies from the ground, you’ll get big points for trying to take out consecutive enemies in the air, essentially juggling yourself with a shotgun.

Each mission is designed to be played until mastered. Part of the fun of the game is trying to figure out the perfect path through a mission, doing the right tricks at the right times to maximise your score. It’s a vampire obstacle course.

We were interested in trying to capture a feeling of empowerment mechanically. It’s one thing to write a story that elicits some empathy for a main character, it’s much harder to create a set of mechanics that do the same thing. We want people to feel a certain way when they’re playing, the stress and release that comes from overcoming a challenge that seems insurmountable at first, but trivial when complete. (Putting on my pretentious cap) The game is a mechanical allegory, a “persistence simulator”, where, if you want to, you can take the general lessons learnt from playing and apply them to other aspects of your life.

Tell us a little about the main protagonist in the game?

AW Damsel is intentionally a mostly blank slate. She isn’t some super hero with a tragic backstory, she’s a normal person who worked hard to get to where she is. She is well trained and assisted by her friend and handler, Swan, as well as tech genius Die-Ode.

As the game is mostly gameplay driven, we want as many people to put themselves in her shoes and not feel too much dissonance. The idea is that we all face crap in our lives, and while our crap may not come in the form of stylishly dressed, corporate vampires, it is crap that can eventually be defeated by planning and persistence.

MS There is nothing more exhilarating that being on the show floor in the PAX Rising arena with all of the indie developers and fans mingling and playing. It’s a boost that gets us through the next year of development.