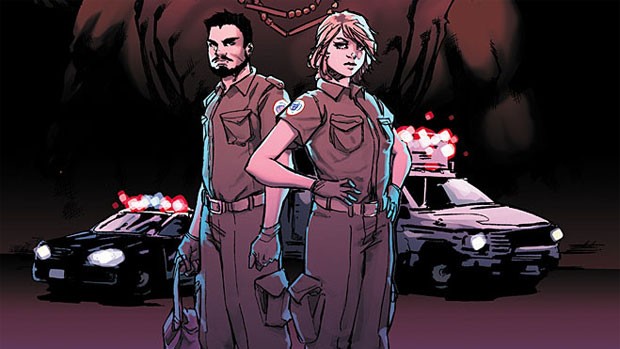 Summary: Santeria: The Goddess Kiss is a somewhat wordy tale about the dangers of mystical powers.

Santeria: The Goddess Kiss covers a lot of ground: religious traditions, police shootings, regret, ignorance, and faith. The narrative is even peppered, intentionally or not, with commentaries on racially and religiously fueled social mores. Above all, however, the comic is about the costly power of the goddess Oonaa. As a goddess, Oonaa used to survive on the songs and dances of her worshipers, but time and cultural changes have shifted Oonaa’s focus from adulation to blood sacrifice. The narrative opens with a third-person account of the life of a dedicated priestess of Oonaa named Aamali—a tale that is both harrowing and excessively detailed—and that story is followed by an in medias res introduction to EMTs Mike Ortiz and Naomi Clarke in modern-day Spanish Harlem. Like a somewhat tunnel-visioned version of Neil Gaiman’s American Gods, David Wohl’s Santeria: The Goddess Kiss attempts to capture the indignation of ancient gods. Oonaa is a proud god, and this comic catalogues her quarrels with an equally prideful 21st century. The comic portrays power as a jealous, two-faced force, an energy that is helpful until it is insulted—then it bares its teeth. Author David Wohl sprinkles the comic with references to the binary nature of power: Oonaa’s power, like all power, is both deadly and life-giving. Though Oonaa’s story guides the narrative, the comic centers on humanity’s reaction to her power. Some characters pursue Oonaa’s gifts with violence and religious fervor, and other characters resist her power, seeing it as a corruptive, demonic force. All characters, though, approach her power with a sense of awe, like tourists standing at the base of Mount Everest. Hints of Romanticism run through the characters’ collective, reverent response to Oonaa’s power. Oonaa, who is both a victim and a predator, represents both parts of the yin and yang of nature as perceived by Romantics like William Blake, a poet who wrote “The Lamb” and “The Tyger” as a means of portraying the duality of nature and religion. Romantics believed that nature and religion could be innocent like a lamb and dangerous like a tiger. Oonaa’s power embodies this duality. In Santeria: The Goddess Kiss, power does not corrupt—it taunts.

David Wohl’s narrative moves like a colorful old car, sputtering its way from one scene to the next. At times, the narrative flows well, filled with poetic phrases and well-placed details. Other times, the writing seems congested. Some pages are a stop-and-go clutter of wordy panels with unnecessary exposition. The comic’s use of third-person narration is tiring, and it overshadows any narrative subtlety. Instead of allowing Giuseppe Cafaro’s artwork to share the burden of storytelling, Wohl’s text dominates a number of panels, aggressively pushing plot and character development at the reader. Guiseppe Cafaro’s artwork complements the complexity of the comic’s narrative, and Wes Hartman’s colors are masterful. Many panels feature pastel versions of conflicting colors—dull blues and hazy reds—which capture the mystical nature of the story, as if Oonaa’s power flows throughout the pages of the comic like a fog.

Santeria: The Goddess Kiss is an ambitious comic, and I appreciate the attempt to pack one comic with a variety of locations, characters, and moral questions. Though the first issue was weighed down by exposition, it presented some exciting themes, and maybe the next few issues will offer fewer words and more characterization. If so, I look forward to reading them.