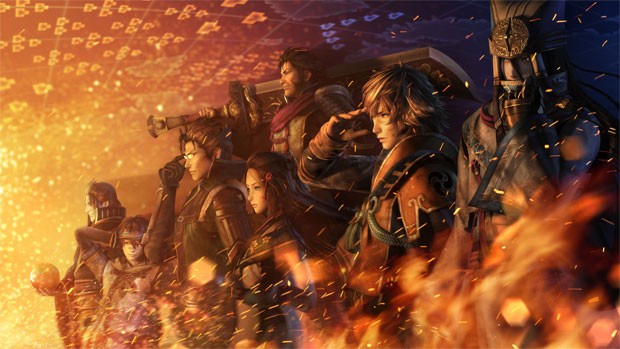 Now, unless you’re familiar with the Samurai and Dynasty Warriors franchise, you may struggle to understand what the Empires edition is all about. Quite simply, Samurai Warriors 4: Empires primarily focuses on you joining a faction while implementing different kinds of policies, strategies, and tactics prior to battle as you look to take control of all territories on the map. Indeed, Empires has little story in comparison to its predecessors; it’s all about building your faction as you fight to gain control of the land. Much like the entire Samurai and Dynasty Warriors franchise, those of a tactical and strategic persuasion will love the Empires edition whereas those looking for in-depth storytelling will prefer the original titles. Simply put, if you are a Warriors fan, what you are getting with this edition is pretty much the same as previous Empires installments.

Samurai Warrior 4: Empire’s main game mode is Conquest, which consists of selecting a clan to unite lands, regions, or ruthlessly seize capitals. You can create your own custom clans, consisting of over 200 generic officers (including female) and create your own custom character to take into battle using the extensive creator tool. If you’re feeling extra creative, you can play the Genesis Mode which gives you freedom to create lands and place officers across the map essentially allowing you to create your own version of the game.

If you have saved data from Warriors 4 or 4-II, you can transfer over your previously edited characters, but progress and growth are non-transferable. Interestingly, you can now marry fellow clan members provided you max out your friendship meter with your desired partner. After you have selected your character and clan, you need to appoint strategists and magistrates whom you can heed advice from by selecting certain policies they recommend. These policies give you the option to increase your clan’s fame, unlock new types of attack and defense strategies, improve troop strength, increase commerce, and upgrade your castle’s facilities. In general, it’s up to you whether you listen to the suggestions of your subordinate officers, or issue your own commands, but choose wisely, as every decision you make potentially affects their loyalty to you.

Once you are ready for battle, you can select which troops you want to take into battle with you and select their positioning on the battlefield. If you win the battle, you then take control of the specific territory conquered, leading to the option of employing, releasing or executing the defeated clans chief warriors.

Though pre-battle provides you with a plethora of tactics and strategies to implement, the combat itself is repetitive and excruciatingly boring. You’ll find yourself repeatedly mashing the same buttons over and over again as there’s no real system to learn, so if you’re looking for something that will test your skills on the battlefield, you’re not going to find it here. Additionally, your AI companions are completely useless while the enemy AI doesn’t fair much better.

It’s a shame the combat is so poor, as the level of detail and features included in pre-battle, where you weigh up what personnel and options to apply to your team before taking to battle is excellent. It’s obvious a lot of thought and care has been put into that aspect and while you could argue that’s what an Empires title is all about, as a minimum requirement, the combat system should still, at least, be competent.

Much like previous Samurai Warrior entries and unchanged from Samurai Warriors 4 and 4-II, the visual presentation of each individual character looks good, but the battlefields, arenas, and environments look terribly dated. As a result, Samurai Warrior 4: Empires looks like it belongs on the last gen, and that’s being generous.

Furthermore, the camera work is awful; with the screen not keeping up with your character hindering your field of view. That said, it’s probably not going to make much difference to your chances of success in battle, just keep hitting the attack buttons over and over and you’ll be fine.

However, on the plus side and keeping with previous Warrior titles, the audio is competent and you can also change what music is playing during battle, so if you get sick of the same tunes you can mix it up with a decent amount of tracks to choose from.

Lastly, the dialogue itself is in Japanese with English subtitles which is a much better choice than choosing to redub the entire game. If you own Samurai Warriors 4 or preferably 4-II, then I wouldn’t bother with this one unless you are a huge fan of the franchise and its Empires editions. Personally, I can’t see anything here that’ll keep me coming back for more. Aside from a few new options such as the marriage system, Omega Force, and Tecmo Koei haven’t really implemented anything new or original when comparing this edition to previous installments. Overall, it’s the same game it always has been. While that may be a blessing for its fans, those new to the Samurai Warriors franchise may feel a little underwhelmed by the what it has to offer.

As mentioned previously, there’s a ton of options pre-battle that the strategist in you should enjoy, but when it comes to the combat – Samurai Warriors 4: Empires fails to get the heart pumping.