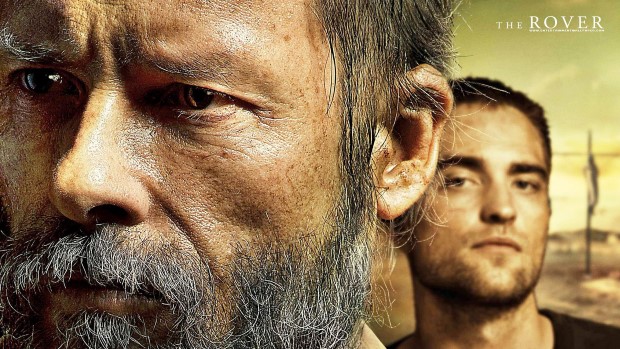 Summary: The Rover is a hauntingly beautiful film that more than holds up to Michod’s brilliant debut.

David Michod’s sophomore effort after the critically acclaimed Animal Kingdom is an unrelentingly bleak look at Australia post-economic collapse that will stay with you long after the credits role. Starring Guy Pearce as bedraggled loner Eric, The Rover focuses on his quest tracking a trio of thieves who commandeered his vehicle after a robbery gone wrong. Travelling across the sunburnt landscape of the Australian outback, Eric soon stumbles across Rey (Robert Pattinson, in a role that shirks his Twilight typecasting), the mentally deficient brother of one of the thieves.

Left for dead after the shootout, the heavily injured Rey is rescued by Eric for the sole purpose of helping him locate the bandits and together the duo face down the horrors of a world trapped in a downward descent. The plot of The Rover is rather simplistic but it’s the journey that defines this film rather than the destination, and what a journey it is.

The collapse of society has left the Australian outback a lawless land full of opportunistic criminals, a jaded military presence and an influx of people from all corners of the globe seeking their fortune in the still relatively stable mining industry; throughout their journey across a parched landscape punctuated with lynched corpses, Eric and Rey come across opium den matrons who offer up their young male wards for a price, weapon trafficking Midgets, a doctor with a penchant for rescuing abandoned dogs and seek sanctuary, no matter how brief, wherever they can. Eric initially treats Rey with disdain, viewing him as a tool to be used and nothing more, but slowly their acrimonious relationship begins to soften somewhat as Rey shows a resourcefulness that belies initial impressions, such as the ability to converse in Chinese and a surprising sense of loyalty towards his captor.

It’s this relationship that forms the crux of the film and both Pearce and Pattinson imbue their roles with a genuine quality that wrings every drop of emotion from Michod and co-writer Joel Edgerton’s story.

The cinematography evokes the classic westerns of the fifties and each shot is strikingly beautiful in its composition; the barren landscape perfectly complements the barebones story and the enigmatic characters that populate it and Michod displays a deft directorial hand that proves that Animal Kingdom was only the beginning of what is sure to be an illustrious career. The Rover comes with an accomplished transfer that captures the austere visual quality of the Australian desert perfectly. Fine detail and textural qualities are outstanding and the dry colour palette of the environment is impeccably realised. There’s no instances of crushing in the darker scenes and the film print is clear and free of any graphical issues.

Audio is presented via a DTS-HD Master Audio 5.1 track that effectively evokes the mood with its ambient score and sparse dialogue. Directionality is well accomplished and there’s no evidence of audible bleed through at all.

Overall The Rover boasts a consummate transfer that serves to complement the strikingly beautiful cinematography and subtle immersion provided by the wonderfully executed audio track. The Rover comes with a small selection of supplemental features, including a lengthy making-of documentary that’s split across three sections: The first, New World Alignment focuses on the inception of the story, production design and the casting process, A Multitude of Extremes, which focuses on the beneficial aspects of collaborative filmmaking and Lawless Land, which covers the experience of shooting in Australia.Informative and incisive, this is a great accompaniment to the feature.

Also included is a commentary with David Michod, which offers more insight into his intentions behind the film, although it inevitably has some overlap with the making-of, and a Q&A with Michod, Pearce, Pattinson and producer Liz Watts moderated by Australian reviewing treasure Margaret Pomeranz. The almost glacial pace of the story may not be for everyone (Indeed, public opinion has been quite divided, with some praising The Rover as one of the best films of the year and others denouncing its inertness) but for me The Rover is a wonderful exploration of the horrifying reality that awaits us all if there ever really was an economic collapse and is a hauntingly beautiful film that more than holds up to Michod’s brilliant debut.

There is an almost lyrical quality to the film and the duo’s compelling journey through what remains of society makes for enthralling viewing, even if one can’t shake the feeling that things aren’t going to end well for our protagonists.

Robert Pattinson finally shows a range beyond simply brooding sexily and Guy Pearce is excellent as the obsessively fixated Eric, a tortured soul with more than a few of his own skeletons in the closet.

If you’re a fan of thoughtful, measured films like The Road then The Rover will certainly rank amongst your favourite releases of the year.