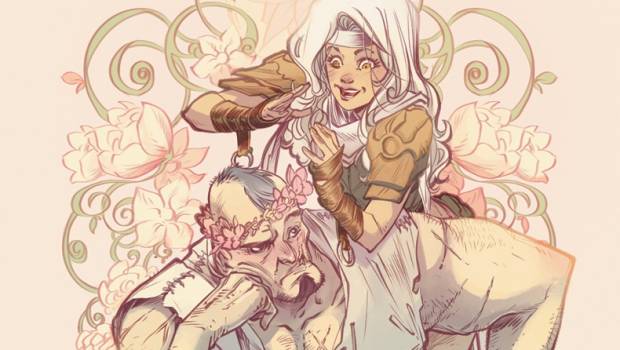 Ila is imprisoned in Drucilla’s dungeon, still clinging to hope that the rebellion may still prevail against the evil forces threatening to tear Ttereve apart. Meanwhile, a ghost from Rose’s past leads her to a mysterious forest where a group of tribal priests are awaiting her arrival. This issue begins with Rose following her old friend, Ban, a white bird that appears like a ghost from her past, guiding her to a mysterious new forest. As Rose approaches the bird and reaches out to touch it, she is suddenly surrounded by a tribe of people, who call themselves, the Priests of Tera. They welcome Rose to their forest, requesting that she follows them to their temple as they wish her to partake in something called the ritual of illumination. Naturally cautious, Dante warns Rose not to follow them, urging her to be wary of their motivations and this so-called ritual. Rose, however, throws caution to the wind, deciding to trust them, she she believes they may be able to help remove Thorne’s magic inhibiting collar. Meanwhile, back at Drucilla’s dungeon, we see Illa talking to the shackled Prince Felix, trying to convince him that there is still hope in defeating Drucilla. She believes that the people need him more than ever, as he is imperative to the success of their rebellion. Her words fall on deaf ears, as Felix is a man defeated and crushed from years of torture and imprisonment by his evil sister. Felix tries to explain to Ila that Drucilla wasn’t always so evil and cruel, instead blaming her vile transformation on himself and their father. We then delve into Drucilla’s past, exploring the grief and loss that she experienced as a young child, and how this shaped her into the cold, selfish and embittered person we see today. This is quite an interesting and revealing issue of Rose, focusing more on Drucilla’s past as a small child and how the loss of her mother deeply and irreversibly changed her. I’ve always been incredibly intrigued by Drucilla, wishing to know more about her and her motivations, so finally seeing these short snippets of her past allows us to understand why she is the way she is and how this transformation in her occurred. Drucilla blames the death of her mother on her father, who used her like a brood mare, forcing her to carry child after child in a short amount of time. Eventually, this physically weakens her and we see her pass away, rather tragically after delivering a stillborn baby.  It’s a tragic story, and whilst I felt for Drucilla as a young girl, I found it hard to justify the cruel treatment of her father, who spends the rest of his life trying to win back his daughters affection, only to be heartlessly rejected. I’m also growing a little suspicious of Drucilla’s nanny, as she seems to be a somewhat ominous and influencing presence in Drucilla’s past. She was present at two seminal moments in Drucilla’s life that took a dark and dramatic turn, so I can’t help but think that perhaps she helped to influence the outcome of things in some way. Just theories, so who knows? I could be wrong. Ig Guara’s art is once again beautiful and expressive. You really get a sense of the emotional turmoil that these characters are experiencing. In particular, I found Felix’s sorrowful face to be heartbreaking, reflecting a broken and defeated man who has given up on life. It was also great to see a new tribe of people enter the picture, visually bringing a new dynamic to the story. They looked like tribal forest druids, decked out in flowing robes with tattoos, ornamental jewellery and adornments. The colouring is wonderfully atmospheric, reflecting the overall ambience and tonal shifts of the narrative. I particularly like how Triona Farrell captures light, which creates a lovely shimmering and iridescent effect. The shackles in the dungeon almost appear to glow, as light reflects off their metal surface, giving these dark and gloomy scenes an almost pretty quality in this small detail. Overall, I’m really enjoying the direction the story is taking, finding that things are gaining more depth as the narrative progresses. I’m also curious to see how this ritual will unfold for Rose, and how this will alter her future with Thorne.