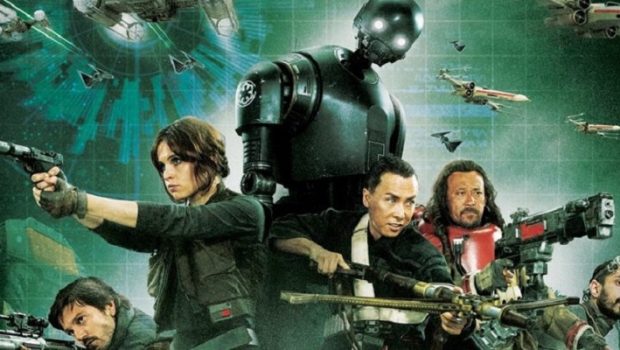 Summary: Rogue One: A Star Wars Story is a must have Blu-ray for all fans of this franchise which successfully pays homage to the original 1977 film but also modernises it.

Although a standalone film, Rogue One: A Star Wars Story successfully expands the mythology of this amazing sci-fi series and is based on a key sentence from the introduction of Star Wars Episode IV: A New Hope… Rebel spies managed to steal secret plans to the Empire’s ultimate weapon, the Death Star. It also uses some clever CGI tricks to link this 2016 film to the original 1977 film which started it all, not to mention some truly powerful fanboy and fangirl scenes. The film is also directed by Gareth Edwards who definitely brings his A-game to this franchise, not to mention some spectacular out of this world special effects and action scenes. The story of Rogue One revolves around Jyn Erso (Felicity Jones) whose mother was killed by the Imperials when her father was forcibly taken to create the Death Star as a young girl. This attack on Jyn’s family was led by the nefarious Director Orson Krennic (Ben Mendelsohn) who makes for the perfect villain. Fast forward to adulthood and Jyn has successfully managed to survive the ravages of both the Imperials and the gangs and is quite ‘street smart’. However when the Rebels discover that the Imperials are creating one of their most powerful weapons which will change the balance in the galaxy, they recruit Jyn to their cause. She actually has no choice.

Her mission is to join Cassian Andor (Diego Luna), a Rebel spy and his droid K-2SO (Alan Tudyk) to find an Imperial defector pilot known as Bodhi Rook (Riz Ahmed) who can hopefully lead them to retrieving the plans to this super weapon. Unfortunately Bodhi has been captured by rebel extremist Saw Gerrera (Forest Whitaker) which also raises mixed emotions for our heroine Jyn due to his ties with her father. So with the pilot ‘safely’ in their hands, Jyn and Cassian find some other allies to their cause on the planet of Jedha before flying into an Imperial strong hold to steal the plans of the Death Star. Overall, the plot development and characters works well in Rogue One as do the amazing action scenes which is what you expect of a Star Wars film. Visually this is probably one of the most impressive Star Wars movies to date and I really enjoyed the homage to all the various vehicles and weapons from this franchise. With that said, Rogue One definitely has parallels to those classic Hollywood films like The Dirty Dozen or Force 10 from Navarone due to the impossibility of their mission, however it’s firmly set in the Star Wars universe. One issue with the story is the pacing and explanations which at times seems a little muddled. Some scenes needed additional story telling, whereas others did drag on a little. The characters for the most part are enjoyable and Felicity Jones carries herself well as Jyn Erso and although the story is quite dark, the humour of this film centres on Alan Tudyk who has some great one-liners as the reprogrammed killer droid K-2SO.

Then you have Donnie Yen as this blind warrior called Chirrut Imwe who worships the Force and is accompanied by his friend Baze Malbus (Wen Jiang) and these two actors just seem to bounce off each other. I also felt that the excellent Mads Mikkelsen as Jyn’s father Galen Erso was a little underused in the story but his limited inclusion did help piece together a few of the mysteries. Furthermore, Mendelsohn works well as this power-hungry Imperial officer and he seemed to channel his inner darkness. There’s also some interesting cameos such as Genevieve O’Reilly as Mon Mothma and Jimmy Smits as Bail Organa which is a nice nod to the previous films.

To further link this story to the original film, we also have a CGI Governor Tarkin (Guy Henry) which at times can be off putting because although it looks real at times, it also destroys the illusion. Other cameos include Darth Vader (voiced by James Earl Jones) and C-3PO (Anthony Daniels) with another interesting CGI at the end of the film that I won’t spoil for those who have not seem the film… if such a thing is possible. However I will make mention that the Darth Vader scene at the end of the film is priceless and almost worth the admission price alone.

Given these fan moments in the film, I did have mixed reactions and I although I enjoyed them, I felt that the director incorporated a little too many into the story, including the use of CGI humans. Nonetheless, Rogue One successfully captures the spirit of Star Wars, especially that of A New Hope and re-watching this on Blu-ray gave me a different take on the film opposed to just at the cinemas where you can become a little overwhelmed by the special effects. All in all, a great addition to the franchise! On Blu-ray, Rogue one: A Star Wars Story is a work of art and the video quality is exceptional as is the audio. It’s pure reference material and everything just works so well. Sure it’s a dark film in terms of its content but for visuals and audio, it’s definitely standout. However where this release shines is of course through the special features and this 2-disc release is filled with interesting extras. The special features really take you on an interesting journey on how the film was created, its characters and how the filmmakers linked the visuals to the original 1977 film. Definitely a riveting watch!

Rogue One: A Star Wars does have its flaws but the most part, it’s a gripping story with interesting characters and captures a unique moment in Star Wars history. It’s definitely a must have Blu-ray for fans of this franchise and by owning this 2-disc, it really allows you to delve deeper into this very entertaining and thoughtful story. So although it captures the original elements of the 1977 film, it also modernises it and that’s where Rogue One: A Star Wars Story excels.