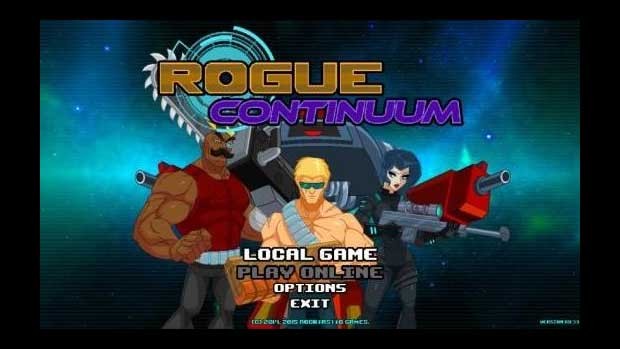 Summary: Rogue Continuum on PC serves as a nice distraction for gamers that harkens back to those classic shooters of the 80's with a modern twist thrown in for fun

Rogue Continuum takes retro-gaming to a new level in this top down shooter which harkens backs to games like Smash TV or for something a bit more modern, Hotline Miami. It’s over the top, a little violent in a comicbook way and would make Duke Nukem quite proud as players shoot, hack and destroy their way through a myriad of evil aliens while collecting power-ups, upgrading their skills and becoming total badassess! Add in 80’s clichés and Rogue Continuum is a fun distraction for PC gamers! The story of Rogue Continuum takes place in the year 2890 that sees the planet Earth destroyed by a powerful alien threat. Thankfully for humanity, a group of space soldiers are still alive and they have access to a prototype spaceship called the UEAF Hamer which allows them to travel back in time, 28 days to be precise in order to thwart this threat. So their mission is simple, go back in time and eliminate the alien threat with extreme prejudice.

Before jumping into the game, the player must first select which character they will control in Rogue Continuum which includes a space marine called Smackdown Sam, an ice cold sniper named Ownage Olga, a chainsaw wielding aristocrat dubbed Rampage Rufus and even a homicidal robot labelled Destructobot. Each of the characters have their own pros and cons which definitely goes back to those classic 8-bit top down shooters of the groovy 80’s. So once you have chosen your character, you can basically jump straight into psychopathic mayhem of over the top violence and more enemies than you can poke a lightsabre at. The combat in the game can be played via a keyboard/mouse combo, however Rogue Continuum is best played with a gamepad because it gives the title a much more fluid and arcade experience.

Given that, Rogue Continuum also has parallels to those twin stick shooters that you find on the mobile-game front because the combat can be quite intense with aliens coming at you all different angles. Thankfully along the way, you can find power-ups and bonuses in order to blow these aliens to Kingdom Come. In terms of weapons, they are split between melee and ranged but using weapons that fire definitely make the game easier to play. To help with enemies, each character that you encounters displays their hit points to help with your strategy in defeating them. By killing enemies, you are given credits which can then be used to purchase new items like ammunition and limited power-ups. Apart from playing solo, Rogue Continuum allows you to play with three other people for both local and online play which makes for some fun gameplay as the enemies ramp up in strength. Thankfully if you die, you have access to time travel and the game does keep your attention through upgrades and skill trees. Furthermore, boss battles can be quite tough and like the game, they are quite over the top!

Graphically, Rogue Continuum isn’t the most impressive game on the PC but it errs more on the side of nostalgia which actually suits the ridiculous nature of the story and gameplay. To help with the story, Rogue Continuum does feature a great intro which puts the pieces of this game together. Audio works well with the gameplay as does the music which once again pays homage to those top down shooters of yesteryear. The voice acting is like Duke Nuken himself is at the helm!

Rogue Continuum is a fun little distraction for PC gamers and even though the game doesn’t take itself too seriously, there’s lots to do and kill in this game. For me however, I would have preferred to play this from the comfort of my own couch but apparently, there is a console version in the works! Nonetheless, it’s still fun!