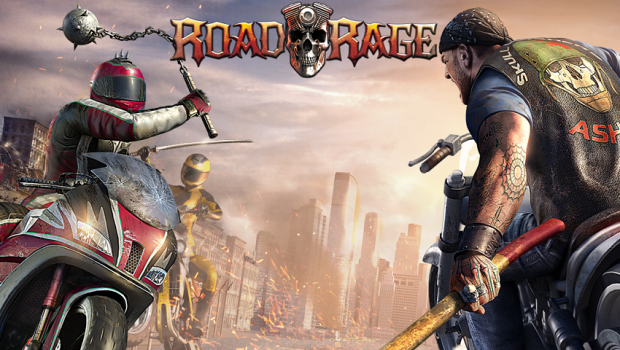 Summary: A lackluster attempt to fill the void left by Road Rash, it's the thought that counts right?

Road Rage, spiritual successor to Road Rash, racing, cops, cash, violence and sweet motorcycles. Sound like a great deal? Welcome to Ashen, a broken city with no rules. After a collapse of government each section of town is now under complete lockdown, the police patrol borders but stay relatively clear of enforcing law and order in each district. You are Ace, the newest recruit of a motorcycle gang with the ambition of ruling it all, ruling them all.

Starting off small, you take odd jobs here and there, the game gives you several story missions that involve doing slightly different tasks, some lap knockouts, some straight up racing, some pursuits and some assassinations (essentially just a beat ’em up). Outside of these story missions you can free roam, run people over, upgrade and purchase new bikes and weapons and take on side missions in the same categories of the main story missions. The gameplay is solid, there’s a lot of missions to do and the purchase of new and interesting weapons from weaponized selfie sticks to full blown shotguns make for fun combat, the bikes albeit a little odd in design are kinda neat and also allow for a decent amount of customization which is a very welcome addition, the content though is all too similar to each other so the game is best played in short burst, otherwise one might suffer the pain of repetition. There’s a distinct lack of variety in the missions, the few objective type modes are all incredibly similar, your race and knockout modes are exactly the same albeit with a competitor knocked out after each lap, your delivery and assassination modes are basically the same with different targets, and every mode has enemies you can bash anyway so even the race modes feel the same, the only unique mode is one where you have to evade the cops, simple and normally a menial task.

However it differs in the sense that you don’t find a hiding place per se as the cops have some sort of sixth sense and can find you through buildings, the easiest way is to simply get far enough for the required cooldown timer to start counting and just drive around at a moderate speed and keeping an eye out for and changing your route based on police locations on the minimap. It isn’t so much a Road Rash successor as one might have hoped, it’s more of a half baked cross over between Road Rash and GTA you don’t steal anything and you basically just ride around town beating people up. The graphics are fairly average, nothing to write home about but certainly no slouch either. The detail in most bikes and weapons speaks for themselves and the various districts of the city represent their respective themes well. The only real negative I had was that all the civilian vehicles regardless of location looked incredibly scrubby. The very first area; downtown, had exotic looking cars that I wouldn’t expect to see in such a rundown section of town, but the vehicles themselves were scratched and dented, to be fair that’s something you’d expect in such a district but the sheer fact it’s exotic car stands out. And this is a problem in other districts too, same exotic car, same scratched and dented paint job. There was no distinction within districts, no I can’t say that’s what they were or weren’t going for, if they were then they absolutely nailed it. But I would think otherwise. Above all that though the graphics are average in all respects, the meet the bar but do not exceed it.

The audio too, leaves quite a bit to be desired. It features the same four or five mediocre knockoff tracks on constant repeat, eventually it all becomes like irritating white noise, I found myself muting the music on multiple occasions. The voice acting is incredibly sub par, reminding me more of the voice acting I’d see on bad English adaptions of Japanese visual novels and the dialogue between each character isn’t even befitting the types of people they’re trying to be, it all seems painfully forced and completely out of pace. I don’t even think I have a single positive about the audio at all, except maybe if you like audio loud this game has you covered, the base audio value had me lower my TV’s volume to at least half the normal value I’d listen to other games at simply because the audio was so loud. The bikes sound like bikes and the weapons all sound close enough to what they should, but the remaining audio is so lackluster that the accuracy of these is overlooked and goes unnoticed. In conclusion, for a team that brought you games like Sniper Elite, WRC4 and most recently Farming Simulator 17, the game really falls short of the talent one might have come to expect from the publishing team. The game has its moments, but never really becomes more than a short burst of time filling between major games, at the best of times it just works, other times it can get glitchy, sure it’s easy to control the bike, but for one reason or another the AI can’t do it to save their lives, it doesn’t help that their as light as a small child and have about as much physical tolerance as one too, one hit can be all you need to dethrone your competition only for them to get back up and get stuck in a wall, or to the back of a parked car.

As a result it’s not a game I could sink hours into and keep coming back for more, I struggled just to play more than a few initial hours and a second burst of just two. The repetition and painfully irritable audio had me moving onto my next title that much quicker. If I were to give a few pointers to the team in the hopes to reclaim my attention, I would say a bigger diversity in mission types and more content, perhaps, no, definitely a better sound team on hand for the future. I don’t normally give bad reviews, normally I can find a little something to keep me going, sadly however not this time. It was a shame too, I’ve been so looking forward to the potential new Road Rash, maybe I just need to try more of the game but it’s just not winning me over.