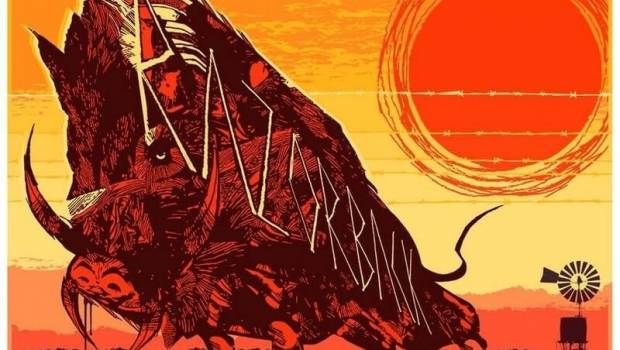 Summary: Razorback gores its way back onto screens. A must have for any Blu-ray collection.

Umbrella is back with an OzPloitation flick for Beyond Genres Volume 4 and it’s an absolute cracker, mate! Razorback was one of the early 80s horror films to get made in Australia and develop a cult following overseas. It is a quintessential film by Russell Mulchay that adapts Peter Brennan’s boring novel into a fun and occasionally quite confronting and brutal film. Umbrella have really done a great job with this release. Razorback was released in 1984 to lukewarm reviews, but soon gathered a cult following on VHS. It stars Bill Kerr as Jake Cullen, a respected pig-shooter who loses his granddaughter to a giant razorback, a wild-boar. Nobody believes that such a huge feral pig could cause such carnage and he is tried for murder and acquitted. His reputation left in tatters, it isn’t until two years later when American reporter and conservationist Beth Winters (Judy Morris) ventures to the same outback town to report on native animals being slaughtered for pet food. After she is slain by the same giant razorback, her husband Carl Winters (Gregory Harrison) comes searching for her. Carnage and slaughter ensue in a menacing and hostile environment. Razorback is a natural horror film with a strong environmental message throughout. It is directed in a frenetic and offbeat almost surreal manner. Russell Mulcahy is best known nowadays for his work on the Teen Wolf TV series, but he first cut his chops as a music video director in the 70s and 80s for Durran Durran, Elton John, Icehouse, and Dragon amongst many many others. Mulchay is also behind cult classics Highlander, The Shadow, and Ricochet. Razorback was his first feature film. Mulcahy’s background in music videos led him to experiment with form and story-telling in a variety of ways. In some, scenes he develops tension by using crowded scenes with of sneering faces and sexist gibes such as when Beth first ventures into the local pub to chase down a lead. Benny and Dicko (Chris Haywood and David Argue) are dressed like outback punks, with Dicko almost like an extra from a Buggles video clip. This stark contrast, rather than being absurd, lends the film the tone of dystopian and apocalyptic thrillers like Mad Max. A vibe that Mulcahy doesn’t shy away from. For example, when Carl is abandoned in the desert and has to stumble his way back to civilisation, his hallucinations are rendered together with Daliesque surrealist images and Ray Harryhausen style dynamotion. It’s an excellent combination that really develops the story and the setting. While being immensely entertaining.

The acting isn’t great, but that adds to the film’s appeal. Gregory Harrison does a solid, if very hammy job as the bereaved and bumbling widower out for revenge. Judy Morris employs a terrible accent as Beth, and has some stilted lines but works as the strong-willed journo.  Haywood and Argue are great as the over the top brothers Dicko and Benny. Argue’s Dicko really steals the show and is by the biggest pig in the film. One of the reasons Razorback holds up so well is that it’s about more than a giant pig hunting and gutting people. It presents a rather scathing criticism about the way we exploit the environment. It does it in a fun and exploitative way, but it is clearly a strong underlying message. Even more relevant is its pretty stark portrayal of Aussie male identity. Produced in a time long before Toxic Masculinity and #metoo became synonymous with the push-back against shithouse male behaviour, Razorback takes the menace from films like Wake in Fright and Mad Max and lays it firmly at the feet of the myth of the outback Aussie bloke.

All of the men in the film are flawed. Carl is both bumbling and single-mindedly fixated on finding the truth about Beth to the exclusion of everything else. Jake can’t let go of the past. Benny and Dicko are colossal macho dickheads who embody the worst male behaviours found in Aussie stereotypes. And unlike other films, there’s nothing about Dicko and Benny that makes them remotely likeable: they’re sadistic misogynistic creeps. It’s compelling that Mulcahy makes them seem like bigger pigs than the title character. The portrayal of these two brothers, who use violence and threats to bully their way through life and exploit everything they encounter is very close to the bone. Rather than being dated, echoes of their behaviour can be seen in disturbing rates of domestic violence and the bullying culture that infests the Aussie political class. They’re clear influences on Mick Taylor and  The Killing Ground’s German and Chook. Razorback’s commentary on the myth of the “Good Aussie Bloke” is something that is especially pertinent today, possibly more so now than ever. The special effects in Razorback are very much like those in Jaws. The razorback appears only in glimpses. Mulcahy uses jump cuts and fast cross-cuts to keep the scenes frenetic and full of action. Some scenes employ strobe lighting and when the big pig does appear, it is only in shadow or shot from unusual angles. And it works, like Jaws, Razorback’s thrills and spills hold up well 34 years later.

The Blu-ray release is tops. There are stacks of special features. There’s a new remastered version of the film in 4k and then there’s also the original VHS cut in 4:3 ratio to take you back to your VHS childhood. The restoration has a great commentary by Mulcahy and horror scriptwriter Shayne Armstrong. There are two great featurettes: Jaws on Trotters and A Certain Piggish Nature; as well as an abundance of interviews and deleted scenes complete with commentary. Razorback was a pivotal moment in Aussie film and is one of the great films of OzPloitation. Rewatching this fantastic remaster and its bountiful special features make it clear why Spielberg, Tarantino, and Gunn considered it one of the great moments of cinema. It has inspired countless other films and has contributed to the legend of Aussie cinema. Do yourself a favour and go get a copy of this ripper of a rerelease!