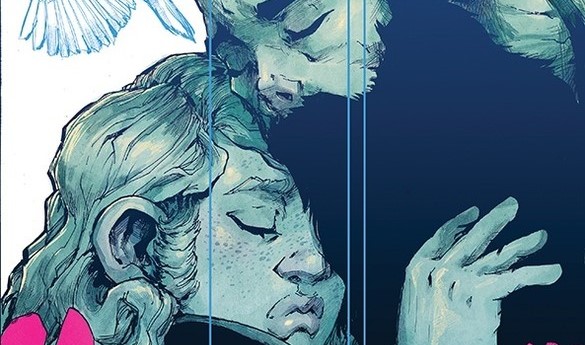 Summary: The Queens stand together to face the Flesh cult.

The concluding issue to this arc is here, heralding the departure of Kurtis Wiebe and Owen Gieni from Rat Queens.

Straight into action with this issue, as we see Violet hacking and slashing her way through the Flesher leader, trying to bring this creepy bastard down. However, he doesn’t go down without a fight, making it a tough slog for the Queens, but with their combined strength they overcome and eliminate this guy once and for all. Violet’s attention is quickly drawn away from the scene of carnage and directed towards Orc Dave who is pleading with his flesh corrupted son to stay with him. It’s a tragic and heartbreaking moment, as the young boy runs away from his father, leaving him a broken man. Whilst this is unfolding, we see the remaining Queens recovering after the fight. Hannah is now missing one of her arms, which Dee tries her best to heal, but unfortunately, because of the corrupted dark magic used to injure her, is unable to regrow her arm fully back.

Meanwhile, Braga and her brother finally come face-to-face with one another, allowing years of hate, anger and anguish to finally be released. Braga learns the truth behind what happened to her tribe after she departed, and how her brother allowed himself to become corrupted by the Fleshers. It all comes to a highly emotional and intense climax, with the Queens coming in to support Braga and open a can of whoop-ass on this skanky twat. What follows is a little trickery and deception, a whole lotta dirty talk, a bunch of sex and even a wedding. Good times, indeed.

Oh my, Kurtis and Owen’s run on Rat Queens is over, leaving a wonderful, moving and hilarious legacy that has all the feels. I’m sure that Ryan Ferrier and Priscilla Petraites, who are slated to pick up the Rat Queens gauntlet, will do a wonderful job on the series and characters that many of us have become incredibly fond of…Anyhoo, enough of that, now time for me to chat about this issue.

I left out a lot of details in my breakdown regarding this issue, mainly because I want to avoid spoilers for you guys. This is an intense issue, beginning fast-paced, and slowing down as the narrative progresses. The pacing is spot on in my opinion, and perfectly captures all of the poignant and heartfelt moments effortlessly. I’m looking at you Orc Dave and Vi. Heavens, I love these two characters together, as they make me so damn happy. I really feel like most of the Queens grew a lot throughout this and the previous arc, especially Dee and Betty. These two in particular faced some pretty hectic challenges that each overcome and grew stronger as a result. I enjoyed seeing this personal growth and development, finding it to be particularly fulfilling and satisfying.

Owen Gieni’s art is once again lovely, reinforcing the highly emotional intensity of this issue. I enjoyed how this issue wasted no time and opened with an intense fight sequence, throwing us directly into battle along with the Queens. I found the panelling during these fight sequences to be quite diverse, cutting in an interesting angles, which allowed for some compelling perspectives. It also helped to makes these scenes feel fast and edgy, as the eye easily travels from panel to panel in a fast and fluid way. Once again though, it was the tender, heartfelt moments that touched me most and stood out to me in a profound way. I have always believed that Gieni does a wonderful job at capturing the emotions and personal nuances of these characters so well. Well done, for me, it was very touching to see.

Overall, I thought that this was a strong end to this arc. Enjoyable, satisfying and heartfelt, it was what I was hoping for when entering this final issue of Kurtis and Owens. Thanks guys, I love your work!