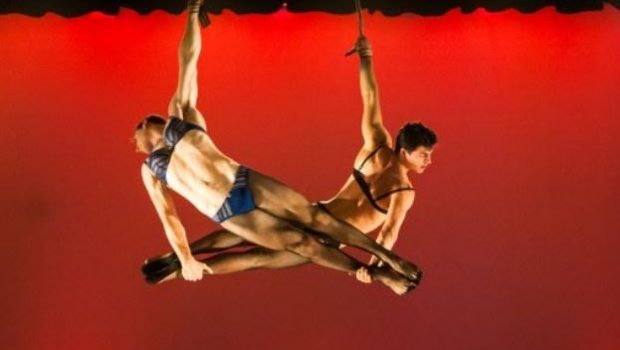 How did you become involved in NICA?

After ten years of training youth circus at Warehouse Circus in Canberra I decided to audition for the National Institute of Circus Arts in 2014. I was accepted into the three-year Bachelor program specialising in Aerial Straps, Handstands and Banquine (throwing people high in the air and catching them again).

If you could have any dream job in the world of circus arts, what would it be and why?

Ideally coming out of NICA, the one job I would want in the world of circus arts is to be a performer. I’d love to gain experience in a heap of different companies because I know each has its own performance style and creative process. There are some really inspiring Australian companies making waves all over the world at the moment such as Gravity and Other Myths, Company2, Circus Oz, Pants Down Circus and Circa, all of which I would love to be a part of if I ever got the chance. I also currently work with four other performers [read friends] running a company of our own together called Poncho Circus. Creatively it is so fulfilling having a connection to the process and the work you’ve created and Poncho allows us to do that. I would love to one day be touring with Poncho and affect people the way all the companies above have affected me.

Studying at NICA, what is your speciality?

At NICA we have two solo specialties and one group specialty. Aerial Straps is my main specialty. It’s similar to Gymnastics rings, except there’s no actual ring. You essentially tie your hands in and do a whole lot of dropping and spinning. Second specialty is Handstands and my group specialty is Banquine – throwing people high in the air and catching them again.

Did you have any experience before joining NICA?

From 2004 until auditioning for NICA in 2014 I had been participating in classes at my local youth circus, Warehouse Circus. These classes gave me a lot of experience; juggling, tumbling handstands, plate spinning, acrobatics, teeterboard, aerials and more that I’ve probably forgotten. These general skills were an amazing foundation but I was by no means a specialist in anything, one of the many reasons I chose to further my training at NICA. Coming into NICA I had no experience in Straps, however, they have quickly grown to be my favourite specialty. What’s the best aspect about NICA?

Moving. I love to move. I couldn’t do a degree that involved any more sitting around than our days at NICA (about 2 hours). Being able to run, jump, flip, split, hang and throw and push yourself is what I love about NICA.

Empty Bodies… how would you describe this amazing performance?

All encompassing, existentialist, poignant, and sublime.

Could you describe your role(s) in Empty Bodies?

Being an ensemble show I had many, many roles, these are my main ones: In Handbalancing our role was to represent a human, new to the world and nude; unmarked by any societal tags or identifiers such as names, clothes, genders, labels etc.  In straps I was a lingerie-clad character, his cheeky joy and rebellion juxtaposed by societies persecution. Banquine saw me as no one in particular – just another person passing through different relationships in life. Some of which were short but passionate, some grew over time into something strong and lifelong and some were forgotten. I also had cameos in multiple other acts ranging from a midlife crisis dancer to being packed away like metaphorical human garbage.

Before the live show, how long did you practice with the other performers for Empty Bodies?

Before the show, as a year group we had been working together for about a year and a half. This was mostly working on skills and group work, nothing specifically show related. Zeb, our director, came in early 2016 to run our performance classes. He explained the show to us then but we didn’t start working on Empty Bodies until the end of June 2016.

Tell us the biggest challenge you had in Empty Bodies?

For me personally, the biggest challenge throughout the creation process was the fact that all the content was being created at the same time. Up until now, if I had created an act I would have an idea and music and maybe even a costume and these would all be a basis for the content of the act. However, in Empty Bodies all we had was what the director had told us. This is because at the same time we were creating content there was (an extremely skilled) composer creating music based on the same idea and an (amazingly talented) costume/set designer sourcing garments for the act. Having only an idea from the director to create with was really difficult but looking back I think it was definitely for the best. The fact we only had an idea meant we weren’t influenced by the music or costumes until later, once we had really encompassed what the director’s vision was. It also meant external factors like music and costume were tailored to the act we had created rather than vice versa. I think this ensured the director’s ideas were maintained throughout the entire show and not diluted by other elements influencing the process. In my opinion, one of the reasons the show affected so many people the way it did.

The season. Seeing the way the show resonated with people and all the varied emotional responses. Also learning from the creation process about how to make a show that is honest and entertaining at the same time.

Lastly, where do you see yourself in 10 years’ time?

Still in this amazing circus industry. Hopefully helping to create work whether that is in a directing or performing capacity.