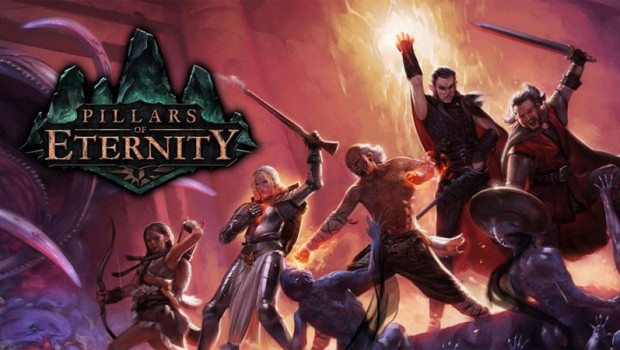 Summary: Pillars of Eternity is indeed great fun for RPG players young and old, and you don’t need a $2000 beast to play it on either

The first thing you’re reminded of when you start up Obsidian’s new RPG Pillars of Eternity is that it’s a labour of love. The game was put together with the money and collaboration of near 77,000 Kickstarter backers, all with the same burning desire –to see the Baldur’s Gate style RPG make a triumphant return. I know just how they feel too. I was one of those gamers in the late 90s who loved my Baldurs; many a happy hour was lost to playing through both BG1 and BG2 and the Icewind Dale series. The stories were brilliantly crafted and the pause-and-play combat style set a template for many RPGs to come. Rest assured, the top-down isometric nostalgia comes flooding back as soon Pillars of Eternity starts up. Obsidian are no slouches; the development team behind Fallout: New Vegas and South Park: The Stick of Truth have put together not just a clone of a 20 year old format, but a loving tribute with a few clever enhancements. If you know the BG format, you’ll see PoE have stuck very closely to it, right down to the design of menu windows, sound effects, fonts, layouts, icons, even the character portraits look as if they found the same artist who worked on BG!

You begin by creating your character in the traditional Tolkien/D&D style world (i.e. human, elf, dwarf, halfling etc.) Yes, there are a few tweaks to make PoE seem unique – here they are called Aumaua and Orlan for example, but there’s no fooling this fantasy veteran. For example, there is a race called Godlike, which are similar to the horned race in the Elder Scrolls series, but really, there’s no mind-blowing departures from the standard tropes. There are however plenty of options to make your PoE character unique, more so with diverse class system than the physical design, which seems still very much stuck in the 90s. Don’t expect Skyrim/Dragon Age stuff here, it’s a choice between beard or no beard, blue robes or red robes etc. Anyhow that doesn’t really matter. The game starts up and you’re quickly reminded that your hero is just a little figure surrounded by a great big isometric world. Immediately a deep sense of exploration hits you. Huge maps shrouded in the RTS fog of war invite you to search out every nook and crevice and see what might be hidden. Obsidian’s art team have done a wonderful job of creating beautiful landscapes, and moving through them is a pleasure. You explore a rich and diverse world: pre-rendered environments laced with an engaging story and characters bring the game quickly to life. As soon as PoE’s plot kicks in, and you find yourself caught up in… well… I won’t give it away, but rest assured this game is not just a Diablo style dungeon-crawl, there are immediately and throughout choose-you-own-adventure style choices that affect the already elaborate story, your play-style, and even how NPCs react to you. Ultimately you sculpt your own story. Your character is asked to side with various factions using a reputation system, where your actions and choices have consequences which affect the ultimate outcome of the game.

Your party builds (and shrinks) from between one and six members as PoE goes on, and that old Baldur’s Gate thrill of leading your own band of companions across a wild realm and into the depths of monster-infested dungeons in search of treasure and mystery comes quickly back. You utilise five core skills to overcome most situations: Stealth, Athletics, Lore, Mechanics and Survival. These are confusing at first, but soon explain themselves naturally through gameplay and how each mechanic is applied. Unlike traditional RPGs, experience points aren’t automatically doled out for combat success; PoE prefers to reward successful story, encounter and puzzle resolution. Just grinding your way through a dungeon on a kill-fest is not a fast ticket to levelling up. PoE is all about experiencing a story that has hack-n-slash elements, and not the other way around. There are two things you need to know going into PoE. First the lesser issue – because this is a Kickstarter game, don’t expect to see elaborate, movie-quality CG cut-scenes. Instead Obsidian have done a very fine job with narration and illustrated stills which work just as well. A special shout-out also needs to go to the music team. PoE features a rich orchestral soundtrack that feels lifted right from the Peter Jackson school of over-the-top choral fantasy epic-making, and it works a lot better here than his awful Hobbit movies. The second issue to consider is text – do not buy PoE if you don’t like to read, because you will be – a lot. The game wants to feel like a fantasy novel, and half the screen with be often dedicated to elaborate narratives, descriptions, and conversations. They are all very well-written, and if it’s your kind of thing, you’ll quickly be immersed. But if not, you’ll find yourself clicking through reams of text and growing more frustrated at each.

There is only one real gripe I have with Pillars of Eternity, and it’s nothing poor Obsidian can ever fix – it’s not Dungeons & Dragons. A large slice of the joy in playing the old 90s RPGs is that they used all the D&D rules, classes, monsters, environments, and worlds. Exploring the Forgotten Realms (that’s the name of the D&D world, kids) was a treat because if you were a nerd like me, you already knew it. There was no research or study needed, no game mechanics to get your head around, it was just the pleasure of seeing the tabletop game finally given the love and respect it deserved on PC. If PoE’s success manages one thing, I’m hoping it’s a wake-up call to whoever now owns the D&D license. They need to see what brilliance their property was once capable of, and what could be achieved again. Still, let’s not take anything away from what Obsidian has achieved all on their own. Pillars of Eternity is indeed great fun for RPG players young and old, and you don’t need a $2000 beast to play it on either. I thoroughly recommend it to anyone who’s looking for a deep and involving experience, and has the time to give it the respect it deserves.