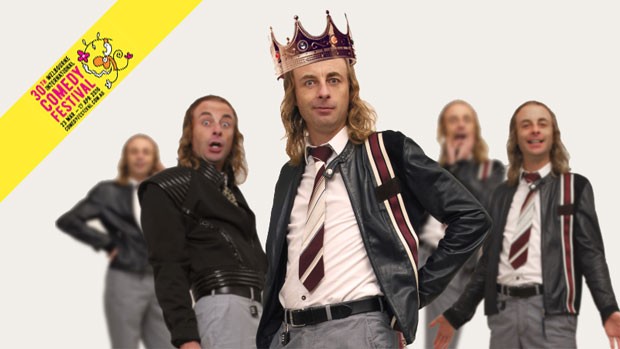 Impulse Gamer caught up with comedian extraordinaire Paul Foot who we like to call “The Emperor of Comedy” on the eve of his 2016 Melbourne International Comedy Festival show. His current show “An Evening With Paul Foot” runs from 12 April to 17 at the Melbourne Town Hall that will be filled with laughs and will make you question reality itself!

You’re back in Australia for the 2016 Melbourne International Comedy Festival, so can you tell us a little about your current show “An Evening with Paul Foot”? Are we going to see more of your famous disturbances?

Yes we’re definitely going to have disturbances in the show this year and with silly pictures on them that I’ve been painting recently to be ready for Australia.

Can we get a bit of a sneak peak of some of the disturbances that may be on display from tomorrow night onwards?

Let’s have a look! We have “Horse Jesus” that is like a horse but crossed with Jesus. We have “Crazed Frog Jenkinson prepares to assassinate his son” but his son is actually a vase, whereas he is a frog. There’s also “Professor Ketchup and his Camembert Piglet”! “Showbizness insight for you. Living it up backstage with a sandwich in the bogs. People say I’m like Mary Carey”

Will these disturbances be sale after the shows?

They will be for sale from tomorrow night and they will have humour on the back and pictures on the front.

How did you come up with these disturbances?

Care to share one of your favourite disturbances with us?

We’ve been to your shows before and we’re wondering how do you pick an audience member to partake in your show?

So what’s the difference between the Australian and British audience?

The big difference is if you perform in Britain, you hear people come in and say “Better not sit too close to the front… more jam!” and if you do one in Australia, everyone says “G’day… let’s go down the front Sheila” and they love going down the front which is the point I’m making as they are all enthusiastic to get involved. There are some great audiences here in Australia! “Just looking at my Australia show diary! Come and see me in April! AN EVENING WITH PAUL FOOT, it promises to be at least both of those things! #MICF”

Have you ever found yourself lost on stage and maybe gone a little bit off track? Do you ever have these problems as a comedian?

It would be nice to think that I sometimes have the problem where I go off track and forget what I’m doing but I’ll let you into a show business secret which is when I’m on stage, I’m actually slightly more in control than I might look <laugh>. I actually have slightly more idea of what I’m doing than it might appear.

You’re at a new venue this, is it bigger?

Last year I was in the Hi-Fi and this year I’m in the Lower Town Hall. It’s exactly the same size venue… actually it’s bigger, it’s got ten more seats. It’s very close to the other venue, maybe 26 yards from the Hi-Fi and in case you don’t know what yards is, it’s 26 metres and just across the road. Actually, this will not be relevant to the audience because they go in the public entrance but I have to go into the stage entrance to get onto the back stage which is through a disused ladies toilet. So everyone will now know that I’ve been to a disused ladies toilet which is the showbiz way.

Do you know if it’s working?

Actually it’s operational and once or twice when I’ve been in that venue before, I officially used the ladies toilet on the way to do a show. Obviously I was dressed as a woman to do it and then I had to dress myself back as a man.

So what are you most looking forward to tomorrow night?

We’ve also noticed that you’re a social media fan… so what draws you to this?

I love Twitter, Instagram and Facebook because I can share things from my life and it’s fun to be able to just do things and share it. The other thing is and the advantage of being famous is that you’re never lonely because any time day or night when I send a message, there’s always someone somewhere around the world who’s awake and reads it and then posts something about it. It’s marvellous really.

Give me one more chance!” shouted Marsupial Seaplane, as he flew straight into a cheese diamond. For more information about Paul’s Show at the Melbourne International Comedy Festival, please visit http://www.comedyfestival.com.au/2016/season/shows/an-evening-with-mr-paul-foot-paul-foot and don’t forget to become a fan of his at https://twitter.com/paulfoot, https://www.instagram.com/barrygoose/ and https://www.facebook.com/paulfootcomedy