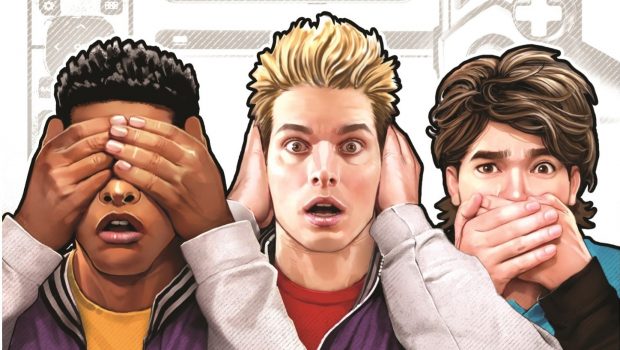 Coming soon from AHOY Comics is the action-adventure comedy Planet of the Nerds, written by Paul Constant with art by Alan Robinson and Randy Elliott.

Paul recently chatted to Impulse Gamer, where we got to talk about his love of the 80s, the difficulties of writing from the perspective of jocks, his plunge into the comics industry and much more!

Without giving away any spoilers, can you tell us what Planet of the Nerds is about and introduce the key players?

Planet of the Nerds is an action-adventure comedy about three jocks who, in the year 1988, get cryogenically frozen in a freak accident. When they’re thawed out in the year 2019, they are horrified to discover that nerds rule the world—computers are everywhere and everyone is a fan of superhero movies and the richest men in the world are the exact same Poindexters that jocks like these used to knock around in the halls of high schools. Naturally, our jocks are out for revenge.

Our three main characters—the jocks—are Chad (the ringleader with an anger management problem) and Steve (our point-of-view character) and Drew (the secretly smart jock who goes along with Chad’s bullying in order to fit in.) At first blush, they all seem like stereotypical antagonists from a 1980’s movie, but as the series goes on, we’ll discover that they each have more going on than we first expected. Am I safe to assume that you are a nerd yourself? That being said, was it at all challenging writing from the perspective of these jocks?

I am totally a nerd, and always have been. I had to wear glasses in kindergarten, I knew more about comic books than anyone else in my school, and I was as socially gifted as a potted petunia. I had a few run-ins with jocks, but I was relatively lucky so far as bullying went—I was more  ignored than anything else.

At first, writing from the jocks’ perspectives was pretty tough. But as I kept thinking about my own high school experiences, I remembered that I could be quite a jerk, too. I made fun of kids who I perceived to be different than me. In fact, right after I finished writing Planet of the Nerds, I reached out on Facebook to a guy I went to high school with and apologized for making fun of his heavy-metal hair and t-shirts. He didn’t remember any of it, but he was very nice about hearing from someone who hadn’t spoken to him in decades.

Anyway, I think these labels—jock and nerd—are kind of vague, and like all labels, they can’t really define the full extent of our character. Most of us have been bullied in one way or another, and most of us have been a bully at one time or another. Once I realized that, I had a lot more compassion for the boys at the center of the story. I love character design that I’ve seen so far. Can you tell us a bit about the process of working alongside the artists when creating them?

I wrote the first script without an artist assigned to Planet of the Nerds, but as soon as AHOY Comics editor-in-chief Tom Peyer suggested Alan Robinson, the writing immediately became easier. Alan is a maestro of nuance—he’s an expert at facial expressions and conveying complex thoughts in just a few lines. And he’s got an uncanny knack of drawing exactly what I’m picturing, only better. I think the only note that Tom and I had for Alan’s initial character designs were minor 1980s touches: he had to make Chad’s hair bigger, Steve’s hair more feathered, and the waistlines of the pants had to be a little higher. But he had the spirit of the characters down perfectly from the get-go. Nostalgia is a big part of the 80s for many people, especially recently as we see the rise in popular reworkings of iconic 80s films, TV series, characters and even toys. Am I correct in assuming that the 80s holds a special place in your heart?

I grew up in the 1980s, and so of course I have a fondness for those years. The Bill Mantlo/Bob Hall/Al Milgrom run on Peter Parker, the
> Spectacular Spider-Man will always represent my favorite take on Spider-Man. I grew up watching all those weird cartoons that were just glorified toy commercials, like Silverhawks and M.A.S.K., and of course there were some fantastic movies—Gremlins, Back to the Future, They Live.

But I always kind of bristle at nostalgia, because it often feels like a lie to me. Ready Player One -style nostalgia for the 80s ignores a lot of the problems of the decade: it was a lot more racist and a lot more sexist than we remember, the AIDS crisis and the crack epidemic were completely mishandled by the government, mental health care took a nose dive, and so on.

So Planet of the Nerds sort of walks that line between nostalgia and reality by butting the 1980s right up against 2019 and seeing what happens. What I hope is that both pop culture buffs and cynics alike will be able to discover a new perspective through this book. I know that you’ve been working in the book industry for many years,but this is your first foray into the world of comics. What was it that made you take the plunge?

I’ve been lucky enough to make a living through writing for most of my adult life—I’ve covered presidential campaigns and interviewed famous authors and reviewed a ton of movies and books—but I’ve always had an itch to write comics. In fact, if you’d asked me at age 10 what I wanted to be when I grew up, I’d have said I wanted to be a comic book writer, so this really is a dream come true for me.

The way I fell into comics is that Tom Peyer, the editor-in-chief of AHOY Comics, used to read my writing when I wrote for an alternative weekly here in Seattle. He reached out and asked if I’d had any ideas for a book, and I pitched him *Planet of the Nerds*. Tom has been a fantastic teacher, and he’s assigned me lots of short comics and backup stories with a stable of brilliant artists to really learn the craft. I couldn’t ask for a better education. My favorite thing about comics has always been the collaboration. I feel such an explosion of joy when I get a page back from Alan that surpasses my expectations and brings something new to the script that I never imagined. And then when Felipe Sobreiro’s colors are added to the mix, the art gains an additional dimension and becomes even more real—he’s doing some next-level work on this book. And then Rob Steen letters the whole thing, and his word balloons guide your eye across the art and it really becomes a story. Meanwhile, Randy Elliott has drawn all the backup stories, which focus on individual characters, and his work has a slightly edgier, more alternative comics style that interacts nicely with the main story.

Taken all together, it’s somehow bigger and better than the sum of any of these parts. Watching all these layers of talent land on top of something that I wrote—I don’t have any other way to describe it. It’s magic.

Thanks for taking the time to chat with us Paul!

PLANET OF THE NERDS will be available for purchase April 17, 2019.