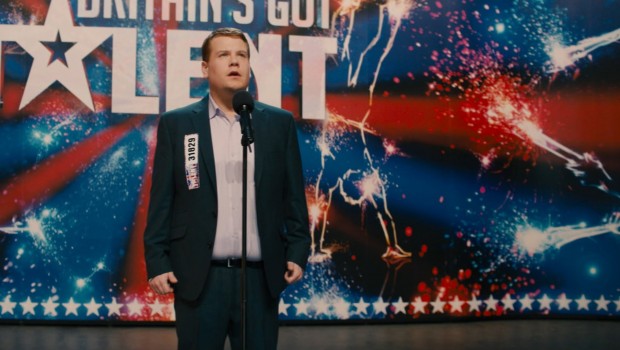 Summary: One Chance is a very enjoyable and emotional film from start to finish!

One Chance is the delightful true story of 2007 Britain’s Got Talent winner Paul Potts (James Corden) that against all odds somehow managed to achieve his dream and become an opera singer. Director Justin Zackham also successfully introduces Paul through flashbacks to his youth that had him being bullied by the local boys for not just his weight but also his passion for singing. Unfortunately his father Roland (Colm Meaney) believes that something is wrong with his son due to his love for opera and as a result does make his life hell growing up. Thankfully his mother Yvonne (Julie Waters) and his newly found love Julz (Alexandra Roach) believe in him but when he finally gets the chance to attend opera school in Venice, he freezes and is dismissed by the late Pavarotti. Returning to Britain devastated, Paul finally gets the courage to sing again thanks to his partner Julz but once again life throws another obstacle in his path and he is unable to complete his performance in Aida. The film successfully shows the ups and downs of Potts who is played brilliantly by James Corden and also draws you into this real-life story. Even though we all know how the story ends, it is an insightful movie that will have you laughing and crying about one man’s determination and the supports around him that helped him become one of Britain’s most famous opera singers. Other strong performances include Alexandra Roach as his girlfriend/wife, Colm Meaney as his prick of a father and best friend Mazkenzie Crook who plays this quirky character that helps with the light hearted nature of this script.

One Chance is a very enjoyable and emotional film from start to finish!