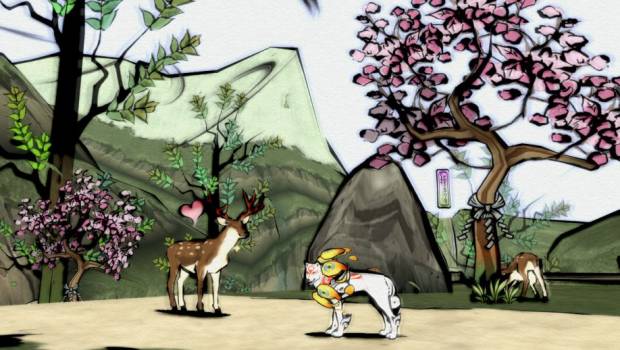 Summary: Quite simply... Okami HD on the Switch is a beautiful experience from start to finish.

The indie hit Okami (HD) has arrived on the Nintendo Switch as players are transformed into Amaterasu, the Japanese sun goddess who must vanquish evil from the beautiful lands of Nippon as a white wolf in this action platformer that balances combat, exploration and puzzles…. she also has a sidekick called Issun who acts as a helper for the player as well. However, more importantly, Okami HD has been well-ported from the more powerful consoles onto the Switch and thankfully has some of the innate controls from this console which include; Although Okami HD works really well in the tablet mode, sometimes the attention to detail is lost due to the screen size of the Nintendo Switch. It is still playable, albeit at times a little smaller. However Okami HD is perfect when your Switch is connected to a TV.

Before jumping into the gameplay, a special mention should be made about the graphics which really celebrates the art style from Japanese culture and given the story behind the game, it’s quite a visual treat on this console with some spectacular colours used to bring it to life plus the use of cell-shading. Audio effects are equally as impressive as is the musical score. So in other words, this is pure art on the Nintendo Switch! Complementing the art is the story that goes hand-in-hand with the graphics and the gameplay as you control Amaterasu and explore the land in a similar fashion to Zelda Breath of the Wild while you remove this curse and defeat the villains. It’s also quite a long game (30 to 40 hours) which really gives you great value for money and my only criticism is the introduction of Okami HD that seems to go on forever and forever! Nonetheless, it does serve as a good tutorial.

At its core, the game is an action puzzler as you control this magical white wolf who is given some divine instruments to help return this world to life, including dicing and slicing your enemies. So while the platforming mechanics work well (better in TV mode), there’s also plenty of puzzles to help keep your brain challenged while you’re not engaging with the diverse enemies of Okami HD. So while this Japanese goddess can run around the environment as this white wolf, including the ability to jump and even headbutt, the main control mechanics is the celestial brush. This allows you to paint the screen with her tail that by creating patterns gives you access to new spells. Using this mechanic is done through the touch screen (which is perfect) or via a Joy-Con if docked. The celestial brush also helps bring colour back to this world and is quite a unique game mechanic. The combat allows for different types of attacks plus some fun boss battles, however where this game shines is through the puzzles and exploration. Okami HD is literally a beautiful and fun game to play on the Nintendo Switch that celebrates both ancient Japanese culture and this console which is a match made in gaming heaven. The story is interesting, even though it can be a little long winded at times and the gaming environment is a pure joy to explore, especially when matched with the mechanics and controls of this title. All in all, Okami HD really kept me invested from start to finish and if you’re looking for something a slightly otherworldly, this is the game for you.