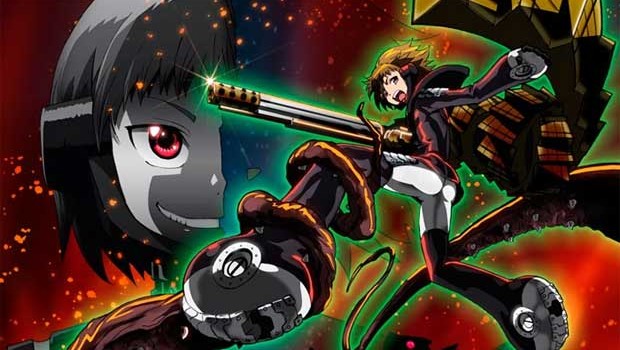 Summary: Nobunagun: Complete Series is a little clichéd and gives the viewer a standard yet entertaining anime romp with a touch of fan service

Nobunagun is your stock standard anime series that involves high school, monsters and covert government agencies who are trying to save the world. However the catch with Nobunagun is the inclusion of specialised agents known as E-Gene Holders who basically wield legendary weapons with the spirits of historical figures in order to combat these alien usurpers. The agency that rules over these agents is called DOGOO who have been preparing for this invasion for centuries and once these weapons are linked to the agents, they create powerful warriors. We also learn that this organisation was founded by an alien who lost their world to these invaders and as a result wants to help mankind.

Cue protagonist Shio Ogura, a normal high school student who is drawn into this deadly world of E-Genes and Monsters and to compound the situation for our reluctant hero, she is actually a holder of this gene which is unleashed when she tries to rescue a friend. As a result, she becomes infused with the legendary Oda Nobunagun and joins the DOGOO as a student and then agent. From here, the stories do become a tad predictable but what makes Nobunagun: Complete Series shine is the crazy Japanese humour that almost feels like something out of a Farrelly brothers film which also boasts some truly kick-ass action scenes. There’s also some fun world building happening and I enjoyed the characterisation of Ogura, this relatively innocent high school girl who becomes this powerful warrior through the course of the series, even though she keeps her “humanity” through the bond of high school.

Ogura also has an unhealthy interest in weaponry and once she becomes attached to her E-Genes souls, she definitely relishes in the excitement and battle lust. It’s also fun to see this character grow, even though she probably hoped for a more normal life. To compliment Ogura’s character, we also have Asao, the school’s favourite student plus some other legendary characters that include Jack the Ripper and even Galileo plus Ghandi himself for something totally unusual. Another interesting aspect of this series is the animation that definitely has its own unique style and sets itself apart from other anime releases. Also, given that this series is limited, the ending of Nobunagun ends on a high without leaving too many unanswered questions for the viewer.

The series is well presented on Blu-ray with a 1080p widescreen transfer that boasts sharp images and a great colour palette. Audio supports Dolby 5.1 which includes good levels, including a balanced soundtrack and sound effects. It also makes good use of surround sound, especially with the battles but the main thing is that the dialogue is clear. For special features we get some episode commentaries (Episode 1 & 13 with some of the cast), textless songs and the US trailer. All in all, there’s just a handful of extra that are well worth the exploration. Nobunagun: Complete Series is a fun anime series that doesn’t take itself too seriously and contains over the top action, violence, humour with a touch of fan service. It’s a fun watch on Blu-ray that I could happily recommend to fans that want something easily digestible without complex plots or twists.