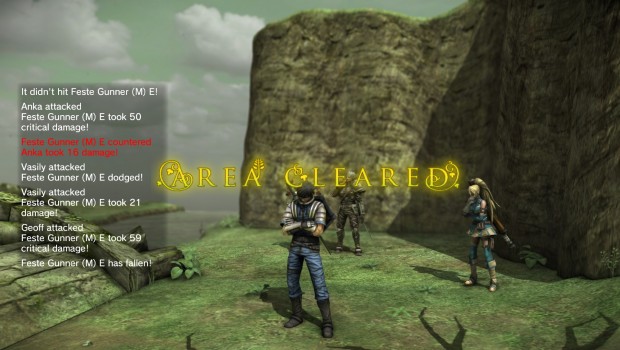 Summary: Natural Doctrine is a cruel, unpolished, but interesting spin on tactical RPGs

Natural Doctrine—bizarrely stylised as NAtURAL DOCtRINE—is an incredibly unusual game. While its narrative rests upon tropes typical of role-playing games, most of the gameplay conventions of tactical RPGs have been trashed in favour of some very creative and innovative new ideas. The result is an undeniably unique (and gruelling) experience, but also a divisive one.

Even calling Natural Doctrine a tactical RPG feels inaccurate; the combat system is so punishingly complex that it feels more like a limited-answers puzzle game than something requiring player strategy. Player characters and enemies alternate turns, and every unit gets a single action per round; however, nearly every action taken—both ally and enemy alike—allows other units on that team to take their turn early, or to get a second (or third, etc.) action. For example, queuing an attack against an enemy will prompt every allied character who could conceivably target the same enemy to make a move. If the character hasn’t moved in the current round, then they will expend their initiative for this round by participating in the attack. But, if the character has already taken action, then they will be allowed to act again without any penalty to the next round of turns. Through clever execution of this—and careful targeting of the next enemy to act—players can become an unstoppable force, continually building upon the number of allies in the fray. Confused yet? I still am. What’s worse is that Natural Doctrine’s own explanation of the battle system is nearly useless. Trial and error will be your best friend—or, perhaps, your worst nightmare. Mastering the system, and then successfully executing your plan, requires nothing short of saint-level patience—something I seem to lack. I lost count of the number of times little mistakes resulted in the entire enemy force chaining together actions to decimate my team. The death of a single character results in a game over; Natural Doctrine takes sadistic pleasure in utterly crushing your spirit. This is all compounded by how tedious battles can be. You fight in drab, dreary, and often large locations against identical enemies with obnoxiously long battle animations. Finishing many maps requires the entire party to stand within designated zones; prepare to spend several minutes moving each character their allotted two zones of movement and ending their turn, all so you can finish an enemy-less map. It was infuriating trying to determine whether the game wanted me to advance my characters slowly, as a team, or rush headlong into battle to secure the initiative. In the end, Natural Doctrine wants both: move quickly, as a unit, lest enemies gain the initiative and pick off the stragglers, but don’t you dare miss or, oh, whoops, you advanced too quickly and activated a mid-battle event and now there are reinforcements and your forces are divided and the gorians are going to kill you dead. The gorians, for the record, are the big bad of Natural Doctrine: carnivorous, underground-dwelling insects hell-bent on eating absolutely everything that moves. With so simplistic a major villain, it’s no surprise that the rest of the narrative is uninspired. To its credit, there are some interesting moments where humanity’s arrogance and racism/species-ism is mentioned, but the game never really escalates beyond ‘crazy man-eating bugs are going to kill everything’. The entire plot is delivered through conversations, either after battle or, quite interestingly, during battle. It would be a positive point—the absolute absence of traditional cut scenes in favour of dynamic in-battle cutaways—if not for how clunky combat-less movement can be.

Natural Doctrine has this underlying ‘survival of the fittest’ motif running beneath its plot. This makes the number of allusions to Christianity stick out a bit; more than one of the characters is named after a saint. The pilgrimage that main character Geoff embarks upon, to become the hero humanity needs but not really the one it deserves, feels spiritual as much as physical. But, ultimately, these allusions do little to enhance what is already a paper-thin plot. The characters are similarly flat. Their motivations are exclusively revenge or boredom until the gorians begin to present a credible threat, and then survival becomes the biggest factor. Ingbert is potentially the most interesting character, yet his motivations as a villain are entirely unexplained; later, he becomes just as bland as the rest of the cast. Perhaps the most reductive character is Vasily, a tough, sensible fighter whose incessant ‘HEY, GEOFF, LOOK AT ME’ renders her the least likeable party member and undermines the positives of having a capable female warrior.

The graphical style is reminiscent of table top games; the character models all look like little painted models. This curious but positive design choice is entirely offset by the obnoxiously intrusive user-interface that leaves very little of the screen actually visible. Coupled with the generally bland locations and drab colour palette, Natural Doctrine is not a very pretty game. Which is a massive disappointment, given how gorgeous the world map art is; the first start menu art that I saw, of Vasily overlooking ruins on a field, with mountainous forests in the distance, created an extremely positive expectation for the visual quality that was repeatedly let down. There is a multiplayer mode in the form of a card game. I was unfortunately unable to test this, but it seems like the general consensus is positive. It is strange, however, that there is no competitive multiplayer mode based on the actual combat system; that seems like the most logical format for multiplayer, and it would have been quite a positive experience playing against another fallible human, instead of the superhuman AI in the campaign. Natural Doctrine, from a gameplay standpoint, is incredibly satisfying when you’re in command of the battlefield and controlling the initiative. But the second that disappears—when enemies start dominating, when you have to retry a map, or when you have to hoof it to a specific zone—Natural Doctrine becomes tedious and frustrating. The battle system’s core concept is clever and unique, so dedicated and patient fans of tactical RPGs will probably enjoy such a novel experience. But the clunky user interface and unyielding difficulty reveal a poorly executed product and make Natural Doctrine almost inaccessible for newcomers.