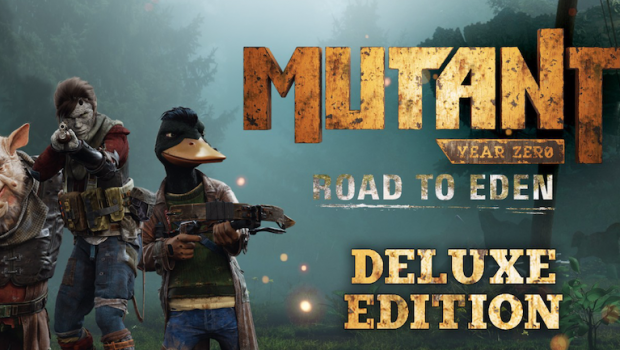 Summary: Mutant Year Zero is a great tactical RPG adventure. However, the Switch version is a truly disappointing port.

This review is going to be a rough one because I think Mutant Year Zero: Road to Eden is a great game, but the version released for the Nintendo Switch is extremely disappointing. I’m going to do my best to get across how much I like the story, the gameplay, the world and the characters of Mutant Year Zero, whilst also contextualising the horrible graphics and poor performance issues that are unique to the Switch version. The main point I want to get across in this review is that you should definitely play Mutant Year Zero, just not on the Switch. Mutant Year Zero is a turn-based, tactical RPG with a dash of adventure game storytelling added to the mix. Think of X-Com: Enemy Unknown’s gameplay and strategy elements combined with a Gone Home style of wandering adventure. You play as a group of Stalkers; combat-trained scavengers that explore the remnants of a post-apocolyptic world for resources to ensure the continuing survival of the Ark. The Ark is a ramshackle city constructed to provide refuge for those that survived the plague that wiped out most of humanity and is led by The Elder. There’s a lot of corny pronouns used in that last paragraph, but the lore and world building in Mutant Year Zero is genuinely fascinating. As you explore the world and encounter new enemy factions, further details will be revealed about the events that led up to the apocalypse and the various factions that managed to survive the wasteland. Some of these details are revealed through fully voiced dialogue sequences between characters, others are revealed through various other notes and mementos left throughout the world for you to find at your own pace. As you explore the world in your squad of Stalkers, the characters in your group will discuss recent events or talk about new areas you’ve discovered. These dialogue sequences feature some impressive voice acting, which makes these characters quite endearing and their adventure that much more engaging. There’s also a lot of genuinely funny moments where these characters ruminate on strange relics of the past that they come across. My favourite example of this is when you encounter a hospital filled with corpses that have succumbed to a plague and the group finds evidence to conclude that the victims were killed by a race of evil creatures called “stoo-dents”. Gameplay is broken up into two distinct parts: exploration and combat. When you enter a new area you’ll have direct control over each member of the squad and you are free to explore the area at your own pace. In this phase you’ll be collecting any scrap you find to purchase upgrades back at the Ark, as well as scoping out any enemies in the area. All the dialogue and world building is done in this phase so it’s quite enjoyable to scour the entirety of the map, though the movement is a little slow. Once you spot an enemy you’ll be prompted to enter stealth mode, which allows you to sneak up closer without being detected. Once you get close enough, you can position each character in the perfect place to stage an ambush. If you attack a group of enemies without being revealed, you’ll gain a stealth advantage, allowing you to attack first and offering a number of potential bonuses to combat. When the combat phase begins, a grid is revealed on the world and the familiar X-Com: Enemy Unknown gameplay comes into full swing. Characters have action points that limit what they can do in a turn; moving, reloading and attacking all cost one action point, while sprinting to a distant location costs two. Characters can also take cover behind objects, which dramatically affects their chance of getting hit – so standing out in the open will ensure that enemy attacks have a 100% chance to strike damage, whereas ducking behind cover may reduce that chance to 50%. The success of an attack is determined by this strike chance and will be both a blessing and a curse – there is nothing more infuriating than missing that crucial shot when you had a 75% chance to hit. As you defeat enemies you’ll receive experience points to level up. Levelling up provides stat points that can be used to unlock perks for your character called ‘mutations’. These mutations can range from simple bonuses to health, to powerful abilities that can be used in combat to grow wings or briefly control enemies. It’s a fun system that allows you to spec your squad to match your play style and offers a lot of depth when combined with the various equipment loadouts you can also customise for your characters. Everything mentioned in the above paragraphs is what makes Mutant Year Zero so compelling and is applicable to all versions of the game. Unfortunately, I’m now going to delve into the Switch-specific issues that make the Switch port so disappointing. The most egregious and blatantly obvious focus of my complaints are with the game’s visuals. Mutant Year Zero looks fantastic on the PC, with lots of detail in the world and some great lighting effects. On the Nintendo Switch, Mutant Year Zero looks like a blurry mess. Everything from the lighting, the textures and the resolution has been significantly downgraded in order to make the game function in portable mode. Surprisingly, the game looks just as bad when playing docked. I also experienced a number of crashes in my time with the game too. Usually, I can deal with poor visuals if it doesn’t affect the gameplay – and to the credit of Mutant Year Zero on the Switch, the game does run at a consistent 30fps. However, the blurry visuals actually have a significant detriment to the gameplay in other ways. For example; when you enter combat, an opaque grid is superimposed on the ground that indicates where characters can move – the blurry graphics make it very difficult to distinguish the boundaries of this grid, which means you’ll spend a lot of time moving around the map and squinting to see if that area is accessible or not. Also, when exploring the world and searching for scrap, the collectible scrap stashes can be difficult to notice with such poor resolution. The Nintendo Switch version of Mutant Year Zero: Road to Eden also comes bundled with the Seed of Evil DLC expansion, which adds further campaign missions to the playthrough. Due to time restrictions I didn’t get a chance to go through this content, but I will gladly sink my teeth into all the Mutant Year Zero story and lore that I can get my hands on. Mutant Year Zero: Road to Eden is a great game. The familiar tactical combat is fun, challenging and offers genuinely thrilling gameplay. The lore of the world is fascinating and the characters are well-written with charming personalities. Plus the exploration and upgrade cycle of the gameplay loop is thoroughly engaging. Unfortunately, for the Nintendo Switch version of the game all of this is spoiled by blurry visuals, ugly textures and various performance issues. I heartily recommend picking up Mutant Year Zero on the PC or your console of choice, however the Switch version just isn’t worth your time.