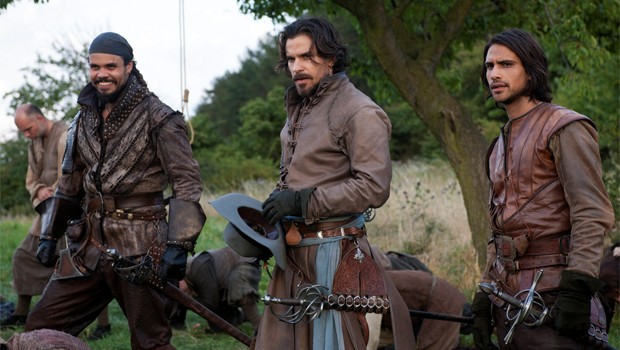 Summary: The Musketeers Series 2 on Blu-ray is superior action television with a hint of class that only UK television can bring

With the success for the first season of The Musketeers, anticipation has run high that the cast and crew have been able to repeat that success in season two.

With the departure of Peter Capaldi to play the role of the Doctor in Doctor Who, a new nemesis for the Musketeers had to be found.  Early in episode one, the Musketeers save a man from summary justice, only to discover it is an old, previously unseen enemy and ally of Cardinal Richilieu– Marc Warren’s Comte de Rochefort. The first episode plants the seeds of the numerous plots which flower over the course of the second season.  Rochefort is not all he seems, and as he insinuates himself into the French Court after escaping from Spanish imprisonment, his nefarious plans and schemes begin to poison those around him.

Standing in his way are the Musketeers.  A little older, a little more battered after the events of season one, the Musketeers still stand for right and justice in the French court.  As is common in television today, events in the past now run into the future, allowing each character to develop and grow.  Aramis (Santiago Cabrera), for instance, who committed adultery with the French queen and fathered the heir to the French throne, has to deal with the double anguish of not being with the woman he loves and not being able to openly acknowledge his son.  Unfortunately for Aramis, it is secrets such as these that the Cardinal traded in before his death, and now Rochefort is heir to those secrets, which he uses to further his aims.

While the main througline in the second season is the battle between Rochefort and the Musketeers, there is time for diversions into other stories which allow the supporting characters the chance to shine.  Episode two, for instance, allows King Louis the conceit of escaping the confines of court to allow him to experience the ‘delights’ of the lives of his subjects.  Of course, things rapidly go pear shaped as the king falls into the hands of slavers.  (Ryan Gage) as the weak-willed King Louis is a delight to watch, the character’s inability to commit to one course of action without being influenced by everyone around him a constant source of amusement and frustration.  Of special note is his smile, which has so many teeth it would leave one of the Musketeer’s horses to shame. Of special note is the proliferation of strong female roles in the series.  In earlier times, the female roles would’ve been filled by simpering, weak willed ‘peril monkey’s’ constantly in danger and just waiting for the rough embrace of their rescuers.  No more – the trio of strong women in this series – Queen Anne (Alexandra Dowling), Milady de Winter (Maimie McCoy), Constance (Tamla Kari) – all testify to the agency female characters are given today.  They are as flawed as the men around them, but equally so, they are as strong also.

Taking their inspiration from Alexandre Dumas, the famous writer who created The Musketeers, the makers of the series do not stint on colour, movement, action and adventure.  The set design is sumptuous, and the work that has gone into costume design is nothing short of splendid.  As in season one, the series is shot in Eastern Europe, making liberal use of historic locations and some very beautiful location work in the woods and fields.

One of the key ingredients in these adventures is the swashbuckling fighting.  A combination of rough and tumble hand to hand and some very swish sword use, the stunt co-ordinators are to be congratulated for creating some very exciting action.  While liberal use is made of gunpowder pistols, their one shot nature means that swords come out in quick time.  The stunt work is exemplary, as is shown in the sheer energy the actors bring to the actions scenes. This is great television watching.  While the period detail and roles of women are not true to the actual history, who cares when the fake reality is this fun and entertaining?  While the action will captivate the kids, the very human drama played on the screen will bring the adults in droves.  And of course, lovers of the human form in both its genders will linger long over the very, very pretty actors populating the screen…

Overall:  superior action television with a hint of class that only UK television can bring.  Sumptuous design and location shooting combine with great action and villains who you can happily yell ‘boo’ at all night long.  Perfect viewing for the long, cold winter nights. 4/5

Visuals:  colours are vibrant and leap from the screen.  The high definition detail gives the viewer a greater appreciation of the work done in design the costumes for each character.  Details are sharp, blacks aren’t crushed and remain deep.  Excellent use is made of natural light on location, and overall, the quality of the visuals is hard to beat. 5/5

Sound:  every clash of the sword is captured, the clip clop of horses resonates, and the dialogue is crisp and never lost in the soundtrack.  Everything is clear through the speakers and the swelling music counterpoints the action nicely. 5/5

Extras:  a nice selection of brief looks behind the scenes of the making of series 2.  Of particular interest is the Music of the Musketeeers, which shows the development of the series’ soundtrack from initial conception on a keyboard to the use of a full 60 piece orchestra in Prague.  Three brief vignettes take us behind the scenes to the construction of the escape sequence in episode 1, as well as the underwater scene in the same story, plus the battle sequence in episode 5.  Finally, we look at how the sets for the Queen’s apartments and the Astrolabe came about, with particular reference to the excellent work of the local craftsman who contributed so much to the realisation of the sets. 3/5