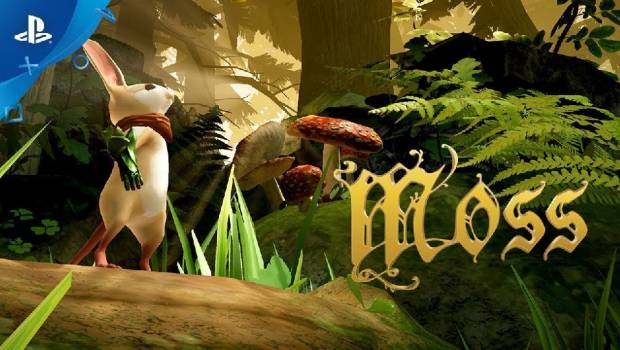 Summary: Moss is a whimsical and awe-inspiring journey through a magical land, where the true possibilities of the marriage between traditional gaming elements and virtual reality is put on clear display for all the naysayers.

An enchanting journey through the world of a living storybook, Moss could very well be PSVR’s finest experience to date, although the truncated running time may be a bitter pill to swallow for some. Perhaps Moss’s most surprising achievement is with how easily it eschews the almost prerequisite first-person viewpoint most VR games adopt and shows that third person adventure and platform titles not only work on the format but can in fact be bolstered by the technology in order to deliver a stunningly unique and immersive experience.

Although Moss follows the trials and tribulations of Quill, the adorable sword-wielding mouse, the player actually assumes the role of “The Reader”, an omniscient towering giant plucked straight from a Studio Ghibli film; silently observing our hero, The Reader occasionally takes on an integral role to the plot itself, manipulating certain elements of the environment in order to assist Quill’s progress. The name of your character is rather apt, as Moss is presented to the player as a literal fairy tale, being pored over by The Reader in the austere confines of what looks to be a giant cathedral; rather than be inundated with cutscenes, the player physically turns the pages of an ornate tome as the soothing voice of the narrator plays out the role of each and every character. It’s a simple and rather effective way to progress the narrative and works a delight here.

Each stage is a visually impressive three-dimensional diorama in which you navigate Quill through, often with unseen secrets tucked away for the inquisitive to find; as you progress through the game you’ll discover small scrolls, some of which are in easily accessible areas and others that take a little bit more creative thinking.

One of my favourite moments, which occurred outside of any of the main levels, was when I reached down to put my controller on charge only to notice the scrawl of graffiti tucked away beneath the desk upon which the Book of Moss lay. The story is rather barebones, although it doesn’t lack in narrative thrust – Quill must embark upon an adventure in order to locate her missing uncle Argus, the caretaker of an enigmatic relic known only as the Glass, which serves as the connective bond between The Reader and Quill.

With Argus’s disappearance looms the threat of the return of a terrible evil long banished by Quill’s uncle, a voracious serpent with a desire for destruction, but together you and your furry little friend will discover that great strength can lie within even the smallest of heroes. Moss bucks the recent trend of VR games predominately being built around use of the Move controllers, putting the Dualshock 4 front and centre as the only option. Whilst this allows for easy movement of Quill using the analogue sticks, the tracking for the light bar proved to be more than a little problematic when acting as The Reader.

Allow me to explain – Players control quill as you would normally but, when the game calls for it, The Reader must also interact with certain items by holding down R2 and using the gyroscopic capabilities of the Dualshock to pull chains towards yourself, push blocks around, raise shields and much more. Often you’ll be performing these tasks while simultaneously moving Quill around and can stun or even possess enemies during the later stages of the game, reminding me more than a little of the dual character control scheme of Brothers: A Tale of Two Sons. The issues I mentioned beforehand tend to become more apparent during these more intense sections in which you must protect Quill, move her about safely and control a possessed foe, with many moments arising where I’ve reached in to “touch” a certain part of the level only for the orb that represents the player to go wildly careening around the stage as the camera struggled to pinpoint my precise location; despite changing my set-up numerous times I couldn’t find a way to effectively mitigate this issue, which was a bit dejecting considering how polished Quill’s movements felt in comparison to the clunkiness of operating The Reader.

This is obviously more of an issue regarding the limitations of Sony using light-based sensor tech for the PSVR, which becomes frustratingly evident any time this or any other game entails raising your hands in front of the headset, obscuring its lights and inevitably causing the tracking to go haywire. The puzzles are all relatively straight forward and reward lateral thinking and you’ll never be stumped for more than a couple of minutes on any given level.

The combat can be fairly basic and was, for me, probably the weakest aspect of the game, although taking control of cannon wielding enemies and using them to blast their former comrades as you deftly dart about the level evading attacks with Quill never failed to be oddly satisfying. The audio is simply superb, with the stereoscopic soundtrack really helping to sell the immersion. The chirping of birds in the forest, the lonely whisper of waves lapping the shore of a long deserted beach, the little moans and grunts of your fuzzy companion as they hoist themselves over a section of collapsed ruins – Every sound, no matter how small, is pitch-perfect and evocative of Moss’s fantastical world.

Of particular note is the narration and voices, which are all performed by the same woman; aside from lending the game a more personal, bedtime story aesthetic, the calibre of the vocal performance deserves commendation as each and every character has their own clear and distinct personality despite sharing the same actor. Graphically, Moss is the most visually stunning PSVR game I’ve played to date. I say this a lot, often while making concessions for the graphical limitations of the format, but Moss is genuinely the most lavish and simply gorgeous titles I’ve had the pleasure of playing in VR.

Quill herself is by far one of the most impressive aspects of Moss, with the combination of the tiny white mouse’s use of body language and sign language and superb animation imbuing her with real character. With the advent of VR games, I assumed that the best experiences would, logically, be those with a first-person perspective, and as such wasn’t all that interested in Moss when it was first announced. After all, how could a third-person platformer be any good when you can play games where you literally inhabit the main character?

Oh, how wrong I was.

Moss is a whimsical and awe-inspiring journey through a magical land, where the true possibilities of the marriage between traditional gaming elements and virtual reality is put on clear display for all the naysayers.

Whilst it would have been nice to maybe have the option to manipulate the environment using the moves rather than being constrained to the DS4, I understand that  controlling Quill simultaneously would have been nearly impossible otherwise. The biggest complaint I have with Moss echoes that of seemingly everybody else – It’s just way too short, especially as it’s so damn good. You only just start to feel like you’re really getting into things before BANG! The credits roll and even the not so subtle sequel set-up fails to relieve the yearning I was left with for more Moss.

Even with this caveat, however, I have no qualms recommending Moss to each and every self-respecting PSVR owner – You owe it to yourself to embark upon this rodent rescue mission.