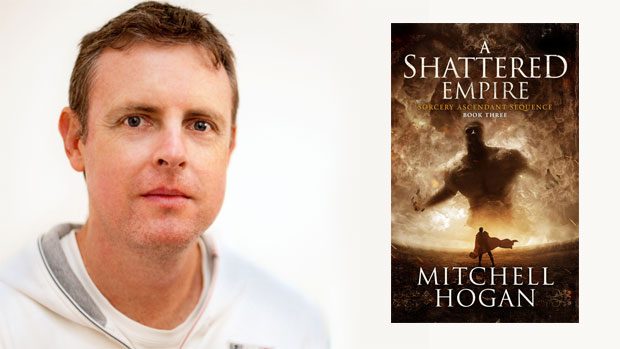 Welcome to Impulse Gamer Mitchell… can you tell us what drew you to become an author?

I’ve always read a lot — mostly fantasy and sci-fi — and I’d always wanted to write a book based on the ideas I had floating around in my head. My main motivating factor to actually sit down and finish writing the book was that I didn’t want to regret not doing so. I didn’t want to be an old man on my deathbed thinking “I really wish I’d taken time to write that book”! So I took steps to ensure I had time to write, which meant quiting my job…  Not a decision to take lightly. The first draft took way longer than I thought, mostly because I’d bitten off far more than I could chew by starting with an epic fantasy series. But with a lot of revising and some professional editing, the end result appealed to the majority of readers — and that was fantastic.

What about the fantasy genre?

I was drawn into fantasy by reading many great coming of age stories. The protagonist usually starts with a great loss or alienation — perhaps they’re an orphan, or they begin to manifest magical powers which sets them apart. They are then forced to pursue knowledge — about their past, their powers, to find out who or what he/she really is. A dangerous journey ensues, one where the hero broadens their horizons by going out into a perilous world. It’s a journey of self-discovery, of physical and/or mental maturation, of moral growth. Innocence is transformed into experience. And in fantasy novels, anything can happen.

Growing up, who were some of the authors that inspired you?

Raymond E. Feist, I read Magician soon after The Lord of the Rings and this was the first modern (at the time) fantasy novel I’d read. Ursula Le Guinn, A Wizard of Earthsea opened my eyes to more character driven fantasy, and this story is one about self-discovery and of acceptance of the darkness that is inside all human beings. A story about the fascination with knowledge and the temptation of power. Guy Gavriel Kay, The Fionavar Tapestry, my first “portal” fantasy, where modern day people bringing their modern ideals into a sword and sorcery age. All five take unique paths, some darker than others.

All three of these authors showed me what was possible with fantasy, and I have never been able to get enough of good epic fantasy since reading them! Your latest book SHATTERED EMPIRE is the last book in the series and without spoiling the story, what’s the general theme of this current novel?

The final installment is really about the temptation of power, and the sacrifices people make in order to protect those they love, and what they hold dear. The protagonist has already transformed from the naïve man he was, and is coming to grips with the power he wields.

In relation to your series, was SHATTERED EMPIRE planned from the beginning in terms of its ending or did evolve over the years?

It definitely evolved! I’m usually a discovery writer, a “pantser”, and most of the time I have no idea where I’m going when I start writing a book. As a series progresses, the path becomes clearer as certain things have to happen to resolve plot points, and characters take you in un-thought of directions. But at the final book stage, you have to alter your thinking and writing process, since you can’t keep adding new conflicts and tensions, you have to focus on resolutions.

Who is your favourite character in the series and why?

Definitely Lady Felicienne. She was great fun to write, and usually I kept thinking “I should have the main protagonist do this”! I wrote a novella from her POV recently, as a few readers told me they’d love to read more of her backstory. Felicienne is something along the lines of a spymaster/information gatherer/pattern recogniser, almost like a not-quite Sherlock Holmes. She’s believes in something greater than herself, and would do anything to preserve her beloved Empire, even if it means going against the Emperor himself.

Can you explain your world-building progress?

The first thing I do is create a magic system for the world/universe. Since I love magic, it always forms a critical element of my stories. From that point on, I flesh out the people and organisations surrounding the use of magic. Then I like to take a look at the universe as a whole, and decide on elements that would make the world unique and interesting. What’s been your biggest reward in this series?

Gaining so many readers who love my books and the world I created. Writing is all about the readers, and to have thousands of people buying and enjoying my stories is wonderful. It is the readers who enable me to keep writing, and for that I am eternally grateful.

Editing, revising, editing, revising, and re-editing… I originally self published the first two books, and they went through many revisions and editing  passes. Then when I signed the series with Harper Voyager, the two books went through their editing process. I spent around 6 weeks full time (and long days they were), revising each book after HV’s edit. And these were books I never thought I’d have to touch again. It was still interesting, and a learning experience, but it was challenging to focus on books I thought were already in great shape.

In relation to writing this current book, how do you manage to successfully give your heroes and villains souls?

You have to give the reader enough of the details of their backstory to give them an idea of what they went through to become who/what they are. My major villains are not POV characters, so it’s difficult, but you can use other characters to convey information. Ideally, the reader finds out exactly what they went through, and the decisions they made, which set them upon their path. Of course, you could just have an evil which is evil for unknown motivations, and then they don’t have to have a soul…!

Last but not least, what does the future hold for Mitchell Hogan in terms of writing?

Many more books to come, hopefully! I’ve finished the first draft of a book set in another universe, and have begun writing the second. After that, I really want to go back to my Sorcery Ascendant world and write another series. I’m writing full time now (technically, as I have two young daughters which divides my time…), so a couple of books a year isn’t out of the question.