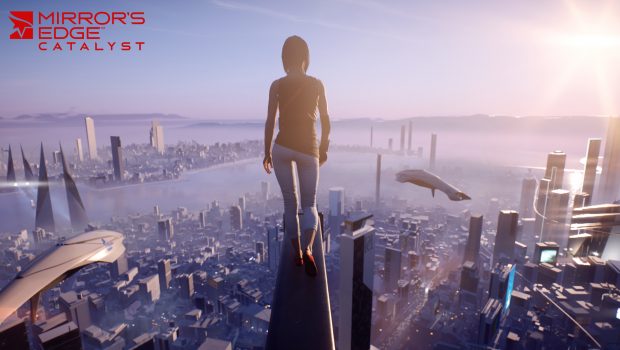 Summary: Some curious design decisions dampen the whole affair and the game suffers as a result.

Get ready to step back into the well-worn sneakers of City of Glass runner Faith Connors once again with Mirror’s Edge: Catalyst, the follow up to 2008’s underrated free-running action game.

Touted as a prequel/ soft reboot, Catalyst opens with Faith being released from juvenile detention and instantly slipping back into the life of a “runner”, illegal couriers that traverse the rooftops of the city delivering all manner of goods both legitimate and on the more illegal side. With Dogen, a shady crime boss, demanding Faith repay a debt incurred before she was incarcerated, our protagonist is left with no choice but to take running jobs in order to accumulate enough cash, or Scrip, as the game’s currency is referred to.

After an early job sees Faith come into the possession of a device containing information about KrugerSec, the totalitarian military force that governs the city, Faith and her companions soon discover that the head of KrugerSec has plans to activate a computer virus dubbed “Reflections” in order to control the emotions of the populace… Yeah, it’s a silly as it sounds and the narrative of Catalyst is definitely the game’s weakest point.

The cast of characters are fairly varied but lack any real depth and eventually end up being nothing more than one-dimensional mission markers in the grand scheme of things. The script tries to emotionally manipulate players to be sympathetic to Faith’s plight, interspersing the action with flashback sequences highlighting her troubled upbringing and painting her as a strong and resilient heroine with a chip on her shoulder, but unfortunately these ham-fisted attempts to inject a sense of pathos into proceedings fail to garner any empathy for Faith as she’s generally pretty unlikeable as a protagonist. Through a series of questionable choices, one gets the feeling that Faith deserves much of the trouble that befalls her, which doesn’t exactly endear the player to the character… And this is coming from someone who genuinely liked Faith in the previous instalment.

Thankfully the parkour mechanics are terrific, at least once you get to grips with the control scheme; using the left triggers for most of your movement can feel a little counter-intuitive initially but after five or so minutes it soon becomes second nature. The urban exploration aspect of the game is precisely refined and pulling off a perfect run is as exhilarating an experience as those found in the first game. The open environment is a nice evolution from the self-contained levels of the aforementioned game and the sleek and stylish aesthetic design of the city can initially seem like almost a character in of itself, which is good considering how barren it appears to be; as you’ll be spending most of your time bounding between skyscrapers, human interaction is understandably kept to a bare minimum.

This can be a double edged sword, as one the one hand it allows you to focus on the task on hand and not have your movements impeded by crowds of NPC’s but on the other it makes the city feel sterile and lifeless and removes the connection necessary to give the player an incentive to save the citizens from Kruger’s diabolical plan – It’s hard to care about the denizens of the City of Glass when you never even see more than a select few. Another issue is that the city lacks enough variation to differentiate each area from the next, which ironically can make you yearn for the tighter, more linear levels of the first game. The art direction has a nice, unique style but after a while everything honestly looks the same, and as seems to be the issue with many open-world games, there is an overabundance of superfluous side missions and collectibles that serve to give Faith a few experience points and nothing more.

The addition of “Runner’s Vision”, which highlights your optimal route in red, helps navigation not become too confusing but, while I personally appreciated the larger, interconnected aspect of the city, it ultimately works to the game’s detriment in the end. As Faith makes her way through the game she’ll earn experience points which can be used to upgrade one of three skill trees, Combat, Gear and Movement. Unlocking new moves for smoother traversal of the cityscape is satisfyingly rewarding and clearly reflected in the controls as you add to your parkour repertoire; enhancing your combat abilities is also a necessity, as there’s a much heavier focus on engaging enemies in this game than the first, which isn’t necessarily a good thing.

One of the most unique aspects of the first Mirror’s Edge was the choice afforded to players to play the game however they wanted to – Want to dropkick all and sundry? Fine. Want to go for a completely pacifist run and eschew violent interaction of any kind? Also entirely possible. Here players are forced to square off against KrugerSec personnel and others way too often for my liking. Faith builds up a “Runner’s Shield” that can absorb the brunt of enemy attacks to a degree but all too often you’re thrust into situations where fighting your way out is the only option for survival.

It’s the antithesis of the first game’s philosophy and, making things even worse, the combat just isn’t actually all that good, often boiling down to Faith darting about the place and placing a hit or two from her very limited arsenal of melee combos before having to climb to safety to regather her bearings. It’s just a very tedious exercise at times and lacks the flowing nature of the controls that DICE managed so effectively with her movement system. As mentioned above, Mirror’s Edge: Catalyst has a very distinct visual style that is a nice counterpoint to the dark and gritty game environments of other titles. The character models unfortunately don’t quite hold to the same standards and can look a little last-gen at times, most noticeably Dogen’s henchwoman who accosts you as you first leave Noah’s place.

The audio and soundtrack are solid but nothing really stands out, although Faith’s voice actress does do the best job she can with the material afforded to her; most of the rest of the cast rank from serviceable to downright annoying, with Icarus being probably the worst offender, both in terms of performance and characterisation. I really, really wanted to like Mirror’s Edge: Catalyst, and when the game lets me run wild and focus on building momentum and stringing together parkour moves, I genuinely do. Then I’ll be forced into some mandatory combat section or forced to sit through a monotonous cutscene and the entire game just grinds to a halt.

There’s a satisfying rhythm to the movement that is only rivalled by Dying Light and moments like when you’re climbing up a building that’s shattering all around you or staging an elaborate heist serves to highlight the true potential behind the game. Unfortunately some curious design decisions dampen the whole affair and the game suffers as a result, relegating the most entertaining elements to making intermittent appearances bookended by moments of sheer frustration or, even worse, boredom.