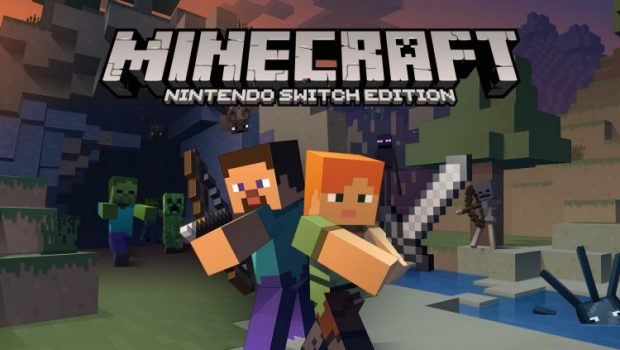 Summary: Minecraft Nintendo Switch Edition is a must have title on this console!

Minecraft is a true international gaming phenomenon and what started out as a humble indie-game in 2011 is now a worldwide hit and is available on a plethora of platforms and now the Nintendo Switch. Although almost identical to the versions before it, the Nintendo Switch edition is just as enjoyable and more importantly works very well in both TV and tablet modes.

Minecraft is also game that has no boundaries and allows the player to create some amazing environments from the majestic palaces of King’s Landing from Game of Thrones to Star Trek inspired environments that include the USS Enterprise. So don’t be fooled by the “block” graphics as the world of Minecraft is quite an addictive and enjoyable gaming experience. The controls work extremely well on the Nintendo Switch and the tutorial does a great job at teaching you the mechanics of the game. From there, it’s up to the player to succeed but you can expect a touch of frustration to creep into your gaming enjoyment. Having played this game on a variety of formats that include the PC, PlayStation 4 and the Galaxy S5, it’s always a joy coming back to this world and once again, Minecraft had me hooked on the Nintendo Switch. Due to the portability nature of the Switch, it’s also the perfect game to play on the go. For those wanting a challenge, the survival mode is fun as you attempt to keep the monsters at bay, whereas the Creative mode allows you to unleash your inner muse. Multiplayer allows up to 8-players online or four players via local co-op mode. If you have not played Minecraft before, you basically commence in a newly generate world that not only makes each game different but really pushes the imagination of the player.

Do you want to build your own actual virtual house or perhaps something a little grander like The Empire State Building? It’s all achievable in Minecraft that is almost like a virtual LEGO game that allows you to build your own world block by block. As mentioned, the game supports the original survival mode which requires you work for your creations and watch out for enemies or you can sit back and create your own masterpieces with the creative mode with no interference.

Given that, the first hour of the game could be considered a tutorial as it teaches the player the basic mechanics of the Minecraft universe such as crafting items, enchanting items or even creating workable circuitry in the game. Nothing is more fun than making usable items in this game but it is a little challenging at the start due to the enemies. This means you have to explore and either build or find shelter before night comes.

From here, you need to craft the world of Minecraft with your tools such as a pick to mine for precious ores or an axe to chop wood in order to build. As mentioned earlier, it is at night when the player is at risk of dying but fortunately you have a trusty sword but finding shelter is sometimes a better option. However if you explore at night, you can also be rewarded with chests and other goodies. As you defeat enemies, you’ll be given experience that adds a touch of RPG to the game and allows you to make better enhancements that as a result allows you to gather better resources. Graphically, the Nintendo Switch version of Minecraft looks like a very detailed game on this console with beautifully created environments that although may look like LEGO, it’s actually quite impressive to see how the developers have used simple blocks to create an interactive world filled with forests, skies, mountains, jungles and even deserts. To complement the engaging gameplay, Minecraft features a very soothing soundtrack that suits this genre perfectly. Minecraft is truly a success on the Nintendo Switch that boasts accessible controls and a glorious interactive environment that will keep players attention for hours upon hours.