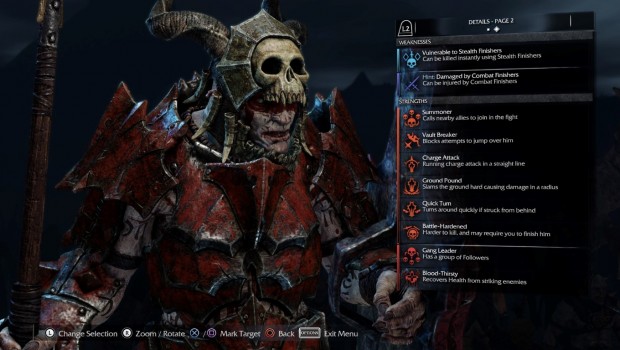 In Middle-earth: Shadow of Mordor, you play as grizzled ranger Talion as he fights to protect Middle-earth and avenge his murdered family. Despite the Tolkien trimmings, Shadow of Mordor suffers from an exceedingly common and uninteresting narrative. After watching his family be killed by the Black Hand of Sauron, Talion (who was also murdered, but ends up possessed by a wraith) sets out with the most masculine of motives: revenge. Along the way, his angst levels grow to new heights and he ostracises himself from every friendly character for poorly explained reasons.

The premise is uncharacteristically poor, given the lore of Tolkien’s universe. Of course, attempting anything exceptional or overly creative would have drawn the ire of nit-picky fans, so it’s a no-win situation. But if the plot suffered for caution, it makes the few transgressions all the more egregious; several lines of dialogue are lifted word-for-word from The Hobbit or The Lord of the Rings, each a poor-taste ‘reference’ snatching at fan appeal. Despite the primarily brown, grey, and more brown colour palette (with a touch of black for the ~evil~ vibe), Shadow of Mordor looks gorgeous. I was struck by how nice it was to gaze out upon the vistas of Mordor, of all places. I missed the swelling soundtracks from The Hobbit and The Lord of the Rings, but Shadow of Mordor’s music is far from a disappointment. The films follow the heroes and the music suits; Shadow of Mordor is very much about the orcs, and the soundtrack has an earthier, rawer tone to match.

So, the game looks and sounds great, but that doesn’t quite make up the undercooked plot. Finding out the wraith’s true identity will probably excite those with an interest in Middle-earth lore, but that’s about the most thrilling element. Fortunately, Shadow of Mordor’s narrative isn’t the major draw card; the gameplay is. Take the stealthy assassinations, free-running, and open world of Assassin’s Creed and infuse it with the fluid combat of the Batman: Arkham games and you have the basic concept. Unfortunately, Shadow of Mordor doesn’t particularly excel at either. Despite Talion’s supernatural agility, Mordor is not built for free-running; too often I was stuck running up a vertical wall at a slight angle, unable to catch hold, and there are lots of objects that don’t combine to create a nice parkour path despite being possible with real physics. Likewise, the combat doesn’t quite match the finesse of the Arkham games; Shadow of Mordor is more forgiving about the timing of button presses (which could be seen as a positive for some). But these are just rough edges on an otherwise satisfying system; Shadow of Mordor should be an easy transition for anyone who has played any of the Assassin’s Creed or Batman: Arkham games before. And Shadow of Mordor brings its own special ingredient that ties everything together: the Nemesis system. Each captain and warchief gets a name along with a collection of features and traits that mark them as an individual and a more challenging opponent. Captains also have ‘memory’: take out one with your bow and he’ll start wearing a helmet; get defeated by a random orc and not only will he be promoted to captain, but he’ll probably taunt you next time you clash. These orcs vary between games, meaning two players will probably never meet the exact same orc.

This hierarchy is not static; orcs will hold feasts, undertake trials, and duel each other as they jostle about for control and glory. Killing a captain opens up an opportunity for another orc to gain power, and captains will fight and kill each other to rise in the ranks. This ‘humanises’ the orcs and makes fighting them far more interesting. You get to see actual orc culture—yes, it exists—at play and experience this strange, non-human value system and society. The potential for emergent gameplay is immense. But then the system falls down a little. Changes to the hierarchy only happen if you die, interfere in specific events, or manually skip time at fast travel stations. This wonderful, nuanced, fluid system informing the complex hierarchy of the Dark Lord’s army is entirely static unless you, the player, allow the changes to happen. Granted, the orcs have enough agency to hunt you down and I died quite frequently at the beginning. But the better you become at Shadow of Mordor, the more the Nemesis system reveals itself to be a hollow shell. Once the ability to bend orcs to your wraith-enhanced will becomes available, the prospect of fighting a warchief no longer poses a challenge or thrill.

Fighting orcs in Shadow or Mordor is satisfying. Talion has an arsenal of cool tricks that make taking out enemies really enjoyable, and player death almost always enhances the experience by adding a new or improved captain to the mix. But only so much enjoyment can be wrung from a ‘dynamic system’ that you almost completely control. Once I had branded all of my named orcs, I killed them. Wiped the slate clean. Why? Because the greatest part of Shadow of Mordor is just existing inside its world, not being the centre of the universe. It pains me that it falls short of perfection in this regard. I wish, if nothing else, that orcs lived in real time. Living and fighting and dying in an organic, dynamic world is utterly spectacular. Shadow of Mordor can offer nothing better than that: the plot is average, and side missions range from the severely limiting ‘kill x orcs in this specific way’ to the unreasonably tedious ‘free these identical human slaves (again)’. But existing within this open world is a satisfying experience, purely because your enemies feel more rounded, more genuine. The Nemesis system is Shadow of Mordor; it’s as simple as that.