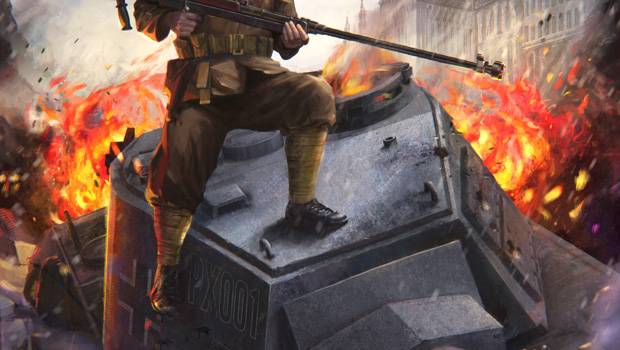 We chat with artist Matt Heath about his new Wargaming Project to celebrate the 4th anniversary of World of Tanks on consoles!

1. What does World of Tanks mean to you?

World of Tanks is massive! I first played it on X-Box 360 and it’s always been heaps of fun. I am really excited to be involved and really honoured to be chosen as an artist as Wargaming makes excellent art. 2. How did you get involved in World of Tanks?

I work for a Paris based agency and publishing house called ARTtitude. With other artists we worked on art for Paris Games Week the last few years and through PGW ARTtitude got involved with Wargaming. Four artists were chosen for this project and I am incredibly happy to be one of them.

3. Tell us where you got your inspirations for while working with Wargaming?

World of Tanks on Console has a series of War Stories, one of which is Operation: Sealion. This was the planned invasion of Britain by Germany in WWII that never happened. I thought it was a great opportunity to create an alternative scenario and imagine how it might play out.

4. What was the biggest challenge?

The biggest challenge was coming up with a good concept. I had a lot of ideas and it took some time to work through them before I even started painting. I wanted it to be really good as World Of Tanks is played by over 14 Million people Worldwide – that’s a big audience!

The process and the finished product. I really love painting which of course is why I do it but not everything works the way you plan. I got to a certain point where I could finally see it all coming together. Working through and getting to the finish is extremely rewarding. 6. How do you think your artwork complimented this game?

I feel my painting style complimented the game with a combination of realism, detail and painted art. All of Wargaming’s art is very dynamic, dramatic and well lit so I tried to incorporate that into my artwork.

7. What did you enjoy about working with Wargaming?

Everything has been great. The brief, the feedback and the positivity surrounding my work. Everyone is passionate and committed to creating the best game.

8. Lastly, what’s your favourite tank in World of Tanks?

The Panzer Tiger II, it was a really cool design for it’s time and was also built by Porsche which I think is pretty cool.